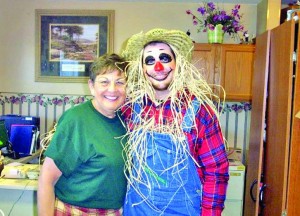 by Kelly Gates
At Royal Oak Farm in Harvard, IL, it takes a small fleet of equipment to manage the 16,000 apple trees plus the raspberries, peaches, sweet corn, pumpkins, gourds and other produce grown there.

According to the farm’s manager Paul Norton, pruning, mowing and maintaining the 120 acre operation is now a year round, full time job. It took a number of years for it to reach that point though, he said.
“When my grandparents purchased the land back in 1991, they wanted to rent it out for traditional farming purposes, but when a gentleman from California leased a parcel and put apple trees on it, my grandpa decided to help out a little,” Norton said. “He really liked growing apples, so he planted 5,000 trees of his own, then another 5,000 two years later.”
In 1996, the new apple orchard owner decided to open his business to PYO customers. The following year, he did just that, adding a retail shop at the Harvard property and marketing the place to locals.
Paul’s parents eventually joined the family business. His father Dennis Norton currently handles the orchard scouting and pest management along with the website development and social media while Paul’s mother, Renee Norton, oversees the on-site bakery and farm market.
“There are four generations of family members that run the farm and we all have different areas of responsibility,” said Norton. “My sister Sarah Bell and I are the third generation. Sarah handles special events like corporate parties, weddings and school tours and I take care of most of the general farm operations and crops. My brother-in-law, Justin Bell, handles all of our human resources and finance management.”
The fourth generation of Nortons are still young yet. But they lend a hand during the peak season and the family hopes that some of them will take the helm at Royal Oak Farm in the distant future.
In the meantime, the adults plan to continue maintaining the facilities, crops and other components that make the business successful. During the winter months, that means pruning, pruning and more pruning.
“Once the trees go dormant, usually in the middle of December, we start pruning,” explained Norton. “It takes two to three guys from December to early March to finish cutting all 16,000 apple trees.”
In the spring, all of the pruned branches and waste must be cleared from the orchard to make room for sprayers and mowing equipment. A flail chopper is used to process smaller twigs and branches while a Vermeer chipper chews up larger pieces, making chippings that are bagged and sold by Royal Oak Farm later in the year.
When the debris is finally cleared from the area, workers are able to start spraying.
“In March, we apply some dormant products, like a mineral oil that helps control early season pests and a copper-based fungicide that protects from certain bacterial diseases,” noted Norton. “We use a 500 gallon Durand-Wayland aerial blast sprayer that has a three ft. fan on the back to circulate air through the spraying unit and access the trees much better. It takes about eight hours to spray the entire orchard.”
From late spring through the fall, the staff at Royal Oak Farm spends much of its time mowing and maintaining the landscape. Every week and a half to two weeks, the orchards are mowed using an 8 ft. rotary mower.
Two zero-turn mowers are also utilized allowing the company to maintain the roadsides and perimeters throughout the property. With so much area to cover, workers mow around five or six days each week, said Norton.
When the pruning, spraying, mowing and weeding is done, there are still general chores to tend to around the orchard, produce fields and farm facilities.
The array of irrigation equipment scattered around the property requires adjusting throughout the year. And there are all sorts of jobs to manage at the retail store, bakery, petting zoo, rides and attractions, and pavilion.
“Our bakery sells pies, caramel apples, fudge, breads, donuts and other goods. We also sell jams, jellies, gift items and a wide assortment of home décor,” said Norton. “Kids love to come out and ride our carousel and train and interact with the animals at our petting zoo. We also have around 10,000 students who come here on field trips during a two month period in the fall, so there’s always something going on.”
A recently built pavilion acts as a classroom for students on rainy days. It also doubles as a space for weddings, corporate events, family reunions and other group activities.
There is even a full service restaurant on-site and at times, the farm hosts live concerts for its customers.
According to Norton, keeping things new and interesting is the key to running a popular agritourism business like Royal Oak Farm.
“We’ve expanded over the years by adding 6,000 more trees, constantly changing out our product mix and increasing the types of apple varieties we offer from around 20 to nearly 30. Some are varieties that were added so we always have some type of apple ready for harvest at all times,” he said. “We’ve also added more activities and facilities to meet our customers’ needs for retail spaces, shelter for events and more interactive rides and sights for the children.”
Next year, the family hopes to open an apple tree maze, creating a winding trail through the orchard for visitors to enjoy. And, as time passes, the family will add other activities that keep visitors coming back year after year to experience what’s new and exciting at Royal Oak Farm.