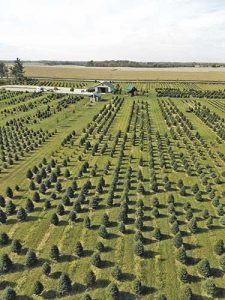 by Laura Rodley
Lance Sambol likes people, creating a joyful experience and working outside. He also likes flexibility. He sells Christmas trees at Sambol’s Tree Farm in Fortville, IN. Last year was his first season selling Christmas trees.
It’s a choose and cut your own tree farm. After a family has chosen, cut, loaded and is driving away with their tree “you know you’re a part of their Christmas. It’s a good feeling, seeing your tree on top of their car [that] you’ve worked on for eight years, knowing it is going to be part of their Christmas,” said Sambol. There are also some pre-cut trees for people who don’t have time to cut their own tree.
He was in the golf business before he bought the 18-acre cornfield in late 2008. He has worked to turn it into a tree farm planted with 13 acres of trees. He and his wife Susan planted their first batch of 3,000 trees in the fall of 2009.
His 36-acre Northeast Golf and Practice Center, which was a driving range and nine-hole par three golf course in McCordsville, IN, had him busy every day. His favorite chore was being outside taking care of the golf course and putting green. After working 13 hours a day for nine years, the recession hit. He sold it in 2007 and looked to reinvest in land. “I went to see the farm and saw the beauty of the place. I’ve been working on it ever since.”
Now his schedule is a bit more flexible — weeding, mowing, working on trees and shearing each one into shape. “There’s always something that needs doing if you want to stay in good shape.”
He applies a nitrogen-based fertilizer with a 21-0-0 ratio in the spring and an all-round fertilizer in the fall on trees that are two to three years old. Applications to trees outside that age group becomes cost prohibitive. He does a six to eight-inch basal pruning around the trees so people can see what they are doing when they are cutting underneath the tree and to allow for better airflow. Plus, he can get under them for weed control. “Crawling under trees, I could work 12 hours a day and never get caught up,” but the amount of time spent is completely up to him. He cherishes the flexibility of working a three-hour day if he chooses or being able to take a four-day camping trip, ensuring enough time is left to spend with his eight-year-old daughter and his parents.
Susan, his wife, has a full-time job but does all the wreaths and is in charge of retail as well.
What is unique about selling Christmas trees as a crop is that all the sales begin the day after Thanksgiving, when 85 percent of tree sales occur so buyers can enjoy their tree as long as they can. With people working during the week and children in school, customers come out on weekends for their family tree cutting experience. At that time, he has a crew of 10 to have everything ready.
His motto is “Real. Fresh. Trees.” and he delivers. He tells customers to get their tree home and in water right away and keep their tree well hydrated. If customers leave it outside for a few days, Sambol advises his customers to recut an eighth to a quarter inch off the trunk to maintain freshness.
He sells Canaan Fir as they retain their needles well. He also sells Norway Spruce, Black Hills Spruce and Concolor Fir. The Concolor he considers the most aromatic of all the Christmas trees as it has a citrusy smell. It is a bit slower in growing. “In probably six, seven years, you’re going to get a seven to eight-foot tree, if you are lucky.” The fir tree is where the Christmas tree market is going, he noted.
He currently has 13,000 trees at various stages of growth, from one to 10 feet. For every tree he sells, he’ll plant three more.
Last year he sold 375 trees. This year he plans to sell 650 or more. “We had a good first year and we have a lot more trees available. I want to sell 1,000 a year,” he said, with an optimum goal of selling 1,300 to 1,400. He does have competition as other farms around him offer Christmas trees.
He approached the nearby town of Fisher to become a sponsor of Fisher’s tree recycling drop off program, where people drop off their trees to be run through a chipper and laid as mulch in the town’s parks. Last year about 3,000 trees were dropped off. “When they drop off their tree, they’ll see the name of Sambol’s Tree Farm as a sponsor. I want them to know where I am and to see the program continue,” said Sambol.
Dropping off the trees rather than throwing them away or burning them is part of this generation’s expanding green awareness. “More and more people are going for real trees — being green, the whole recycling trend. Fake trees…come over on a boat, have a huge carbon footprint, probably [ending up in] a landfill for one hundred years,” he said.