Save room for kale 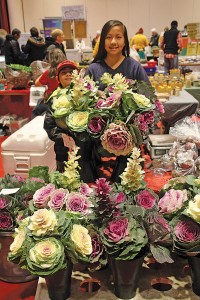 by Sally Colby
When fall arrives, the requisite tubs of chrysanthemums and flats of pansies join pumpkins and other fall favorites that replace summer annuals and perennials. However, there’s another fall feature that shouldn’t be overlooked – ornamental kale – also known as ornamental cabbage, flowering cabbage or flowering kale. The term ‘flower’ is somewhat of a misnomer because this plant’s main feature is its variegated, colorful leaves.
Ornamental kale is genetically identical to both cabbage as well as the increasingly popular kale that’s become a staple of farmers markets and CSAs. The main difference between edible and ornamental kale is the many leaf patterns, colors and growth habit of the latter. Most ornamental kale doesn’t form a tight head like cabbage does. The leaves are deeply ruffled or serrated, and have varied growth patterns from ‘open’ heads to tall stalks with leaves that look almost like limbs.
Although all varieties of ornamental kale are edible, most are somewhat bitter. Some, however, are fairly palatable and can be prepared just like their less colorful cousins. Garden centers that offer edible varieties should mark the edible cultivars clearly so that customers are aware of that trait.
Garden centers that wish to feature ornamental kale in late summer/fall should plan ahead for offering it for sale as well as in the outdoor landscape surrounding the garden center. In many growing regions, ornamental kale survives winter and is still colorful in spring. However, it requires water to remain viable, and most home gardeners tend to neglect plants after a killing frost.
As is the case with other showy plants, ornamental kale planted in the garden center landscape will attract attention and invite questions about its use in the home garden. A showy exhibition of carefully selected flowering kale among pansies and mums will lead customers to consider this plant for their own landscape.
Growing kale from seed for late summer and fall sales takes some planning ahead. Growers should allow a total of 11 weeks from seed to finished product. Since the distinctive coloration of ornamental kale requires nighttime temperatures below 60 degrees F, seeds should be planted about six to 10 weeks prior to the first frost. Ornamental kale seeds do well in soilless substrate or in soil-based medium that includes sand to help plants remain stable as they gain height.
Seeds require light for germination and consistent, cool conditions for optimum growth. Seeds can be sown into germination trays, plug flats or right into 806 flats. Germination takes four to six days in temperatures between 65 and 70 degrees. Once seedlings have emerged, a temperature between 60 to 65 degrees will encourage the best growth.
Seedlings should be transplanted into small pots (6” to 8”) as soon as possible to prevent plants from becoming root bound, which will restrict potential growth to maturity. Adequate spacing between plants is essential to prevent disease and to achieve balanced, symmetrical growth. Transplants should be fertilized with a complete fertilizer (20-10-20) or a slow-release product.
As the plant matures and nighttime temperatures remain consistently below 50 degrees, the centers of certain varieties will begin to color. Within several more weeks, fuller, more intense color develops. If temperatures remain higher than 50 degrees, stem elongation can be delayed with a growth-regulating product. Growth regulators should not be applied to any varieties that will be offered as edible.
Ornamental kale is subject to drought stress, so plan for adequate moisture in the form of automated irrigation such as system used for mums. Since the young plants will be growing through the summer, irrigation will likely be necessary to provide consistent moisture. Yellowing and dropping of lower leaves indicate drought stress, although low nitrogen causes similar symptoms.
Like other brassicas, ornamental kale is subject to common insects including flea beetle, leaf roller, aphids and cabbage looper. Watch for these pests as plants are prepared for sale, and offer control strategies to customers so that their experience with ornamental kale is positive.
Plant breeders have developed some unusual cultivars of ornamental kale, and there’s an ornamental kale to suit every taste and garden style. Home gardeners who take good care of this plant through late fall and winter can count on having an extra bit of color for an extended period of time in an otherwise harsh landscape.