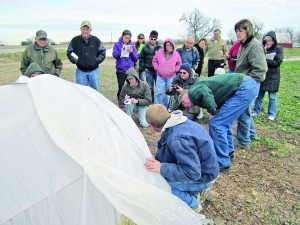 by Bill and Mary Weaver
Chad Wallace, of Oaktree Organics, west of Springfield, IL, was one of the pioneers of season extension in the state. Wallace grows a surprising array of vegetables for winter harvest, including carrots, two kinds of very hardy kale, Bibb lettuce, spinach, “Bull’s Blood” beet greens, mesclun mix, cilantro, arugula, beets and turnips. How he times plantings and protects the crops in the field in decidedly frigid Illinois winters, as well as how he markets them, are of considerable interest to other growers, as his presentation at the Illinois Specialty Crop and Season Extension Conference showed.
“Season extension is another way this farm makes a living, “he said at the outset of his talk. “Season extension pays.”
His carrots for winter storage are planted mid-August at the latest. “If it’s dry, we irrigate them up,” he added. “We want to have an almost fully developed root system by the time we mulch them.
“We tried the Imperial variety. They’re supposed to have a long storage life, but they got woody.
Since then, we’ve grown Nantes. With the cold weather, they get very sweet, as cold temperatures turn starches in the carrots into sugars. The kids love these ‘candy carrots.’ From our on-line market, we get comments like, ‘Our kids like the carrots better than the berries!’”
Oaktree Organics harvests the carrots out of the ground (from under thick mulch and a heavy [6 mil] plastic, very low tunnel,) up to February. “We’re usually out of carrots by then, but we’ve learned that if any are left in the field, they can lose their sugary sweetness in about 10 days as the hours of sunlight begin to lengthen in mid-to late February. Then the carrots will start putting out greens again as they revert to the growth stage. So we try to have them out of the ground by the first week in February.”
Two kinds of kale have also performed very well for Wallace for winter harvest. Siberian, or Red Russian kale, keeps growing, even in the lowest light of winter, from mid-December to mid-February, when other greens are in a holding pattern, waiting for more light. “The Red Russian kale just about grows in the dark,” Wallace joked. “In mid to late February, the light changes quickly, and we get quite a few more daylight minutes.
“I learned about Red Russian kale in a book by Elliot Coleman, who grows this variety in the winter in Maine. One key to successful winter growing is seeking out other people who are doing it, and finding out what works for them.”
“Dyno kale” is what Wallace calls Blue Kale, another winter staple. “Kale can actually freeze, and as long as the plastic in the tunnel isn’t touching the leaves, the plants will be fine. Two years ago, our blue kale resprouted in the spring, right in the field. The leaves were a little smaller, but by the end of the season, the plants were head high.”
Bull’s Blood beets produce fabulous beet greens for repeated winter harvests. “We keep picking the leaves through the winter. A lot of growers don’t realize you can do this. If the leaves get smaller, we put them in a fancy lettuce mix.”
Wallace is blessed with several large root cellars. The first week in February, when he harvests the last of the carrots, he cuts off the tops and puts them in the root cellar. Beets are also grown in the field in very low tunnels, with the plastic only about 10 inches above the top of the mulch. Some beets also end up topped, in the root cellar in boxes. Turnips are sometimes covered with mulch and tunnels, and sometimes they just get pulled and topped, and go right in the root cellar when temperatures get too cold to grow them unprotected.
This year, for the first, Oaktree Organics will be building some hoop houses, to replace some of their 4-foot low tunnels. “I got tired of working bent over and getting my back wet,” commented Wallace. “But low tunnels are still a good way to grow. The big issue is the wind. We spend a lot of time securing our low tunnels.”
To do season extension, you have to plan ahead and follow your plan. “It may still be summer, but you have to plant this crop or that crop now, or it won’t be ready when cold weather sets in. Two hours south of here, growers have a lot more flexibility in how they do things.”
Rotations are also important, and become more complex when you’re cropping in winter too. And before you put the plastic on the low tunnels, be sure everything is mulched well, and the ground is moist. “Last year, we did some drip irrigation during the winter. Just be sure to keep the leaves dry if you need to irrigate.”
The first year Wallace decided to winter garden, his wife took one look at his improvised, jerry-rigged structures, which were mostly made out of odds and ends from the barns, and said, “If you are able to grow all this stuff, what are we going to do with it?”
“So we took email addresses from our best market customers,” Wallace continued. “We had 45 people the first year, and now, about five years later, we’re up to 700 people in our online market.
“Winter growing ties you to the farm, and growers should know that,” added Wallace “There’s something to do every day, such as taking off row covers inside your plastic-covered structure. Doing season extension is similar to keeping livestock. Both have to be tended to on a daily basis.” If a grower is already too busy in the winter with, say, a lot of machine repairs that must be completed, it may not be practical for him to consider season extension because it is so time-consuming, day in and day out.