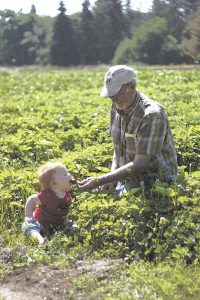 by Sally Colby
When Walt Johnson’s grandparents started farming in the Willamette Valley in 1915, consumers were quite different from those who seek fresh fruits and vegetables today.
“For the first 50 years, we sold produce at a farmers market in downtown Eugene,” said Walt. “That closed in 1958, but my grandmother had already developed a loyal clientele who had shopped at that downtown market. They followed her out here to the farm, and it grew from there. For the next 20 years, she ran it here, then I bought it.”
Walt describes the farm’s first retail market as a small shack with a gravel floor, and recalls that his grandmother did all of the calculations for a purchase on the side of a grocery bag. “I did the same thing for a long time – wrote on the side of the bag,” he said. “I — we didn’t start using cash registers until about 20 years ago.”
This year will mark Johnson Vegetable Farm’s 101st season, and Walt has seen significant changes in consumer preferences over the years. “We’ve adapted to growing varieties that aren’t available in grocery stores.” In response to customers’ requests for limited chemical inputs, Walt has worked toward a no-spray program.
Many vegetables, including tomatoes, peppers, eggplant, onions, watermelon and cantaloupe, are started inside and transplanted later in the season. Direct seeded crops include carrots, dill, beets, peas and spinach. Five successive plantings of sweet corn are already in the ground, with subsequent plantings going in weekly to keep customers supplied throughout the season. “We’ll have a total of eight to 10 plantings of five varieties across the season,” said Walt. “We provide a great deal of variety that probably exceeds what anyone else in the area has. Summer price buyers don’t care what kind it is as long as it’s cheap; other people are more sophisticated and are going after the finest eating quality. That’s what I hope to achieve.”
Walt noted that while many area growers stick with popular sweet corn cultivars, he prefers varieties with above average qualities. “There are quite a few nice ones that have come out,” he said. “We trial every year, trying to hone things down and improve either the eating quality or the keeping quality for the customer.”
Although the vegetables provide steady seasonal income, Johnson Farms’ eight acres of berries provide year-round income. Walt explains that his grandparents were among the first to grow raspberries in the Willamette Valley, and that the farm has been producing freezer berries for 20 years. Walt is currently working on expanding that aspect of the operation. “About half of the berries are sold during the winter,” he said. “We’re trying to accumulate more customer base for that, hoping that about two-thirds of our sales will be for frozen berries.”
Many customers no longer have large freezers and aren’t interested in freezing berries themselves, but appreciate fresh berries throughout the year. Walt explained, “We pick and pack at peak quality and flavor. We’re getting a lot of return customers who come in every week. It takes all the effort out of it for the customer and they don’t have to fill their freezer with fruit all at once – they can pick up berries whenever they want.”
Walt says in the early berry days, people had larger families and many of those families canned fruits and vegetables.
Offering frozen berries also helps maximize the profit from a crop. For example, Marionberries yield heavily, but only for about 2.5 weeks. “We might have 1,000 pounds a day coming out of the field, but there’s no way we can sell that many fresh,” said Walt. “We also sell a lot of Tayberries, which are a cross between a Marionberry and a raspberry, named for the Tay River area in Scotland where it was first propagated. It has the best qualities of the Marionberry and combines that with a good raspberry.”
Other frozen fruits from Johnson Farms include jumbo blackberries, blueberries, raspberries, wild blackberries, boysenberries, strawberries and rhubarb. Some fruits and vegetables are available for u-pick throughout the growing season.
Berries are grown on a two-wire trellis system, and pruned and trained according to each species. Damp weather conditions in most seasons result in at least one fungicide treatment. Invasive weeds can be a problem, so Walt is constantly working to keep them at bay. He’s been experimenting with landscape cloth in a row of Marionberries to keep weeds and grass away from the plant base.
Despite the ongoing work of spring and summer, Walt looks forward to the farm’s fall activities. “October is the fun month,” he said. “It’s a good way to finish up the season. We grow about 15 varieties of pumpkins, including whites, pinks, warts, stripes, jumbos and miniatures.” An indoor hay maze makes use of greenhouse space while providing fall fun for visitors in any weather.
One of the most popular draws in fall is Walt’s Wild Wagon Ride, which Walt describes as a ‘brisk ride’ to the pumpkin patch. “People on the wagon get to toss as many pumpkins as they want at about 50 scarecrows along the route. It’s an exciting ride.” After the ride, guests can take aim with a bungee launcher, another popular draw.
Walt’s daughter Amanda handles public relations and social media for the farm, and has some new ideas including an expansive flower garden. She is hoping to schedule a festival in September and invite people to the farm to take photographs. Amanda is also working on developing recipes that include the vegetables grown on the farm, especially those that are unfamiliar or new.
Visit Johnson Farms online at www.johnsonfarmseugene.com .