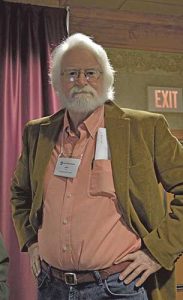 by Steve Wagner
John Friel, author of 13 books, has been part of the horticultural industry for over 35 years and is the marketing manager for Emerald Coast Growers. “We grow in two very different climates and we have two very different product mixes. In our Pennsylvania location, we grow stuff that can’t handle Florida’s hot humid summers. Cool season grasses and certain perennials do much better in Pennsylvania,” Friel elaborated. There is very little crop overlap, but one exception is succulents. Specifically semper vivo, slang for sempervivum, Latin for live forever. Nicknamed Hens and Chicks, they are succulent perennials.
Succulents can handle a wide range of conditions, situations, altitudes, environments and just about everything else. In the past decade or so they have gained popularity and can be planted in every size container from that of a refrigerator magnet to green roofs which can be many thousands of square feet.
“There are many beneficial factors in having a green roof,” says Friel. “They cool buildings. They make a roof last longer if properly designed, reduce the urban heat island effect — but their main task is to capture rainfall. Green roofs were invented in Germany to keep rainfall from overwhelming mingled sewage systems, which is why governments all over the world are willing to subsidize them.”
Contrary to public opinion, there is no such thing as the succulent family. Succulents encompass a suite of characteristics that are shared by plants in many different genera and numerous families. “It is a survival tactic that enables a plant to absorb a lot of water quickly when it is available, and then hang onto it through long periods when water is not available,” Friel explains. Aloe is a genus containing over 500 species of flowering succulent plants. Friel showed it growing in the Grand Canyon in Arizona. “That’s an extreme example of the kind of climate where these plants evolved,” he says. “Aloe is not native to North America but it is pretty much naturalized all over the world.” Arizona does get monsoons, so a couple of times a year this aloe will be inundated and the desert will turn green. That, in turn, is followed by convection oven heat for weeks and months at a time. What’s more, they can handle it. Aloe thrives in a very tough environment.
The offshore unrooted cutting farms have changed pretty much everything about how plants are grown in this country and not just succulents but also herbs, annuals, perennials and even tropicals, according to Friel. Citing plants like aloe, crassula, echeveria and graptopetalum, Friel asked, “Why are they just sold as succulents? I’m a stickler for nomenclature having been chair of the nomenclature committee for the Perennial Plant Association. I write our ornamental grass and perennial catalog and I happen to think that Latin names matter. I mean would you buy a fruit tree where the sign just said fruit? Wouldn’t you want to know if it was mangoes or mulberries?” Why not specifics with succulents, as well?
Friel came to Shady Maple in Lancaster County Pennsylvania to discuss his hardiest succulents. “Our main genus is sedum. This is the one that makes your green roofs work. Sedums roughly fall into two categories — the upright one, the sedum Autumn Joy types, and the low creepers, the ground cover types. There are telephium, herbstfreude and sedum brilliant, if you’re looking for those related to Autumn Joy.” Another trendy thing today is growing for pollinators. Bees love sedum flowers, especially the big ones.
Sedum Coral Reef is a variety that Friel feels is drastically under-used and under-appreciated. He describes it as being “very vigorous, spreads well but not invasively, and it gives you a nice range of colors through the season.” It is an unusual variety for a couple of reasons. For one thing, it is native specifically to northeastern North America. It is also quite hardy to zone 3 and, unlike most sedums, it prefers shade. Friel maintains that his Coral Reef has been thriving for three or four years with virtually no attention from him. “A green roof is sort of ground cover in the sky,” he philosophized. “Another way to make a big green roof is a sedum sod that can be rolled out onto a roof by the thousands of square feet,” he says.