Should growers be concerned about the Asian giant hornet?

If you were to pay attention solely to the sensationalized news reports, you might think America was about to be overrun by so-called “murder hornets.” In reality, Asian giant hornets (AGHs) are not necessarily a threat – yet.

To explain the situation, back in February, Chris Looney, a taxonomist and entomologist with the Washington State Department of Agriculture (WSDA), put together a presentation about the larger-than-life insect. Vespa mandarinia, discovered in 1852, is native to Asia, with its highest concentrations in Japan and Korea. At more than two inches in length, they prey on any insect they can, but have a predilection for honeybees. AGHs can fly many miles a day at speeds of up to 20 mph. They tend to nest underground in hollows formed by rotting tree roots, in hollow trunks and in rodent burrows.

Why do some people call them “murder hornets”? It’s not because they aim to kill humans; it’s because of the way they can destroy honeybee hives. According to Looney, honeybee attacks occur in three stages. In the hunting phase, individual hornets will catch a bee and return it to their nest. In the slaughter phase, one beehive is the focus of an attack. The AGHs will kill all the worker bees and dump their bodies. As few as 20 hornets can functionally destroy a beehive in under six hours. In the occupation phase, the hornets take over the hive and select bee larvae to return to their nest as food.

According to Washington State University Extension, the hornet tends to be a predator of honeybees late in the season. The AGH also preys on other hornets and social wasps, but its impact on honeybee colonies is the biggest concern. The WSDA has been distributing sap-baited sticky boards this spring with the goal of attracting inseminated queens coming out of hibernation. Queens usually come out of hibernation in April and begin seeking suitable sites for developing new nests. During this time, queens have high carbohydrate diets – and oak sap is one of their preferred sources. Sticky traps are an excellent way to capture AGH queens and prevent the establishment of new nests. You can learn how to build a trap at wasba.org/news/build-your-own-asian-giant-hornet-traps.

There were only four sightings of AGHs in the Pacific Northwest in 2019, Looney said. We’re still unsure of how they arrived here. The positive identifications were in Nanaimo, BC, and Blaine, WA – and the two found in the U.S. were dead upon discovery.

Ten of Washington’s most important crops are dependent on bees for pollination, and $3 billion of Washington’s economy comes from tree fruit and berries. On a larger scale, honeybees allow U.S. farmers to produce more than 90 crops. The potential spread of AGHs could spell serious trouble – but right now that potential is merely hypothetical.

Kevin Oldenburg, president of the Washington State Beekeepers Association, noted that a lot of hype about a lot of things in beekeeping are not based in fact. “Honeybees are not in peril – we have more hives today than we did in 1985,” he said. Their biggest issue has been illnesses spread by varroa mites, which do lead to losses, but bees start fresh every spring.

Oldenburg said people need to think of honeybees as agricultural animals, just like cows, pigs and chickens – they just provide pollination services instead of milk or meat. And just like other farm animals, they do need to be cared for and protected when threatened.

“If they [AGHs] become established, it could be really bad for beekeepers in our geo-climactic region,” Oldenburg said. “We’re concerned about predicting how far they can travel. But we’re also pretty confident in what the state Department of Agriculture is doing to find and eradicate them. It’s a search and destroy mission – but maybe the queens didn’t even survive this past winter.”

Trapping and locating AGHs, if they are around, will be easier in July when their workers are traveling, Oldenburg said. Being cautious is the goal, and he believes the program to trap and eradicate them could last five to 10 years. “The cost of not doing anything is a lot worse,” he stated.

The WSDA will try to locate nests and destroy them (at night). They are insistent that you do not try to do remove a nest yourself or hire a pest control company to do so. If you see a suspect nest or beehive being attacked, stay at least 10 feet away. Additionally, if you have seen an AGH or evidence of a hive attack, report it using the Hornet Watch Report Form (at tinyurl.com/ycwh7f94), by emailing PestProgram@agr.wa.gov or by calling 1.800.443.6684. 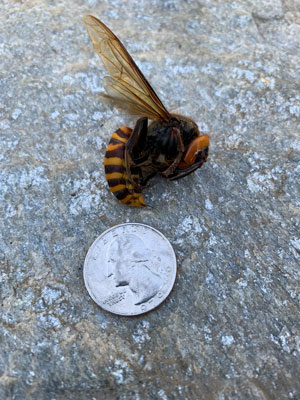 On May 27, a resident near Custer, WA, found the dead specimen while walking on a roadway.
Photo courtesy of Joel Nielsen

The Washington State Department of Agriculture (WSDA) reported the first confirmed sighting of an Asian giant hornet in Washington this year.

On May 27, a resident near Custer, WA, found the dead specimen while walking on a roadway. The resident submitted a photo and report using WSDA’s online Hornet Watch Report Form. On May 28, WSDA entomologists concluded that the photo appeared to show an AGH. The specimen was collected and submitted for laboratory testing the same day. State and federal labs confirmed that the specimen was an AGH on May 29.

The hornet was detected near the location of a suspected AGH bee kill in 2019. WSDA had already planned trapping in the area and will maintain that plan to try to find any colony that may be there.

“The USDA’s Animal and Plant Health Inspection Service (APHIS) has developed response guidelines that include several options for eradicating the Asian giant hornet should additional hornets be detected in Washington State. At this time, there is no evidence that Asian giant hornets are established in Washington State or anywhere else in the United States,” according to Osama El-Lissy, deputy administrator for USDA-APHIS’ Plant Protection and Quarantine program.

The first find of the year in the U.S. comes just days after the British Columbian government confirmed their first detection of the year in Canada near Langley, BC, initially reported to authorities on May 15.

WSDA plans to locate these hornets through trapping and public reporting of AGH sightings. Members of the Mt. Baker Beekeeper Association have also partnered with WSDA to place experimental traps.

WSDA has also provided trapping instructions for citizen scientists who would like to build and place traps starting in July for AGHs on their property and report the results to WSDA. Commercially available hornet and wasp traps will not catch AGHs as the holes are too small for the hornets to enter the traps.

Although not typically aggressive toward humans, AGHs do pose a human health threat. Their sting is more dangerous than that of local bees and wasps and can cause severe pain, swelling, necrosis, and, in rare cases, even death. Anyone who is allergic to bee or wasp stings should not approach or attempt to trap for AGHs.

Visit agr.wa.gov/hornets to learn more about AGHs and the state’s trapping and eradication project.

As the WSDA reported last week, Washington had its first confirmed report of an AGH for 2020 in the Custer area.

Today, the USDA confirmed that the specimen was a queen and was mated. If she started a nest, it will not survive without her. This is effectively one colony down for 2020.