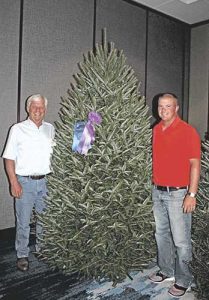 LITTLETON, CO — A Balsam Fir Christmas Tree grown by David and Jim Chapman of Silent Night Evergreens, located in Endeavor, WI was awarded the 2017 Grand Champion at the National Christmas Tree Association’s (NCTA) 2017 National Christmas Tree Contest. As growers of the Grand Champion tree, the Chapman’s have earned the honor of presenting the official 2017 White House Christmas Tree this season. Since 1966, NCTA members have presented the official Christmas Tree for display in the White House Blue Room.
Ed Hedlund of Hedlund Christmas Trees, in Elma, WA was named Reserve Champion of the contest. Traditionally, the Reserve Champion grower has provided a Christmas Tree for the residence of the Vice President.
Because the contest is held every other year, both the 2017 and 2018 champions are awarded. The 2018 Grand Champion winner is Larry Smith of Mountain Top Fraser Fir located in Newland, NC and the 2018 Reserve Champion is Russell and Beau Estes of Peak Farms, located in Jefferson, NC. These winners will have the opportunity to present the 2018 White House and Vice President’s residence trees.
The contest was held in Green Bay, WI in conjunction with the Wisconsin Christmas Tree Producers Association meeting and attracted 21 contestants from across the country with each competing grower having previously won a state contest to qualify. Trees can fall into five different species categories and are first scored by a panel of judges. Judges are experienced growers and former contest winners representing different geographic regions of the United States. The top two winners in the species categories are then subjected to a popular vote by convention attendees by secret ballot to determine the Grand and Reserve Champions.
The Chapman’s are in familiar territory, having been awarded Grand Champion status in 1998 and 2003 and presenting trees to President Clinton and First Lady Hillary Rodham Clinton and President Bush and First Lady Laura Bush, respectively. They have also won numerous Christmas tree contests in their home state of Wisconsin.
White House staff members typically travel to the Grand Champion’s farm in the fall to select the tree that will grace the Blue Room. That tree will need to be approximately 18 1⁄2 feet tall, much larger than the 6- to 8-foot trees entered in the contest. The chosen tree is typically harvested and presented to the White House shortly after Thanksgiving.
Winners of the National Wreath Contest, also held at the Green Bay event were:

About NCTA
The NCTA is the national trade association representing the farm-grown Christmas tree industry. NCTA represents 29 state and regional associations and thousands of affiliated farms that grow and sell Christmas trees and businesses that provide related supplies and services. To learn more about the NCTA, visit www.realchristmastrees.org, or call 800-975-5920.