Silveyville slides into the seasons 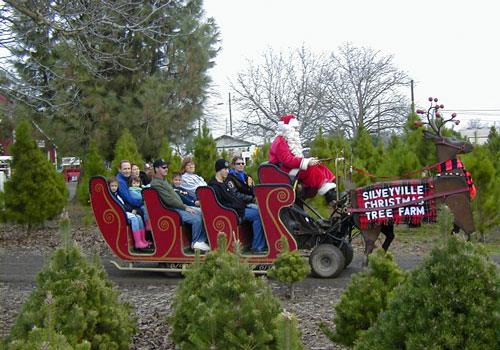 For over 40 years, Silveyville Christmas Tree and Pumpkin Farm has been serving the holiday needs of its community.

Owned and operated by wife and husband Jeri and Ted Seifert, Silveyville is the go-to place for anyone in the Dixon, CA, area looking for that perfect Halloween pumpkin or incomparable Christmas conifer.

Ted’s family has been in business in Dixon since the 1920s, and Jeri’s parents long ago established themselves as fixtures in the local agricultural community.

“We began Silveyville in 1979,” Ted said. “We’ve had tremendous success with selling our Christmas trees, and about 15 years ago, we expanded our business and also started selling pumpkins in the fall.”

Silveyville operates on approximately 25 acres; 12 acres of that is dedicated to Christmas trees and the pumpkin patch takes up four acres. An additional nine acres are set aside for parking (enough for over 300 cars), in order to keep up with the massive influx of patrons during Silveyville’s operating seasons. The pumpkin season runs throughout October, and the Christmas tree season lasts from Thanksgiving through Christmas Eve. In order to keep Silveyville running smoothly, the Seiferts maintain two full-time employees and over 40 part-time employees during their holiday season.

Of the Christmas trees, Ted explained, “We offer both pre-cut trees and cut-your-own trees. Our main offering is the Monterey Pine. It’s very popular. We also get a great response from our customers to our Incense Cedar and Coastal Redwood trees.”

Ted said that because they’ve been in Dixon for so long, and also because of the great word-of-mouth referrals they get from their customers, Silveyville doesn’t need a lot of marketing dedicated to their Christmas trees. “We do, however, market the pumpkins a lot more, especially with my wife’s tours,” he explained. Jeri’s educational tours are an important part of Silveyville’s expanse into agritourism. She guides guests, usually kindergarteners and first and second graders, on walking tours of the property. On the tours she teaches about insects, birds and the overall ecosystem the children see before them.

Additional parts of Silveyville’s agritourism offerings include the animals on display – they have goats, chickens, horses, rabbits and a duck pond. There are also riding opportunities on the property, an ATV pulling six to eight carts of guests and a “duck wagon,” a tractor pulling a series of flatbed carts. Parents can also accompany their children to Silveyville’s Pumpkin Village. Geared toward children aged seven and younger, the Pumpkin Village features a corn tower, slides, a play garden, two corn baths and a pretend farmers market.

Also popular are the mechanical reindeer. “Gerry, my late father-in-law, never made it past the eighth grade, but he was an absolute genius – a wizard with his hands,” Ted said. “He could take anything apart, learn how it worked and put it back together again – and it would work better than ever!” Gerry came across a mechanical reindeer in the 1980s. He took it apart, reverse engineered it and put it back together, converting it from a gas-powered mechanism to a battery-powered one in the process. He and daughter Jeri later built a second one from scratch. “It works even better than the first one!” boasted Ted. Guests are now given the chance to ride on a sleigh, driven by Santa Claus himself, and “pulled” by these mechanical reindeer, all while enjoying popcorn and cider.

Looking ahead, Ted and Jeri are working to establish “The Timbers at Silveyville.” The Timbers is an event venue hosted at Silveyville. According to Ted, “It’ll give people an opportunity to host a wedding or other event on our property. As a venue, it’s both rustic and elegant. It’ll be available nine months of the year.”

Another important development at the farm is the coming introduction of the Silveyville Shop. In addition to custom wreaths and garlands, the shop will feature personalized Christmas ornaments, locally handmade gifts and other Silveyville specialties. Online ordering will be available to customers soon.