Simple Gifts Farm and its legacy of good luck 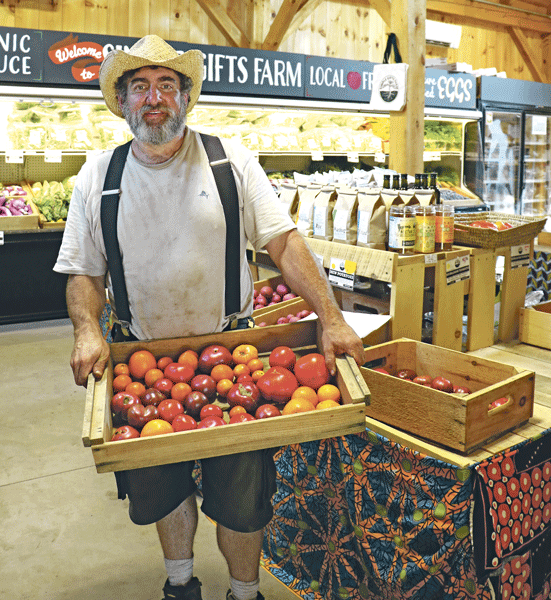 The stars are aligned over Jeremy Barker Plotkin. In 2005, when he was searching for a piece of property to farm in Amherst, MA, he happened to drive by a property on North Pleasant Street when a not-yet-current neighbor was pounding in a post with a sign that read “Save this farm.”

The 32-acre farm was being sold. “There was an offer of $1.2 million to a developer on the table. There’s no way we could have afforded that. A group of neighbors came together and bought it and looked for a farmer to lease it,” said Plotkin. The group, an ever-shifting number as members come and go, became the nonprofit North Amherst Community Farm, which owns this property.

Plotkin had jumped the gun, as they weren’t ready to take proposal applications. He had to wait until November. When he and his business partner David Tepfer did apply, they were chosen, and Simple Gifts Farm is the property’s long-term leaseholder.

While everything is a joint effort, Tepfer is their livestock and construction guru. As farm stewards, they own any improvements that are done to the property.

The farm is named Simple Gifts since that was the name of Plotkin’s former farm operation in nearby Belchertown that was another leased property, under the New England Small Farm Institute. Simple Gifts Farm is under Chapter 61, put under agricultural preservation restrictions (APR), which is part of how the land trust was able to buy the property, Plotkin noted.

Due to another stroke of luck, a property came up for sale on the edge of the farm that Plotkin bought. There he built a house with his wife Audrey Barker Plotkin, who works off the farm. His luck extended to other people too. Tepfer lives in a house that came up for sale on another edge of the farm. Their workers live in the farmhouse that came with the property. While the farm owns the farmhouse, it is preserved for agricultural housing only, and they are not allowed to sell it.

The farmland was semi-abandoned, though a rye crop had been planted. It had not been cropped for a number of years prior to the sale.

Many plants are started in their 10 greenhouses. The vegetables are certified organic. Red, purple and yellow potatoes were harvested from the fields and brought into their 24-by-36-foot timber frame farm store on the last day of July, one of the hottest days of the year. They sell eggs, cucumbers, summer squash, zucchini, carrots, greens, chard, kale and cut flowers, with flowers and vegetables available for CSA members to pick their own. They still have some raspberries, with ever-bearing varieties set for autumn ripening. They also raise livestock.

They originally sold their produce and meat at the Amherst Farmers Market, but since opening their farm store in 2017, they no longer need to attend. A CISA member, they grow enough for 200 CSA members. There are six to 10 employees working on the farm at any given time, with someone at the farm store all the time. 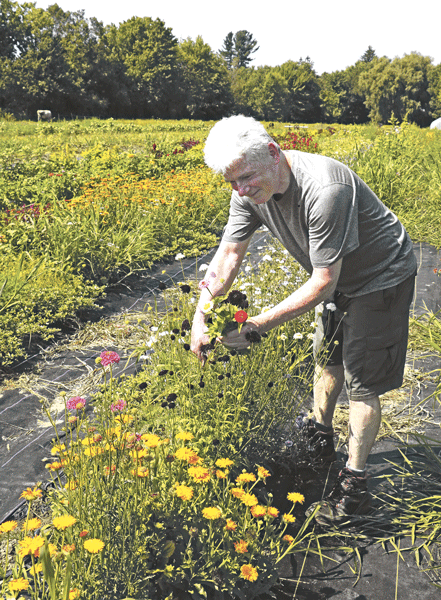 “It’s worked out well. We’re still working on financial success. It’s been a successful effort in a lot of ways. We’re working on making it more profitable,” Plotkin said. “We’re paying our bills, but not making a profit. The farm store has been slow to turn things around. It’s been surprising how slowly it’s caught on, but it has increased in customers.”

This year was the second year they were a vendor at the packed Greenfield River Festival, attended by thousands, in early July. They started out selling their produce at the annual North Quabbin Garlic and Arts Festival, and decided to offer fried garlic, French fries made from their own potatoes and hot dogs make from pork from their own pigs, as it was more profitable. Now they buy potatoes for the venues from local farmers and are taking a break from raising the 12 to 18 feeder pigs they used to buy in the spring. The farm also hosts its own seasonal events.

“We’ve got a giant project going on – a woodchip pellet boiler – and Dave is busy as livestock guy and project guy,” Plotkin said. The $250,000 project is financed by the Massachusetts Department of Agricultural Resources (MDAR), the USDA and MassClean Energy Center (MassCEC). The plan is to have a zero net energy greenhouse, with the woodchip boiler producing heat and solar panels producing electricity. Existing solar panels on the farm store roof produce 6.9 KW, but the farm uses more electricity. They receive a 50% credit for the electricity and are aiming toward zero net electricity costs. They have no woods, so the woodchips, at $100/ton, must be bought. They are a cheaper renewable source versus propane, for which they will receive alternative energy credits and a rebate from the state for using renewable fuels versus fossil fuels. MassCEC will pay them the renewable energy credits once they are burning woodchips, and some of the money spent on the woodchips will be rebated as a further incentive.

When asked who finds all the grants and available loan sources, Plotkin answered, “I do.” The farm and the workers and the community depend on all of them.