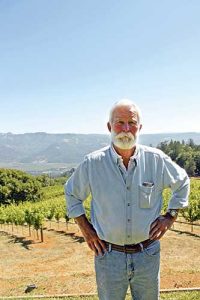 by Karl H. Kazaks
The area known as Cook’s Flat on Spring Mountain in California has been farmed since the late 19th century. It started when George Cook planted olive trees and grapevines.
The olive trees remain today but the vines were dead by the early 20th century, likely because they were planted on their own roots and killed by phylloxera.
“We found old wooden grape stakes in what had become forest,” said Charlie Smith, the co-owner of the vineyard which today occupies the part of Spring Mountain encompassing Cook’s Flat.
Charlie and his brother Stuart established Smith-Madrone Vineyards and Winery in 1971.
“It began as a hobby and got completely out of control,” said Charlie. The brothers had discovered wine while in college at Berkeley in the 1960’s and decided to make their own.
“For the first 10 years, Stuart and I did all the work,” Charlie said. “We pounded the stakes in, we put up the wire — we did the whole nine yards.
“There is literally nothing in the vineyard that we do not have extensive personal experience with,” Charlie said. “One summer we spent picking up rocks. We were clearing a two-and-a-half-acre field. We’d rip it, pick up the rocks, cross-rip it, pick up rocks.”
The Smiths started planting vines in 1972.
At Smith-Madrone, which is above Napa Valley’s fog line — and experiences cooler days and warmer nights than the valley floor — Riesling is planted on eastern slopes. Chardonnay is planted on northern slopes. Cabernet Sauvignon, Cabernet France and Merlot on southern and western slopes.
Some of the slopes are steep, up to a 34 percent grade. The soils are mostly red Aiken Stony Clay loam, on top of the Franciscan Assemblage and consisting of a collection of various rock types.
The vineyard is surrounded by a mixed forest of Douglas fir, redwoods and madrone — a tree with peeling, reddish-orange bark. When naming the winery, the Smith brothers decided to name their operation with the name of this distinctive Pacific coast tree.
The forest provides dappled sunlight in the vineyard, which the Smiths like.
Smith-Madrone didn’t release any red wines in 2008. The smoke from fires that year, they felt, particularly affected their high-altitude vineyard. They sold their production that year to a bulk buyer.
Another challenging vintage was 2011, which was wet. But thanks to its mountaintop location, the vineyards at Smith-Madrone dried out more quickly than did some valley floor vineyards that year.
“The hillsides are different from the valley floor,” Charlie said. “Not just a different microclimate, but a different climate.”
One of the reasons Smith-Madrone is able to make wines of such distinct character and ageability is because they sort grapes and wines into many different lots.
First, grapes from any one particular vineyard can be harvested in multiple passes. For example, the relatively compact five-and-a-half acres of Cabernet Sauvignon in Cook’s Flat is usually harvested in three stages.
To determine when to pick, the Smiths, according to Charlie “take a close look at the grapevines. It’s very helpful to know your own vineyard. What we do is custom picking at its most picayune.”
For weed control, the Smiths cultivate only every other row, to keep some amount of ground cover at all time. With the exception of new vines, all the vineyards are dry farmed.
In the winery’s early years, the Smith even propagated their own vines in a mini-nursery. Today, they buy vines from a commercial nursery.
The brothers have the help of Stuart’s son Sam, who has worked at the winery for several years after some apprenticing elsewhere.
For all of the wines, no bottling occurs until everyone agrees.
“We make a joint decision,” Charlie said. “Everybody’s got to be happy. We push and we push until everyone agrees.