This is the final column in the series breaking down some of the most relevant reports from the Southern Nursery Association’s 2019 Research Conference Proceedings. The scientists, students and researchers who experimented and studied the topics previously covered brought important information to growers of all kinds, and this last topic is one many vigilantly contend with – insect and nematode problems.

“Evaluation of Pyrethroids and New Strategies to Deter Ambrosia Beetle Attacks in Nurseries” by Zenaida Viloria, Ric Bessin, Win Dunwell, Ginny Travis, Christopher Ranger and Raul T. Villanueva, Department of Entomology and Department of Horticulture at the University of Kentucky and the USDA-ARS Application Technology Research Unit in Wooster, Ohio

The invasive ambrosia beetle has caused quite a bit of damage to ornamental plants, and were recently found infesting apple saplings in Kentucky. Spraying trunks with preventive pyrethroids is a common practice to protect trees, but their effect on the ambrosia beetle is unknown. As pyrethroid-treated netting is being used in apple orchards to stave off brown marmorated stink bugs, researchers decided to see if this approach would work on ambrosia beetles as well. 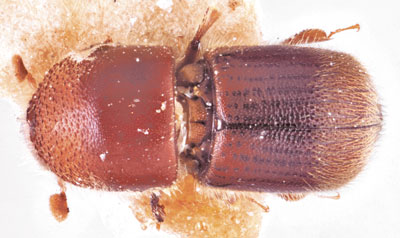 Ambrosia beetles tend to attack plants that are already weakened physically, and that’s why preventive pyrethroid sprays are helpful. To attract the beetles for this study, the researchers induced them to trees planted in seven-gallon pots filled with pine bark substrate. These pots were then placed inside 15-gallon pots lined with plastic and filled three-quarters with water – the plants were under flood stress from this from April to June. The trees were in two nurseries in Graves and Calloway counties in Kentucky and at the University of Kentucky’s Research and Education Center in Princeton.

Five net treatments were studied: individually wrapped trees, multiple wrapped trees, trees without protection set next to a wood edge, trees separated from the woods with a net and trees set among nursery stock. Ambrosia beetle attacks were induced in Fuji apple bolts, with a hole drilled into their cores. The logs were then subjected to different treatments by the researchers to attract the pests, including ethanol, ethanol and hardwood vinegar, ethanol and croton vinegar, ethanol and Mustang Maxx or ethanol and Baythroid XL. Each treatment was applied to nine bolts. Those injected with ethanol successfully attracted the beetles. Those treated with Mustang Maxx were not attacked by the beetles, but those with Baythroid were. This, the study says, shows that not all pyrethroid insecticides work effectively against ambrosia beetles.

As for the flood-stressed trees and their netting (or lack thereof): Only five trees out of 40 in Calloway County saw attacks from ambrosia beetles, and none of the trees in Caldwell and Graves counties did. The number of attacks was too low to determine net effectivity. However, the three selected sites had previously reported severe ambrosia beetle attacks. It is thought that tightening the plastic bags around the stems of the trees may have affected ethanol release from the flooded roots – and ethanol attracts the pest.

“Although the … netting results were inconclusive, the treated net has been successfully proven against other pests,” the study stated. The original experiment was conducted in 2018, and this report said it would be conducted again in 2019.

Many different woody ornamentals are grown in nurseries, and this results in many different potential pest problems. The predatory mite Amblyseius swirskii, sold commercially as swirski mite, is a generalist predatory mite that has been adopted recently as a control tool for a wide range of pests including thrips, whiteflies, eriophyid mites, broad mites and spider mites. This group of researchers decided to see how the swirski mite could work as a potential management tool for woody ornamental propagation through one outdoor and two greenhouse experiments.

In the greenhouses, the swirski mites were applied to potted flowering dogwood seedlings. The predators and prey were monitored weekly for three weeks. Additionally, four cultivars of hydrangeas with different trichome densities were treated with the mites (as variations in trichome density are known to affect the establishment of swirski mites in vegetable crops). Predator and prey counts were done for five weeks with these plants.

Outside, the mites were applied to 300 feet of Sun Valley red maple two weeks before propagation. The cuttings were held under mist for eight weeks; after the plastic was removed, two more mite treatments were introduced. The treatments were evaluated every other week from late July through September.

It turns out the recovery of the mites in all the experiments was a little difficult, as the swirski mite can move quickly when it’s disturbed. A challenge in the greenhouses was keeping them from untreated plants as well. At 21 days after treatment, these predators were recovered from dogwood seedling pots containing either a banker or a refuge plant, which suggested to the researchers that a continuous supply of pollen was necessary to maintain the mites’ populations once the prey were depleted. With the hydrangeas, the swirski mites were incredibly effective on the Ruby Slippers variety, with no broad mites found after five weeks. However, the swirski mites failed to establish on the other three varieties, which had substantially fewer trichomes than the Ruby Slippers. This just means multiple applications may be necessary on similar plants.

The swirski mites were also recovered from the maple seedlings which were held under mist, “suggesting that the treatment of stock plants may be an efficient method for distributing predatory mites into propagation beds,” according to the study.

These experiments show that use of the swirski mite definitely has promise for those growing both indoors and outdoors in controlling certain pests – but, as always, more work needs to be done.