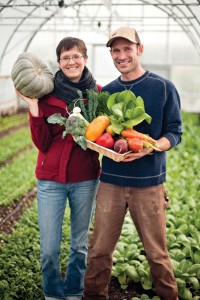 by Sally Colby
“The basic goal of lean production is to ruthlessly eliminate waste — anything the customer does not value — from your production system; essentially, to create your product with as few interruptions in the flow of work as possible… At first, I was skeptical. Did lean principles really have a place on a farm? Aren’t factories and farms very different places? Did I really want to turn our organic vegetable farm into an assembly line? What does manufacturing a trailer have to do with growing a tomato?”
That’s part of what Ben Hartman wrote as an introduction to his soon-to-be published book on lean farming. Adoption of the lean production model for their own farm, Clay Bottom Farm, is the result of Ben and his wife Rachel Hershberger experimenting with a variety of production methods, some more successful than others, but often lacking the continuity that would help them achieve year-round return.
Ben and Rachel purchased their Goshen, IN farm in 2008, and put up one greenhouse each year for the first four years. “One of our goals was to serve our community as much as possible and spend an hour or less on the road each week,” said Ben. “But more than that, we believe in a vision of farmers feeding their local community.”
Their lean production model is the result of a CSA customer who talked with Ben and Rachel about how lean principles would benefit their farm. The couple realized the concept made sense for their operation. Today, they’re year-round growers, harvesting greens and vegetables from 9,000 square feet of greenhouse space, and making a living doing it.
Ben says the first principle of the lean system is to let the customer drive the farm. “For us, that meant precisely identifying what they value,” he said. “On the surface, they value fresh, quality foods, but they also value service. For example, our CSA customers value fresh food and timely delivery. They also value help with meal preparation, so we market our CSA as a meal in a box. They aren’t getting an eclectic array of strange vegetables that they don’t know what to do with — they’re getting a meal.”
Growing greens and produce in the lean model requires careful forecasting of what customers want. “The worst form of waste on our farm is overproduction,” said Ben. “There’s nothing worse than growing a crop, harvesting and washing it, then not having a market for it. We carefully forecast and grow the amount customers will want.” In addition to the 60-share CSA, Clay Bottom Farm currently sells fresh produce and greens to six local restaurants, a grocery and at a farmers market.
During the first few of years of growing, Ben and Rachel focused on getting their product out and letting people know what they had. “Once people knew what we had and the business gained some traction, we did a lot of listening,” said Ben.
To achieve balance for their wholesale markets, Ben meets with customers annually to project needs for the coming year. He also communicates weekly via phone calls or text messages. “Many of our crops are quick growing and we can rotate them in and out in as little as three weeks,” he said. “In the case of microgreens, it’s as little as one week. By concentrating on those crops that have shorter growing seasons, we can be more flexible to meet market demand.”
Last year, Ben and Rachel grew about 40 crops, half of which were leafy greens like pak choi and Tokoyo Bekana that yield multiple cuttings. “Many of those we sell at different stages,” said Ben. “For example, we sell Tokyo Bekana in a microgreen mix,” said Ben. “Then when it’s at baby leaf stage, about three to five inches long, we add it to the Mesclun mix. We also sell it as a full-size head. It’s very winter-hardy and performs well here.”
Two greenhouses are heated through winter to a temperature of 30 degrees, which is enough to keep most greens crops alive. Crops are seeded directly on the ground and grown with organic practices as Clay Bottom Farm transitions to organic certification. “There’s something growing in the greenhouses year-round to maximize fixed costs,” said Ben. “We try to keep them full all year. The greenhouses act as above-ground root cellars to keep crops alive.” Clay Bottom Farm also produces numerous crops grown outdoors through the usual growing season.
When it’s time to choose seeds for the coming season, Ben and Rachel use the 15 percent rule. “Fifteen percent of what we do should be new,” said Ben. “Part of that is to keep it interesting for us. Sometimes a crop works, sometimes it doesn’t. We started growing ginger three years ago and it was a hit, so we kept growing it. Turmeric wasn’t popular so we stopped that. We also tried peanuts, but found that they require a longer greenhouse season than we can consistently count on. Financially, peanuts aren’t worthwhile, but as a novelty item for CSA boxes, they are worth it.”
Ben says their main pest issue is flea beetles on summer kale grown outside. “We’ve seen them on just any type of the Asian greens like Mizuna, pak choi,” said Ben. “The solution is timing — planting the sensitive crops before or after flea beetle season.” Ben is currently working on screening one greenhouse with insect mesh that will prevent entry.
Clay Bottom Farm maintains an internship program based on the school calendar. The first interns were acquired through advertising the position, but now word-of-mouth brings plenty of applicants. “The best way to keep an internship program active is to have fun, laugh a lot but also keep it educational,” said Ben. “They’re trading labor for knowledge, so I sit down with them for a couple of hours each week and go over our systems in a more academic way. I want to make sure they leave with the knowledge they came looking for.”