Spending summer to prepare for fall 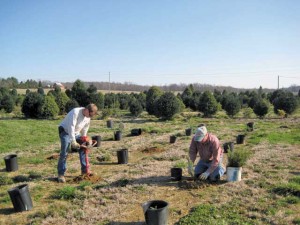 by Sally Colby
Larry Goebel and his family are the third generation to farm an expansive plot of land near Evansville, IN, but the landscape is a bit different than it was years ago. “My dad bought this place,” said Larry, referring to the home farm, “but I’m also farming my grandpa’s farm. I bought that when I started farming in 1969 and have been buying ground every chance I get.”
Today, the family grows crops on about 1,000-acres.“We have 110-acres of pumpkins, 9-acres of Christmas trees and the rest is in corn, soybeans and wheat,” said Larry. “We also grow Indian corn, Indian popcorn and other specialties.”
Larry says that Indian corn isn’t hard to grow. ”It’s open-pollinated and doesn’t produce a lot per acre, but we get an ear from nearly every stalk. This year, with plenty of rain and fertilizer, it’ll do well.”
Goebel Farms’ corn maze is one of the most popular in the area. Corn for the maze is planted last so the maze remains greener for longer. “This year we planted it the end of May,” said Larry. “My son Jeremy uses the computer to make a pattern and he puts the sprayer on the three-wheeler to make the path.”
The corn maze opens in September when pumpkins are ready to harvest. Pumpkins are picked for the on-farm market, or customers can take a hayride to the pumpkin field and select one from the field. Pumpkins are planted around June 15, directly seeded into wheat stubble. Larry has a spray regimen to keep pumpkins healthy and attractive for buyers.
We try to buy from different suppliers and get a lot of different varieties,” he said. ”If one doesn’t perform, another will.”
One specialty at Goebel Farms is gourds, although Larry says it’s challenging to keep mice out of them. “We have a building just for dried gourds,” he said. “People can come all year long and pick from those. The building is up off the ground, it’s all open with slatted floors and the cats can go in, but the mice still get in there.”
Larry says it’s difficult to bring many of the gourds to maturity and complete drying. “It’s hard to get seeds to germinate,” he said. “I usually plant about 2,000 seeds and get about 40 or 50 plants.” One of the most popular gourd varieties is the African bottle gourd, which reaches a height of 3 to 4 feet and has a 2-foot diameter. “The problem is that they need a long season and we don’t set a field aside for them, he said. “They go in after wheat with the other seed.”
Other gourd varieties include apple, canteen, birdhouse, caveman, Chinese bottle, dipper, swan and snake. “This year we have a gremlin gourd, said Larry. ”I’m interested in how they turn out. I’ve been looking for them for several years and finally found some seed. We plant every unique gourd we can get our hands on.”
The on-farm market opens the first of September and is open daily through just before Christmas. The market is filled with a colorful display of mums, Indian corn, corn stalks, pumpkins scarecrows and gourds. Goebel Farms grows about 1,200 mums for sale in the market. Larry says that when they first started to grow mums, it wasn’t easy. “We’ve figured out how to do it,” he said. “We plant them the first of June and have them on tables with an irrigation system. All we have to do is watch to make sure they aren’t blooming too early, and watch for aphids.”
The first Christmas trees on Goebel Farms were established in 1989. “I was raising hogs but my boys weren’t interested in working with them,” said Larry. “We decided Christmas trees would be more fun. They smell a lot better too.”
Larry says one of the main problems he encounters in growing Christmas trees is that birds, especially robins, which land on and break off the tender new growth.
Most firs don’t do well in southern Indiana, but after trying about 20 different firs, Larry found a Mediterranean variety that does well in the area. “We started planting them about six years ago, and we’ve been planting 3,000 every year, but they’re slow and grow double tops,” said Larry. “Another problem with Mediterranean fir is that rabbits love to nibble on it. It’s almost impossible to keep rabbits out in wintertime. A few years ago the rabbits got 1,200 trees in a four-acre trees in one weekend.”
After customers select a tree in the field, employees cut the tree and bring it in for shaking, drilling and baling. Additional cut trees, mostly firs, are brought in just before the season and placed on stands with water. A selection of B&B trees is also available.
As part of their fall activities, Goebel Farms offers tours for local schools. Daughter-in-law Jenelle manages the tours and the educational portion of the visit. A farm tour includes a stop at the petting zoo and a hayride to the pumpkin field where children learn about pumpkins from seeding to harvest. A smaller corn maze allows children to go through a maze without having to navigate a larger, more complex design. Children are also taken through the Christmas tree plantation to learn how Christmas trees grow.