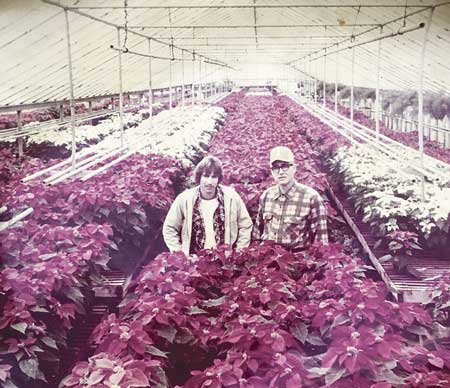 During the winter, the line at the sales counter can be five people deep at Stanley’s Greenhouse in Knoxville, TN. The greenhouse retail center is open year round.

They have 190,000 square feet under glass with an additional 36,000 retail space center that opened in 2001. They sell houseplants, vegetables, trees, shrubs, roses, pansies, poinsettias, herbs, heirloom and indoor and outdoor plants.

“The farm was here before [Tennessee] was a state. When this property was deeded, it was a territory,” said Lisa Stanley, a whirlwind of energy who is married to Rocky Stanley, son of Charles and Mary Kathryn Stanley who built the first greenhouses in 1955.

Their legacy began when a portion of the land was deeded to Charlie Davenport on Aug. 1, 1812. The original deed has recently resurfaced in family papers. Known as Davenport Farm, the farm became one of the largest wheat producers in Knox County. Fast forward a hundred years, and the focus became produce and cut flowers sold downtown at Knoxville’s Market Square.

Charles Stanley is Davenport’s grandson. When he and Mary Kathryn fine-tuned the operation by erecting greenhouses in 1955, they became Stanley’s Greenhouse. They segued into growing flowers as vegetable prices were very low, and flowers earned more money than vegetables.

Lisa was working at Stanley’s Greenhouse before she married Rocky 40 years ago. Her mother, Arzelia Allen, started working there in the 1970s, and is still there. Her daughter, Abby, studied Landscape Design at UT and also works at Stanley’s Greenhouse, making it three generations. The farm is currently co-managed by the brothers Monte and Rocky, Lisa, Abby, and Bill Stanley, Monte’s son.

In Tennessee, family heritage and lineage is cherished and sought-after. Many older farms have their own family cemeteries. The Stanley’s family cemetery is set back in the woods, high up to keep it away from flooding. During Stanley Greenhouse’s anniversary sale, in the second week of June, they give tours twice daily of the facility and the cemetery. That is very popular as the cemetery contains people from both sides of the Civil War. Unfortunately, some of the stones have been damaged, noted Lisa, but that doesn’t deter people take their time seeking their possible ancestors. “People enjoy the tour,” she said.

The Stanley family and their employees take their time giving customers their full attention. They sell 100 different varieties of roses, including David Austin Roses and Weeks Roses.

They are very active in giving to the community, donating to local schools. “We’ve always been a really big helper,” she said.

In February, they donated their greenhouse space to host the 2018 Winter Blues Wine and Cheese Party to benefit the Knoxville Ronald McDonald House, for the seventh year in a row. There was music, unusual ice sculptures and spectacular arrays of flowers. “We don’t charge. All money goes straight to the Ronald McDonald House,” said Lisa. And if anybody bought any flowers, 10 percent of those proceeds also went to the house who provides temporary housing for any family that does not reside within Knox County that has an injured or critically ill injured child receiving care in a local hospital, age 21 years or younger. Over 300 people attended at $40 a ticket.

Stanley Greenhouses stays ahead of the trends. “We’ve seen a very big resurgence in house plants because plants can clean the air. It’s very popular with college age students, growing and keeping them. Air plants and succulents are a really hot item.”

To help teach people to care for their plants they hold Saturday educational workshops from spring to fall, starting in February. Their mid-February workshop had 60 attendants, seeing an upswing in attendance, drawn by social media.

“I love working with people, trying to help them grow their plants,” said Lisa. If they encounter trouble, she assures them, “‘you haven’t met your plant yet. It may not be your first choice or your second choice.’ I just want to help.”