Stay ahead of Christmas tree health and vigor issues 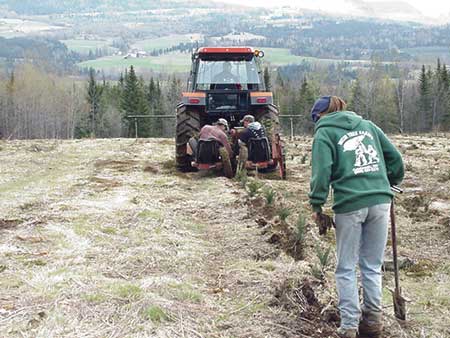 Christmas tree growers devote considerable time and effort to bringing a crop to harvest, but even the most seasoned growers have periodic issues with fertility, disease and insect pests.

But what about problems that aren’t directly related to what growers routinely monitor? Dr. Bert Cregg, associate professor of horticulture and forestry at Michigan State University, describes those problems as abiotic issues, or issues that stem from the environment.

“We don’t necessarily think of these things until something goes wrong,” said Cregg. “One aspect that makes these situations challenging is there may or may not be a smoking gun.” Abiotic issues can be subtle, such as in winter injury where some plants are damaged and others are not, or perhaps the issue occurred in early winter but there’s no visible damage until spring.

Many environmental issues are chronic. Cregg says that in a species trial, a Fraser hybrid showed more sensitivity to higher soil pH and declined over time. “It occurs over time and we watch trees decline,” he said. “That’s a typical with soil pH. It isn’t something that’s going to take trees out immediately, but will long-term and something you can probably respond to.”

Cregg lists some hints of abiotic issues, including damage patterns such as white pines that have obvious browning on the south side. Another example is winter desiccation, which might occur as the result of a bright, clear sunny day in February with two feet of snow on the ground that leads to reflected heat and light coming off the snow, resulting in one-sided damage to numerous trees. Good weather and temperature records help the grower determine if desiccation was the cause.

According to Cregg, the best approach to dealing with abiotic issues is plant selection. When a new field is established, conduct a site assessment and be aware of limitations such as wet spots and pH. Cregg says one site condition that’s critical to successfully growing conifers is drainage. “This is often a yes-no situation,” he said. “For trees that are not tolerant of wet feet (firs, some pines) they’ll let you know pretty quickly if they aren’t happy with the soil drainage. That’s why we want a good site assessment — look at soil surveys, perhaps do percolation tests and make sure the drainage matches the species.”

Cregg explains the soil-plant atmosphere continuum, a concept related to how trees respond to water. “The reason for this is how water moves through a plant,” he said. “Root pressure doesn’t account for the lift of water through trees — what does is the pulling force of transpiration.” While established trees can withstand a drought, transplants cannot. Irrigation is most critical at transplanting and over the next several years.

Too much water causes multiple issues, mostly due to lack of oxygen to roots. Many species are sensitive to reduced aeration to the roots, which leads to limited root development. “Nutrient uptake can be reduced with lack of oxygen,” said Cregg. “Root rot is a big issue, especially for Fraser fir. Phytophthora root rot is a problem for Fraser firs planted on a wet site. For growers in the Pacific Northwest, it’s the same thing with Noble fir. Another issue, especially with flooding, is sediment buildup and erosion around roots.”

Cregg is often asked how long can trees withstand flooding and he says a big factor is time of year. “When trees are dormant, they’re fairly tolerant,” he said. “Roots aren’t doing anything because of low soil temperatures. Depth of flood water can be an issue, especially later in the season. For evergreens, the part of the plant that’s under water can have problems, and we’ll see this in conifers when fields have been flooded for a couple days. They’ll be the inverse of that snow line — the trees aren’t killed but there will be dead needles on the part of the tree that’s under water.”

While excess water is harmful, it’s also the most common limiting factor in tree growth. Cold temperature will determine where certain species will thrive, but for trees hardy in a given area, year-to-year variation in growth is strongly related to rainfall and moisture. Dry soils can be irrigated or poor soils corrected with fertilization. Mulching improves soil moisture for trees in both nurseries and Christmas tree plantations.

In general, bottom land species tolerate flooding better than upland species. “A lot of Christmas tree species want to be ‘high and dry’, but in the nursery trade, you may have some other options,” said Cregg. “A lot of deciduous conifers are adapted to wet sites. Trees found naturally in wet areas, such as bald cypress, dawn redwood, larches, arborvitae and white spruce can handle wet feet.”

Most conifers like pH on the low side; 5.5 to 6.0 is ideal for both nursery stock and Christmas trees. Cregg says this is related to the impact of soil pH on nutrient availability, usually micronutrients such as manganese and iron. In cases where the pH is above 6.5 and close to 7.0, Fraser fir and some pines may become chlorotic and off-color.

Winter injury is a common abiotic problem and takes a lot of different forms. “Freezing damage occurs either early in the winter or late in winter,” said Cregg. “In the Midwest, we have issues with late winter injury. In the intermountain west, they see more issues with early frost damage.”

With direct cold injury, needle browning is often observed. It’s important to know whether buds were killed. “If you can pull off the bud scales with your thumb and forefinger at the terminal buds, you can look inside for the bud primordial,” said Cregg. “That develops into the shoot next year. So even though the needles are brown, the bud is fine.”

Roots have much less ability to acclimate and withstand severe weather than shoots. With containers or B&Bs, roots should be protected because they can’t withstand the same temperatures as the above-ground parts of the plant. Keep containers in hoop houses or mulch them in prior to the onset of winter and protect the roots of bare root stock that arrives in spring.

Plantations close to roads treated with deicing materials will sometimes have issues resulting from chemicals. “We can see symptoms similar to fertilizer burn and also reduced cold hardiness,” said Cregg. “It might not be the salt directly, but it reduces cold hardiness.” Cregg noted that white pine is especially sensitive to road salt and should be planted where they won’t be exposed.

Chemical exposure is an abiotic issue that is sometimes self-inflicted. Be careful with sprays and pay attention to mixing rates and weather patterns. Minimize drift to ensure sprays go where intended. Cregg says herbicide injury can be confused with other issues, but if injury is noted as it occurs and records have been kept, the grower should be able to distinguish the two.