Stop the disease epidemic while preserving your pollinators 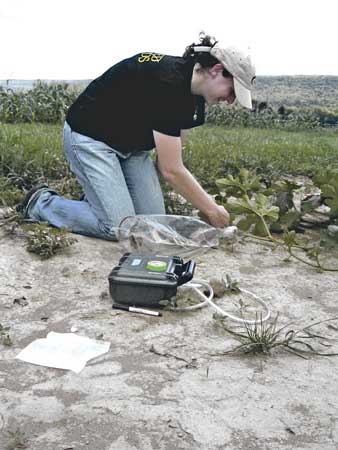 Bacterial wilt disease is caused by the bacterial plant pathogen Erwinia tracheiphila (Et). Et is an annual epidemic on Cucurbita spp. crops (pumpkin, squash, zucchini and gourds) and Cucumis spp. crops (cucumbers and muskmelons) in the Midwestern, Mid-Atlantic, parts of the southern U.S., and Northeastern U.S.

Bacterial wilt is transmitted by insect vectors — specifically the striped cucumber beetle. Et survives the winter in the digestive tract of diapausing (hibernating) beetle vectors. Plants in the spring are infected when newly emerged beetles feed on seedlings and leave frass with Et near herbivory wounds. Once inside a plant, Et clogs the xylem (water conducting vessels) and prevents the flow of xylem sap, ultimately killing the plant within several weeks.

Preventing striped cucumber beetles from spreading this deadly disease to new plants is key for control. However, systemic neonicitonoids, which are the least toxic to farmworkers and effective for cucumber beetle control, are present in the pollen and nectar of treated plants and therefore is thought to harm pollinators.

What’s a grower to do?

There are significant steps a grower can take to protect plants against bacterial wilt while minimizing harm to pollinators, as Penn State University Professor Dr. Shelby Fleischer explained to a large gathering of growers. A summary of his advice is as follows:

Start your trap crop plants in the greenhouse two to three weeks before your main crop plants, advised Fleischer. Blue Hubbard squash are particularly attractive to cucumber beetles and are recommended as a trap crop, especially with bright yellow plastic mulch. These trap crops should be managed to kill beetles — either by treating them with a systemic or foliar insecticide.

For a smaller grower, flats of early-started, neonic-sprayed trap plants, set on yellow plastic, can reduce the number of immigrant beetles dramatically. A mid-sized grower can plant Blue Hubbard trap plants around the perimeter of the crop.

If you scout, although the emergence of the new F1 generation of adults overlaps with the overwintering adult beetles, when that new generation emerges, you’ll notice an upsurge in beetle numbers. This is a good time for a quick knock-down spray, if needed, before the newly emerged beetles begin to mate and lay eggs.

Top scientific minds in universities in the Midwest, Mid-Atlantic and Northeast have been trying to determine how the small percentage of overwintering adults carrying the causal bacterium in their guts can drive epidemics of bacterial wilt.

One such researcher, Lori R. Shapiro, a Penn State PhD now doing post-doctoral research at Harvard and North Carolina State University, has found a partial explanation of cucumber beetle host plant choice that relates to pathogen transmission. Many insects, including many pollinators and herbivores, use the specific blend of volatile organic compounds released by foliage on plants to find the host species they prefer. By doing careful measurements of the volatile organic compounds (VOC’s) released by the flowers and leaves of healthy and Et infected pumpkin plants, Shapiro and other researchers found that the adult beetles preferred the odors of foliage on plants infected by bacterial wilt. These beetles also preferred to feed on wilting, infected leaves, which allows them to acquire Et and become infective vectors from leaf feeding.

Adding to the troubling potential of this behavior, Shapiro found that the beetles are also attracted to flowers on healthy plants relative to flowers on Et infected plants, due to the higher release of sweet-smelling VOC’s from flowers on healthy plants. In the healthy flowers, the beetles, some of which are carrying Et, emit an aggregation pheromone, which is a chemical that attracts other striped cucumber beetles to the same host plant population. Infective beetles that are carrying Et can infect host plants when frass contacts floral nectaries, and then moves into the xylem, causing an infection.

This epidemic-like spread of bacterial wilt is made possible in part, Shapiro believes, by chance mutations in the genes of the wilt-causing bacteria. Many genetic mutations are lethal, but the particular mutations happened to give this bacterial pathogen a survival advantage in today’s agro-ecosystems, where large fields of high-yielding, but unfortunately genetically similar, plants are grown in close proximity, so that mutated disease-causing bacteria could easily and quickly spread from field to field.

The agriculture of the future will need to find solutions to prevent the emergence and epidemic spread of such crop plant diseases, if we are to continue to feed a growing world population, Dr. Shapiro believes.