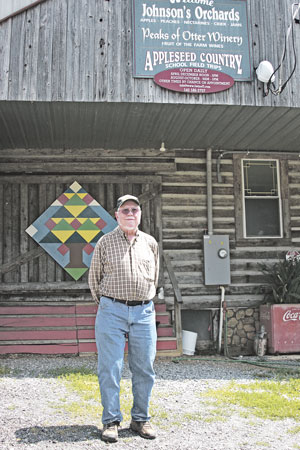 Hale and hearty in his 70s, a bearded and bespectacled Danny Johnson zooms up to his packing shed-turned-wine tasting room in a white golf cart.

The day is off to a brisk start at Johnson Family Farm Orchards and Peaks of Otter Winery. Several Hereford calves have broken through a fence to temporary freedom, and there’s an injured goat to tend to in addition to routine chores such as feeding livestock and spraying the apple orchards that will bear their Red and Gold Delicious bounty later in the summer.

Johnson, who has spent his life in the foothills of the Blue Ridge Mountains, and his family ready themselves for a busy summer season ahead, with apple and fruit harvests, tourists and locals coming to pick their own fruit, and the crafting of farm wines.

There has been a Johnson on this land at least since 1750, just before the official founding of Bedford County in 1754. Early Johnsons put down roots on a hardscrabble farm a few miles up the mountain ridge, where they too grew apples and turned them into a profitable harvest of hard cider and moonshine, a commodity that carried many families through lean times. Built of hand-hewn and whitewashed timber, the old farmstead clings to the flanks of the Blue Ridge Parkway and still welcomes many travelers and tourists. The farm hugs Stillhouse Creek, so named because a Johnson ancestor maintained a still there.

“Alcohol and fruit run in my veins,” laughed the orchardist/vintner.

Recently lauded by the Commonwealth of Virginia with a Centennial Farm Award, the current Johnson Farm (the site of the apple orchard and winery) was established in 1918 and the first apple scions were grafted from ancient trees on the first Johnson homeplace. Other members of the Johnson clan settled in the town of Bedford some nine miles away, where they established a mercantile, a furniture store and other businesses.

“In 2000, the Parkway (part of the National Park Service) asked me if I’d graft some starts for them from my great-grandfather’s farm,” recalled Johnson, known locally as “the P.T. Barnum of the Apple World” for his gift of gab, talent for marketing and amiable demeanor.

Although apple trees (Johnson grows Red and Golden Delicious and a few other varieties – including Ginger Gold, Gala, Stamen, McIntosh, Jonathan, Jonagold, Empire, Staman, Rome, Honey Crisp, Pink Lady, Fuji, York and Granny Smith – that thrive in the temperate climate of the Blue Ridge) have a lifespan of around 100 years, Johnson says his are most productive from an age of six to 16 years.

Despite advances in technology in his more than a half century in the orchard, his apples grown for the grocery store are still hand-picked and largely blemish-free.

“No machine can beat the touch of a hand,” said Johnson, who has a robust pick-your-own business in the summer and fall. Apples grown for processing (juice, apple cider and other products) are harvested mechanically, first shaken off the trees into bins, then slid gently into trailers. Spraying once conducted by hand is done from machinery pulled behind a tractor. Small producers like Johnson tend to custom fashion their own tools and machinery suitable to the task.

“I’ve gone from swinging blades to building my first weed killer . . . The apple business has become so specialized – if you think of it, you build it. Anything you can do to mechanize, you do it. We can’t really mechanize any more (given the dimensions and layout of the orchards), so I’m heading more to pick your own.”

Like other producers around the nation, Johnson has trouble finding and retaining help. In the past, he hired seasonal migrant labor, some of whom returned to his farm for a decade or more. Loss of help, plus China inundating the U.S. market with juice, forced Johnson to make changes to remain competitive. When he first entered the family business, Johnson noted, there were about 50 orchards in the county, but now there are only a handful.

“I could get my expenses back from the fresh market, and then apples grown for processing would be my profit. In the 1970s, we switched to growing only and sold only to packers,” he explained.

The 1990s witnessed a resurgence of old apple varieties, known for their long shelf life.

Most of the patented varieties, including Golden Delicious found in 1914, were “chance seedlings,” discovered in old orchards. Ginger Gold also was one found in the woods in 1969 after Hurricane Camille swept inland into neighboring Nelson County.

Johnson said he grows roughly 400 bushels per acre on his 255-acre farm (25 acres are in apples), with the remainder of the land devoted to a host of other purposes, including farm festivals, educational school tours, the winery, founded in 1995, cattle production, and a bed and breakfast getaway in a family homestead called Elmo’s Rest.

Some of the annual apple harvest is saved for gleaning by volunteers from the Society of St. Andrew, a non-profit organization serving soup kitchens and other feeding centers for low-income and homeless people.

Before one of their two sons and two grandsons took over management of the orchard and winery, Johnson and Nancy, his wife of 58 years, presided over the operation as a certified apple inspector and packing house supervisor.

“It was Nancy’s idea for the winery,” which touts 35 types of the beverage, made from the traditional grapes and other fruits, he said. “She said if we had wine signs out front, we’d get more people in here to pick apples. She was right about the wine. People come in here to taste . . . but we didn’t sell more apples.” Why? Customers busy with careers and families don’t have the time to put up big batches of apples anymore, preferring to purchase the fruits for quick consumption by the half bushel, peck or bag.