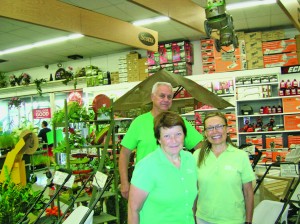 by William McNutt
Jack and Ruth Strader met each other at Ohio State, where Jack was an instructor in the Department of Horticulture after completing Bachelors and Masters degrees, following service in World War II. As a Home Economics student, Ruth was Secretary to the legendary Dr. L.C. Chadwick, pioneer teacher and leader in the formative years of Ohio Nursery and Landscape Association. Jack was lab assistant to Chadwick. Soon the young faculty member and student secretary became acquainted, then engaged. Over 60 years later Jack, 92, and Ruth, 84, still maintain a presence at Strader headquarters, with six Garden Center locations offering the largest such business in Columbus and central Ohio. This all began with Jack’s dream of having his own nursery business, an enterprise that seemed out of reach in the beginning. Nobody would lend money to a young couple with few financial resources, but finally he secured a loan that helped start a small garden center and landscape business.
Ruth was sole proprietor of the small store opened on King Ave., just South of OSU in 1951 while Jack was on the road mowing lawns, clearing brush, trimming trees, in general improving landscape in the city, all the while building a solid reputation for good service while his wife ran the store, dispensing gardening advice plus selling the equipment to carry it out. They earned little profit for the first two years, then began to build income, while investing any surplus back into the business, to the point where a second store was opened on Riverside Drive about five miles north of the first one, to serve rapidly build up in suburban locations. Today this location is company headquarters; as Jack says “about three times the size when it started.” Daughter Patty Anderson returned to the company as overall general manager six years ago, after 20 years spent in Boston where she also trained as a floral designer, then seven years in Cincinnati in business with her husband.
Ms. Anderson is a graduate in horticulture from OSU, as are her sister and brother Steve, who calls on prospective customers and current accounts. Sister Mary Brennen works in the headquarters business office, and manages apartments located at the Riverside campus. All three will be on the floor assisting at any time they are available and needed, answering questions, giving directions and making sales. Patty looks for similar type experience when hiring employees, remembering her own training plus the experience gained over many years of similar duty. She says personality counts for as much or more than knowledge of the business, for which an inexperienced employee can be trained.
Store managers are usually picked from in-house employees, although the senior one almost grew up in the Riverside location. Al Barnett, long time Riverside manager who went to work for Strader’s when he was 19, and is now approaching 70, remembers when Mary and Patty, who actually had a crib kept on site while Ruth was on the floor, were little girls learning the business under family and senior employee supervision.
Grove City, at the Southern end of Franklin County, was the third store to open; the Shawnee location, adjacent to the Columbus Zoo was next; both had space available for greenhouse construction, meeting Jack Strader’s longtime goal to grow as much of the product sold in their garden centers as possible, including to wholesale outlets. Termed by Patty as “a visionary who loves to build, stay ahead of the competition,” Jack saw the completion of six stores when the last two went up on West Broad Street, almost to the county line.
Each in-house garden center has every conceivable gardening need: all types of supplies for landscaping, lawn care, mulches, fountains and ponds, to name a few. Landscaping services are offered in cooperation with an owner who needs and wants help in carrying out his/her individual plans, but no designs or drawings are done, rather the effort is assisting what the owner envisions, such as a rain garden or tree planting location. Mower repair is offered for all vehicles with Briggs & Stratton engines, which run all mowers sold in the centers. Aids for younger urban households in more confined quarters include pots, ceramic tile, containers, bedding plants, hanging baskets, herbs, in-season vegetables and small fruits. This miniature gardening in window sills and balconies replicating larger gardens with increased diversity, offer expanded opportunities for urban agriculture, meeting the ever expanding trend for locally grown fresh food, even if on a smaller scale. Veggies grown for retail sale at Strader’s garden centers include peppers, herbs, tomatoes, cucumbers and squash. They also do a large amount of business with schools in selling at discount products to be used in fund raisers.
Both Jack and Ruth Strader came from humble beginnings, both born to poor rural families, growing up with little money. Ruth observed that one of her primary reasons for winning a college scholarship was to gain a residence with running water. Jack attended college on the GI bill, or would not have gone otherwise, and saved money while doing so, although per quarter tuition at OSU was then $50, soon raised to $75 when the post-war military invasion increased enrollment from 12,000 to 23,000 by 1950 (it’s now 50,000). Hard work and perseverance, coupled with a great business sense, featuring excellent service and the vision to anticipate what was coming the future, have insured the Strader name will remain paramount in the nursery industry for the foreseeable future.