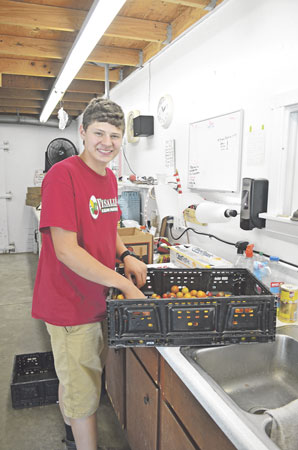 It’s impossible to travel to the Jersey shore without seeing numerous farm stands and markets. While some are as simple as a wagon parked by the side of the highway, others, like Visalli’s Farm Market in Mullica Hill, NJ, have upped the ante.

After Joe and Grace Visalli were married in 1955, they stayed on Grace’s family farm in Mulllica Hill and continued to grow produce. Although their main market for fresh produce was canneries and produce auctions, Joe built a simple farm stand and sold produce from that stand until 1968. The young employees who worked at the first stand were supplied with nail aprons and pencils and pads to hand-write customers’ purchases.

“Then I built a 10-by-20 market around the one I already had,” said Joe. “We worked out of that until 1989, and that winter, I built the market we have now. But in the spring of 2005, the day before we opened, the market caught fire.” The damage was repaired, but not long after Joe decided to close the market. The market remained closed for seven years before it was reopened.

Today, Joe’s son Mike, who grew up on the farm, oversees growing at Visalli’s Farm Market. He starts seeds in late February and early March, then transplants to larger pots. “We plant out in the field toward the end of April and the beginning of May,” said Mike. “We started using black plastic mulch and drip irrigation in early 1990s and shortly after that, we started staking and stringing tomatoes. It’s beneficial for quality and yield.” Mike added that staking and stringing promotes air circulation, which helps limit disease.

Two greenhouses behind the market are used for seed starting and young transplants. As soon as transplants are out of the greenhouse, the facilities are thoroughly washed and prepared for the next year’s seed starts. Although the season starts with bedding plants, hanging baskets, strawberries, lettuce and other spring favorites, many customers are eager for the first tomatoes and sweet corn.

Tomatoes are one of the most popular offerings at New Jersey farm markets, and Visalli’s Farm Market is no exception. Mike considers several traits when he selects tomato varieties. “Taste is always going to be number one,” he said. “Size and color are important too, but taste is the biggest.”

Mike says Visalli’s go-to tomato variety is Sunbrite because it works well in the weather and meets the flavor criteria. Mike also grows cherry and grape tomatoes, which are popular among market customers. Although heirlooms aren’t the mainstay at Visalli’s Farm Market, Mike grows a few, including Conestoga and Mr. Stripey.

In addition to their reputation for high quality tomatoes, Visalli’s Farm Market is a favorite for sweet corn. Mike plants sweet corn weekly throughout the summer and repeats plantings for 10 to 12 weeks, with the latest plantings reaching maturity by the end of October. “That way we’re always going into a fresh field,” he said. “I like to grow sugar-enhanced varieties like Mattapoisett rather than the super sweets – I think they’re sweeter. I know the people at the market like it better, and I get comments from customers who say they can tell the difference.” Mike added that sweet corn sales slow down toward autumn, so he doesn’t plant as much.

Another popular market item is eggplant, which thrives in the warm, sandy New Jersey soil. Mike grows four varieties of eggplant, including Chinese eggplant and Shooting Star. “The Shooting Star is pear-shaped, and we usually try to cut them when they’re about four to five inches long,” he said. “We don’t want them to get too big.” Mike also grows a variety of peppers, including his favorite, Long Sweets.

Although he doesn’t grow everything offered at the market, Mike provides a balanced selection by purchasing produce from other local growers. “On the price sign, there’s a note about where that item came from,” he said. “If it’s ours, it has our name on it. If it came from a neighbor, it has their name and the town so people know it’s Jersey and it’s local.” Mike added that while he doesn’t grow fruit, he brings in local peaches, blueberries and other seasonal fruits.

Mike noted some of the changes he’s seen over the years. “People used to come in, buy what they wanted and leave,” he said. “Today, people are more interested in how we grow and where it’s coming from. Local, fresh produce is becoming more popular for everyone. The chain stores are changing their produce sections to make them look more like a farmers market because they know that’s what people are looking for.”

As the season progresses, the market reflects what customers seek in autumn. “I grow some pumpkins, but I bring most in from neighbors who grow them,” said Mike. “We start with pumpkins and mums earlier every year, and sell them until we close.” Mike added that mums arrive in September and sell well until the market closes for the season at Halloween. Locally grown apples and sweet potatoes from other growers add to the autumn atmosphere at the market.

Many of the customers who visit the market, especially on summer weekends, are visitors heading for or returning to the Jersey shore. “But we still have quite a few local people who stop in,” said Mike. “They know when to come – when the traffic isn’t backed up on weekends.”