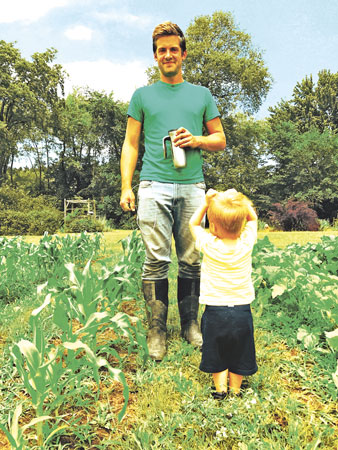 BELLEVILLE, MI – “This is not a typical choice of profession for our generation,” Brittany Denis recently tweeted. “It has been really frustrating for us, as millennials who are also old enough to be parents, to watch all the millennial-bashing … Time Magazine dubbed us the ‘Me Me Me Generation’ and yet here we are, running a business in which we think far beyond ourselves.”

That business is the five-acre Sunset Harvest Farm in Belleville, MI. Brittany and her husband John, both 32, started the farm in 2017, growing GMO- and chemical-free herbs, fruits and dozens of different vegetables.

It wasn’t always their goal to start a farm. John, who is originally from Michigan, didn’t really know what he wanted to do when he first started attending college. His sophomore year at Grand Valley State University he took an environmental science class and said at that point, his life was changed. He switched his major to natural resources management and soon thereafter interned with a large vegetable farm outside Grand Rapids.

“I loved it, and my boss there was very inspirational,” John said. “He was someone that had grown up in Boston who just learned as he went, which meant I could do that too.” He added that first experience with farm life completely changed his life – he found a career he was passionate about.

In the meantime, Brittany earned her bachelor’s in biomedical science from Grand Valley State University before pursuing her doctorate in physical therapy at Des Moines University. She currently runs a clinic in Dearborn and describes herself as a “PT by day, farm girl by night.”

After grad school, the couple moved back to Michigan, where they needed a place Brittany could find a job but that also had a couple of acres they could farm. Sunset Harvest Farm, almost on the shore of Belleville Lake, was only the second property they looked at.

“This area is terrific, right between Ann Arbor and Detroit,” Brittany said.

Despite being about 25 miles from the two largest cities in the state, John said he feels like he’s in his own world out among his plants. He tries to grow a large variety each year, ordering 50 types of seed for the 2018 growing season, including native heirloom varieties. “We do the staples but also like to try new stuff. You can do a lot on five acres,” he admitted.

This year’s vegetables include beets, celeriac, fennel, garlic, squash, tomatoes and more, along with smaller batches of melons and strawberries.

Sunset Harvest makes a profit as a CSA, or Community Supported Agriculture. The farm sells shares before the start of the season, which will provide members with fresh produce every week during the harvest season. Almost every item is harvested the same day or the day before it is picked up. Full shares, which serve a family of four, sell for $500, while half shares are $300.

“The biggest barrier we had to selling the shares at first was people not knowing what all the vegetables were or how to prepare them, so part of what I do is write about them on our website and suggest recipes,” Brittany said.

Having a minor in nutrition in assists her with that part of the business. “It’s surprising, but there is more overlap between farming and my career than I thought,” Brittany said.

Even though this is only their second year selling CSA shares, John said it has been a successful one, as they have already doubled the number of shares from their first year.

“Now that we have a good handle on things, we hope to sell 100 shares next year,” he said. He sees more income from the CSA shares than the farmers markets they sell at, as the shares sustain the farm through the off-season. The markets were important when the farm first started, however, as John would record what people purchased to figure out what to put into the shares. They also served as a conduit for getting information out about their CSA.

Sharing, whether its something intangible like information, or physical, like another local farmer mowing the land the Denis’ aren’t currently using for hay and trading with them for his compost and natural fertilizer, is an important tenet of Sunset Harvest Farm. “Community resources are huge,” Brittany said. “Sharing equipment and plans means you don’t necessarily need to make big investments up front.”

John also wants to share the farm itself. “We want to get more people out to our farm, and social media is so important with helping us do that,” he said. “We really want to get more people involved in the farm, educating people about why local farming is so important.” He and Brittany use social media to their full advantage, with their own website (which features a regularly updated blog), a Facebook page and a Twitter account.

And, while John admitted he likes “being able to just walk out the back door and going to work,” he’s always open to all kinds of opportunities.

“It’s so important for younger farmers like us to have other skills for other income streams,” Brittany said. “There are limitless opportunities in farming if you look for them, whether it’s writing or speaking or advocacy or something else.”

Her tweets emphasize how important this farm is to the couple: “No matter what struggles we face as parents, farmers and business owners, we wouldn’t trade this life for anything. We only hope we inspire others to take action, to view our generation in a better light … and leave this world in a better place than we found it.”