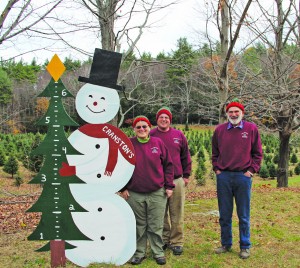 by Laura Rodley
Farmers are used to waking up early. So Cranston’s Christmas Tree Farm owners Cynthia and Tom Cranston weren’t too surprised when a friend called them at 6:30 a.m. in September. But they were surprised when the friend informed them they had aced the Triple Crown of Christmas trees at the Eastern States Exposition (ESE) in Springfield, MA: the pine, spruce and fir entries from their Ashfield, MA farm had all won first place.
Winners are eligible to enter the National Christmas Tree Association (NCTA) contest, held since 1966. One regional winner provides an 18 1/2 foot-Christmas tree for the White House’s Blue Room. Another winner provides a 12-foot tree for the vice president’s residence.
No strangers to success, in 2007 the Cranstons won first place at ESE, and entered the nationals. Cynthia said, “All our trees won. Our prize was to get to put a 12-foot tree in the VP’s residence.” They also met further qualifying criteria, having membership in their state’s association, Massachusetts Christmas Tree Association, and NCTA.
Growing such tall trees is work intensive. Trees entered in nationals are seven- to eight-footers. “We would be eligible to go and enter a contest but we have no 18 1/2-foot tree and we have no 12-foot tree. Trees we were growing for the purpose got real big, growing forever, they kind of break down, not the quality you would put in the Blue Room. At least Tom and I are not going to shoot for that honor again in our lifetime; it takes a lot to get a tree 18 1/2 feet.”
They were invited into the Blue Room to view the tree, an honor she upholds as a Christmas tree grower, celebrating 25 years of providing the trees that are the symbol of Christmas magic.
“We have put our heart and soul in it. You have to market your product, market yourself, keep at it in order to be a success. I don’t like mediocrity,” she said, growing 32,000 trees on 40 acres of their 170-acre farm. “We have entered trees in various fairs, Cummington, Northampton Fair and always the Big E. We do not grow many spruce trees or pine trees because the public doesn’t buy many of them, but we have some. We grow mainly fir trees, which are soft.” She’s particularly fond of Balsam, the kind they provided to the former vice president.
Tom’s grandfather, Ralph Leonard, bought the farm in 1941. “Barbara and Gardner farmed it. We bought it from Tom’s Dad, in 1975,” Gardner Cranston, as a dairy farm.
Looking ahead, in 1980, they planted Christmas trees. In 1989, mainly due to the milk market decline, they sold the cows, and sold their first Christmas trees — 53 of them. Tom had wanted a change from cows and his successful veterinarian business. However, his vet business proved providential in providing a lot of the income while the trees grew, as did selling hay. Having no cows opened up more time to spend on trees.
First there’s planting four-year-old trees, scouting for insects, then fertilizing, trimming and mowing in between rows during summer, and in fall, “grading trees for sale, lining up transplant purchases for following year, getting all your ducks in order so you’ll have plants coming in. It is actually an overall family practice.”
They sold wholesale and developed chose-and-cut trees through extensive marketing through their website www.cranstonschristmastreefarm.com and Facebook. From as far as New York City and Cape Cod, many cut a tree while visiting family and friends on Thanksgiving weekend. “There are a lot of local people that support us, a lot of people outside the locals, those that come via the web and Facebook.”
On Nov. 1 they opened on weekends for people to come tag trees outside or purchase farm-produced maple syrup, or ornaments. Tom and Cynthia’s daughter-in-law Maryellen, a breast cancer survivor, donates ornament proceeds to Northampton-based Cancer Connection, www.cancer-connection.org, as a way of giving back.
Hilltop trees provide photo ops, while Frosty the Snowman, and a sleigh with reindeer delight those seeking the Christmas spirit.
Someone recently seeking advice on growing Christmas trees asked Cynthia if she would do it all over again. She answered, “In a heartbeat.” Not only does she sell Christmas trees — last Thanksgiving weekend, she dressed up as Mrs. Claus, and read the classic, “The Night Before Christmas,” to visiting youngsters. “I thought she was wonderful,” said Tom.