Tail to root: fish and plants in harmony at Tangy Produce 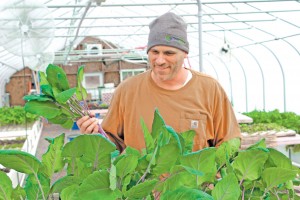 by Karl H. Kazaks
SHEPHERDSTOWNS, WV — Brian Tanguay’s aquaponics operation is growing about as quickly as the tilapia which are the backbone of his system. Tanguay first started practicing aquaponics commercially two years ago. Within the limited space of his home, Tanguay was growing plants full-tilt, selling produce at the Shepherdstown Farmers Market. “I started realizing I needed more capacity,” Tanguay said. He tinkered with vertical systems but realized he needed a greenhouse, so that winter he bought a 24’ x 96’ greenhouse.
Last spring, he erected the greenhouse on a parcel of land and moved his operation there, “We transitioned locations while never missing a farmers’ market,” Tanguay said. Last year, he sold at the Charles Town Farmers Market, when the market closed, he switched to a winter CSA, providing fresh produce to 32 customers with three pick-up days. Some of them are already looking forward to winter produce from Tanguay next year.
Tanguay grows produce in two 4-ft wide by 1-ft deep troughs that run the length and along the walls of the greenhouse. This spring he plans to add two more troughs down the center of the greenhouse. That will help him meet increasing demand, including from local restaurants.
So far, the increased interest in Tanguay’s business has come mostly from word-of-mouth growth. He does have a small-scale model of his grow system at a local coffee house, which helps drive visibility. This past winter he didn’t have time to build new troughs, because he was busy keeping his extant operation going and getting used to heating the greenhouse with an outdoor wood stove. During the coldest of this past winter’s frigid spells, he was refueling his boiler every three hours.
The plants grow through rafts made from two-inch thick rigid insulation board. The spacing of the grow-out spaces (there are 5,000 in the two troughs) depends on the size and maturity of the plants – larger plants get more spacing.
Tanguay grows lettuce, collards, watercress, beets, chives, collards, mustards, swiss chard, spring onions, cilantro, fennel, dill, parsley, cilantro, a variety of kales and mustard, cabbage, arugula and bok choy, among other plants. He is also experimenting with strawberries. Plants like peppers and tomatoes require more growing structure than that provided by an aquaponics system.
Though he may grow some produce in conventional soil pots to meet demand, the focus of Tangy Produce, which is a partnership between Tanguay and his fiancée Colleen Curran, is greens and herbs.
What makes aquaponics unique is of course the role of the fish. The fish provide nutrients for the plants and the plants filter the water for the fish. Tanguay grows white, blue, and red Nile tilapia. The fish are in their own stock tanks, elevated from the growing troughs.
Tanguay feeds the fish, keeps their water warm and oxygenated and the fish, through their excretions, provide a nutrient rich water supply that is the water in the growing troughs. “It’s like a healthy pond, loaded with healthy bacteria,” Tanguay said.
Because it is a living biological system, it’s not as easy to achieve target nutrient levels in grow water as it is in hydroponics (which offers more control). But Tanguay’s system is polycultural, with dozens of plants growing at the same time and the grow water stays in balance. If something gets out of balance, the fish will let Tanguay know. “The fish are the canaries in the coal mine,” he said.
The system stays in balance thanks to the nitrifying bacteria in the grow water, which turns ammonia excreted by the fish into usable plant nutrients. By keeping the fish alive in warm, oxygenated water, rich with the nitrifying bacteria and feeding them food which costs him about $20 per week, Tanguay is able to provide almost all his system needs. He does add chelated iron and would add calcium if his well water wasn’t high enough in that mineral.
Aside from his own labor and the cost of the seed and the growing infrastructure, that’s all it takes Tanguay to grow his plants. He controls pests like aphids and cabbage moths, by physically removing whatever he finds each morning, as well as with beneficial insects.
To help find the pests, he likes to clean his grow rafts. Clean rafts also reflect light better. Even when the troughs are not fully utilized by growing plants, he keeps the lengths of them covered by the rafts, to minimize evaporation.
The only pump in the greenhouse is a small unit that moves water from the bottom of the heat exchanger which sits next to the fish tanks and lifts the water from the exchanger to the top of the highest tank, about four feet. From there, water moves by gravity at a rate of about seven or eight gallons per minute, through three stock tanks and the two grow troughs.
Tanguay expects to add two or three more greenhouses to his operation in the coming years. He’d like to have a cool-water greenhouse, growing trout or perch, keeping the house cool with a geothermal system. He’d also like a warm-water tropical fish house and a third house for research and experiments. He also wants to add a media bed immediately downstream from his stock tanks, to grow worms to make a vermicompost tea and provide a substrate for growing plants like tomatoes and peppers.
So far, Tanguay doesn’t sell fish, they are the engine of his grow system, not a revenue stream. Tilapia are commonly used in aquaponics because they are hardy. “They can withstand mistakes,” Tanguay said, easy to breed, grow fast, are top feeders and are edible.
Tanguay admits that when he was first fooling around with aquaponics, “I killed a lot of fish, but I had seen how it worked and was determined to make it work.
“I used to think it was the fish that made the system go,” he continued. “But I’ve realized it’s the water, the bacteria. “It’s a pretty powerful system.”