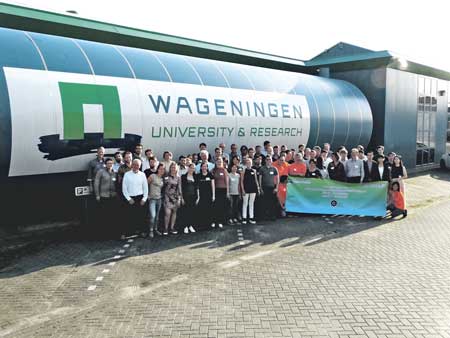 A 24-hour hackathon on Friday, June 1 at research location Bleiswijk of Wageningen University & Research, featuring 14 international teams, has determined which five teams will continue in this year’s Autonomous Greenhouses Challenge, organized by Wageningen University & Research. The five winning teams — Deep_greens, AiCU, The Croperators, Sonoma and iGrow — will get access to an actual greenhouse in the second half of the year where they will have to remotely grow cucumbers via artificial intelligence (AI) using as little input (such as water, nutrients and energy) as possible.

Fourteen teams with some 90 members representing 15 nationalities participated in the 24-hour hackathon. Many teams were physically represented at the WUR location in Bleiswijk, while other members were connected to the event online via Skype, phone and email. Interestingly, the teams actively consulted each other and shared experiences, which contributed to an informal and innovative atmosphere.

The hackathon consisted of two elements: A team pitch and the net yield achieved during the hackathon. In the end, the jury selected five teams to participate in the next round in which they have to remotely grow cucumbers in a real greenhouse. They are:

In the pitch, the teams had to present their scientific and applied approach to the actual autonomous management of a greenhouse with regards to climate, fertigation and cultivation. They were marked on their team composition (multidisciplinary, international, various companies/knowledge institutes and other important characteristics as defined by the jury) and their approach (new, functional, robust, scalable, use of AI).

The second part of the pre-selection process involved the hackathon results: The achieved net yield in euros. To participate, the teams were provided with a climate model and a crop growth model for cucumbers developed by WUR scientists to achieve a predetermined goal.

The organizers had ensured that the models contained so many possibilities that it created a game-like situation. It was theoretically feasible, for example, to make a financial profit 10 times higher than farmers can currently achieve in practice.

Using their own algorithms, the teams had to determine their own ideal setpoints for temperature, light quantity, CO2 concentration and a number of growth-related parameters, such as plant and stem density and growth period.