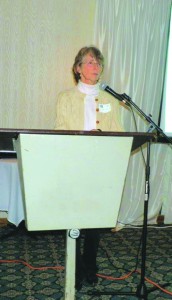 by George Looby
The annual meeting of the Connecticut Pomological Society was held on Tuesday, Dec. 2, 2014 at the Gallery Restaurant in Glastonbury, CT. The meeting was called to order at 9 a.m. by President Rick Macsuga and President-elect Erica Teveris. Each year the attendance at this meeting grows. This year, there were 112 registered attendees. Given the quality of the presentations, it is easy to understand the good turnout.
The lead-off speaker was Mary Concklin of the UConn Extension Service. Mary came to UConn from Cornell and is Extension educator for pomology and integrated pest management (IPM). Her topic was management strategies for dealing with a new pest in Connecticut — the brown marmorated stink bug.
This bug was first identified in Pennsylvania in 1999. It was initially observed as a plant pest in Connecticut in 2010. It winters over as an adult, has a wide range of hosts and does its damage with its sucking mouth parts. These mouth parts remove sap from plants and inject a secretion that discolors the flesh of affected fruits. To the well-trained eye, the damage appears not unlike that resulting from calcium or boron deficiency.
Commissioner of Agriculture Steve Reviczky commented on the role social media has played in promoting agricultural activities in the state. The Governor’s Council on Agriculture is engaged in pursuing its charge of identifying and implementing ideas and issues related to agriculture. A pilot program in adult education is being offered this spring at the Nonnewaug High School in Woodbury, CT. There will be three six-week courses offered, covering IPM, soils and fertilizers and tractor repair. The long-term goal for this program is for it to eventually be offered at the community college level.
The commissioner went on to say that he is working with the Apple Marketing Board to obtain a $100,000 block grant from the USDA to develop marketing strategies for Connecticut growers.
Jon Clements of UMass offered some suggestions on orchard weed floor management, including better working conditions for the picking crew at harvest time, less potential damage to equipment and reduced competition for water and nutrients. Reduced competition is especially important during drought. Weeds offer a good habitat for insects, pests and many disease-causing organisms. Early weed growth can also interfere with pollination.
Chemical weed control can be divided into two broad categories: residuals and non-residuals. The latter group generally considered to be more effective for grasses. When using contact products such as glyphosphate, the potential exists for tree injury, but the final determination on this remains to be resolved.
Sprayers must be calibrated before use to compensate for soil type. The current rule is that course-textured soils receive lower rates of application while fine-textured soils receive higher rates. It was suggested that new plantings be treated after a settling rain, but before weeds emerge. When using contact agents, it is best to split the application between spring and fall in order to achieve winter annual control.
Dr. Dave Rosenberger, professor emeritus of pomology at Cornell, addressed the issue of the severe fire blight that occurred this past season and suggested steps to prevent a recurrence in 2015. Fire blight is a bacterial disease, especially effecting apples and pears, caused by the organism Erwinia amylovra. This infection hit the orchards of the Northeast especially hard. Orchards that are three to eight years old are at high risk. European hard cider varieties are especially susceptible.
Sue Muldoon and Brian Kelliher of the Apple Marketing Board presented an update on the board’s new website. The board was awarded a block grant, which assisted in the development of the updated website.
Joe Bonelli and Ross Eddy spoke about some of the changes in the insurance program. Colleen Kisselburgh of the Arthur Carroll Insurance addressed some of the programs now available through the company.
The Award of Distinction for 2014 was presented to Scott’s Yankee Farmer, LLC of East Lyme for their outstanding operation.
After lunch, a three-farmer panel presented their individual views on varieties and rootstocks and answered questions from the audience. The panelists were Rod Dressel Jr. representing Dressel Farms, New Paltz, NY; Peter Rogers, Rogers Orchards, Southington, CT; and Mo Tougas, Tougas Family Farm, Northboro, MA.
Peter Rogers, an eighth-generation orchardist, explained the need for rather long-range planning to ensure that the orchard always has new plantings ready to replace trees who have outlived their productive lives.
Tougas Family Farm is located an easy drive from Boston, allowing them to sell 100 percent retail. The farm caters to a considerable ethnic market with very definite preferences, which they make every effort to accommodate. The varieties planted are chosen in part to have the season extend as long as possible. A mid-season variety, which they have found to be an excellent seller, is Honeycrisp.
Joe Bonelli spoke again about the Farm Bill, which has changes that will impact all participants. Beginning farmers will see a reduction in premiums, and for many there will be significant changes in percentages. Restrictions apply that need to be thoroughly understood, so managers should seek help in areas where any doubt exists.
Mary Concklin concluded the program with an overview of the Network for Environment and Weather Applications (NEWA) system as a tool for pest and orchard management. It includes 22 weather-based IPM forecast models. Connecticut will have 45 stations around the state by the end of 2015 with 24 on fruit farms and the rest at schools, extension offices, UConn and two at airports.