The Country Gardener: A community florist 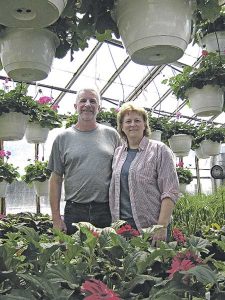 by Kristen M. Castrataro
For 64 years, the Brush family has been a fixture in the communal and business life of North Scituate, RI. Husband and wife team Russell and Amy Brush continue the family tradition of growing high-quality plants and providing customer satisfaction.
Russell and Amy were both raised in horticultural families. Russell’s father, George Brush, Jr., opened what he called “Brush Florist” in 1953. He started out as a “traditional florist,” doing weddings and cut flower arrangements. Gradually he shifted away from cut flowers and focused on growing live plants for retail customers.
Russell worked alongside his father and then studied horticulture at the University of Rhode Island. He recalls, “I always had dreams and aspirations of owning my own business.”
Amy Brush, née Dame, was born into the fourth generation of farmers on Dame Farm in neighboring Johnston, RI. She helped out on the farm picking sweet corn and vegetables.
In the fall of 1981, Amy walked into Brush Florist looking for a job. George was at the counter. He took her name and number, but informed her they were planning on permanently closing the shop at the end of the year. When Russell came in, George said, “A really cute girl came in here looking for a job today.” She ended up getting work at the nearby Ocean State Nurseries instead.
The following January, George did close Brush Florist. He and Russell hired on at Ocean State Nurseries themselves. A month later, Russell and Amy were dating.
The two married in 1985 and decided to re-open George’s shop under new management. Russell quit his job and “jumped in with both feet.” They called their enterprise “The Country Gardener.”
Building on his experience in wholesale sales, Russell’s original focus was supplying retail florists in Rhode Island and Connecticut. They did very little growing in the beginning, opting to buy in and resell about 75 percent of their product.
Russell wanted to produce his own plants though, so they eventually added two growing greenhouses. They now grow 85-90 percent of what they sell, only buying in specialty plants such as Easter lilies and air plants.
A few years after The Country Gardener opened, George left his job at Ocean State Nurseries to work for his son. Making use of George’s expertise, they started selling cut flowers and arrangements. Their flowers are currently in demand for local proms, funerals, high school music concerts, church services and community events. Local customers include a country club and the town of Scituate, for whom they decorate the town gazebo.
The Brushes’ marketing has undergone a gradual shift. Wholesale once made up 80 percent of their sales. It has decreased to around 40 percent. As is the case with many products, Russell notes that retail sales provide a better profit margin.
The Brushes have always been “very conscientious” about what they sell. Russell says customers know them as providing “quality — Better than the box store plants — Selling plants we know will survive in this area.” Maintaining that reputation requires careful, year-round timing and doesn’t allow much room for error.
For the spring, Russell and Amy plant 1,500 pots of home-grown daffodils, tulips, hyacinths and grape hyacinths along with Amy’s 85-year-old mother who also helps plant the bulbs. They also start vegetable transplants, annuals and perennials.
Summertime is the season for exquisite container gardens, hanging arrangements and flowering baskets.
The Brushes prepare early for fall, starting around 700 pots of mums. One of their highest-traffic weekends is Columbus Day Weekend, when 100,000 visitors flood the neighborhood for the Scituate Art Festival. Russell and Amy ensure they are stocked up on easy-to-carry items like air plants, Venus fly traps, succulents and Mason jars of cut flowers.
It is the Christmas season where The Country Gardener really shines, though. The Brushes grow 1,500 poinsettias, ranging in size from 4″-10″ pots in a variety of colors and styles. Amy hand-makes unique moss-form Victorian wreathes, kissing balls and boxwood trees right on the premises. The shop has also carried hand-made laurel wreathes created by a local wreath-maker using locally-sourced laurel, local greenery and roping. They are truly a one-stop shop for holiday decor.
Around the holidays, Amy offers a series of workshops on do-it-yourself Christmas decorating. Wreath-making, cut flower arranging and boxwood tree designing are some of the most popular classes.
Despite the volume of work, the full-time staff of The Country Gardener is two: Russell and Amy. (George passed in 1998.) During busy seasons such as bulb-planting and boxwood arranging, they will sometimes hire relatives. The rest of the time, they manage by themselves.
Even so, creating a healthy work-life balance is a priority. Amy says, “We were going to run the business; the business wasn’t going to run us.” To that end, they close the shop a couple times a year to take a vacation.
The Brushes continuously evaluate their business goals. Russell says they are “trying to stay small but be big enough to keep customers happy.” One way they have done that is by providing incubator space to their niece, Samantha Vadeboncoeur. Samantha is the owner/operator of Fleur de Fleurs, LLC, a floral design studio that specializes in weddings and other special events. Customers of The Country Gardener can have access to high-quality event services without adding another line to the Brushes’ to-do list.
It’s just another way of guaranteeing that The Country Gardener remains a community florist.