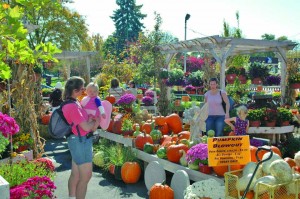 by Kelly Gates
The Zidlicky brothers John and Zbynek — also known as “Z” — are fourth generation nurserymen who recently decided to open a retail garden center in town to complement their family’s rural growing operation.
The new outlet, The Garden Faire, not only offers a place for plant and garden supplies sales, it is the perfect place for the range of events hosted by the company each month.
“Our main growing business is called ‘Garden Visions Nursery’ and includes all of our production facilities, including greenhouses and open fields where our trees and shrubs are grown,” said John, co-owner of the company. “Z and I added the greenhouses when we took over from our father in 1989. They are just simple Quonset-style houses, but they are exactly what we need to grow the plants we sell to customers here in Oswego.”
One of the five Quonset houses is used to cultivate hanging baskets and finished 4-inch flowers. The other four are dedicated to flats of flowers and six packs, perennials, vegetable plants and propagation.
The company grows some of its own trees and shrubs — many from seed. The bulk of the nursery stock grown there consists of rare or harder to find varieties.
“I really enjoy managing the retail end of things while Z does the growing. He just brought in a very unusual variety called Moringa Oleifera, which we will be selling soon as a food plant,” explained John. “The Moringa tree is packed with more vitamins and nutrients than a lot of other plants combined, so we expect it to sell well to our customers who share our commitment to learning how to grow for ourselves and how to eat healthier overall.”
One of the missions of The Garden Faire’s vegetable division is to promote the use of organic foods instead of man-made medicines for maintaining health, he added.
In order to practice what they preach, the co-owners and their staff implement organic fertilizers only. They also have an integrated pest management program that relies on native praying mantis, ladybug and other insect and animal populations to keep pests at bay in the fields. In the future, such beneficial insects might be intentionally introduced into their greenhouses as well.
Most of the plant inventory is kept at the nursery five miles away from the time it is planted until it is ready for sale. This enables the owners to keep their retail space as fresh as possible.
“We make regular runs to the farm to replenish plants and customers are also welcome to go out to the farm to browse through our entire selection,” said John. “People often go out to purchase bigger trees and shrubs. They can tag them to pick up later or take them home the same day.”
Customers appreciate this flexible offering. They also enjoy the host of events held at the retail outlet every month.
A local radio station makes frequent appearances at the site, usually tying its concert ticket giveaways to a fundraiser for an area association. PTA groups partner with The Garden Faire as well, with 10 percent of all sales at the store given back to the parent-teacher group.
“We host an annual chamber event here and an educational excellence program’s benefit too,” said John. “We have at least two or three special events per month throughout most of the year. It’s a fun way to get the locals involved and since we grew up here, we feel responsible for giving back to the community.”
In the winter, when most garden centers slow or simply sell Christmas trees and holiday décor, The Garden Faire goes a step further with an on-site skating rink, a miniature version of the rink on State Street in Chicago, aptly-named ‘Skate on State.’ The temporary ice-covered attraction at The Garden Faire is built anew each year using 12-inch wooden boards, plastic liner and hosed in water.
Guests can warm themselves by an outdoor wood burning stove and shop for a Fraser Fir or Concolor Fir tree shipped in from a Christmas tree farm in North Carolina. There is also an array of gift items kept inside during the holidays.
The Zidlicky family has worked hard to pack so much into its particularly small property in the middle of town. Eventually, the owners hope to add on, but only if the right opportunity presents itself, said John. “Until then, we’re happy managing our new retail space and continuing our nursery operation out on the farm.”