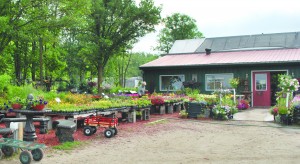 by Emily Enger
Dwayne Totzauer and his wife, Emi, arrived in Minnesota in 1991, a young married couple barely out of their teens looking to start life together in a new place. Though they were originally from California, Totzauer’s father had connections in La Porte, MN with a Christian community called Ben Israel Fellowship. When the Fellowship learned that Dwayne and Emi were searching for a place to stay, they offered the young couple shelter. It was perfect timing.

One of the Fellowship members was a greenhouse owner looking to retire. Decades previous, he had learned the trade for free from a generous Ohio man who donated a greenhouse to the Fellowship. The retiring man now wanted to pass on that same gift, so he approached the Fellowship asking if there was any interest in learning the growing business.
The Totzauers didn’t have any permanent plans, but operating a greenhouse was not on Dwayne’s list of career choices. “I had no idea what I wanted to do,” he admitted. “But flowers and guys don’t really mix, you know.” But Emi wanted to try it, so after some arm twisting from her, he decided to give it a shot. “And I was blown away,” he confessed.
The retiring man trained the Totzauers for eight months, providing comprehensive experience and education in the growing process. Not only was this training free — he also paid the Totzauers as employees. At the end of the eight months, he sent the young couple on their way with plants for them to sell. The Totzauers did not purchase his existing business, but began their own, called B.I. Gardens. They opened in La Porte as a single 20×100 greenhouse and stocked it with the generous man’s plants. “We sold everything he sent with us right away,” said Totzauer.
The training was transitional. The following year, they went back to the man for four months, and the year after that, two months. “And after that,” Totzauer laughed. “He was like ‘you’re on your own.’”
And on their own, the young couple with no formal horticulture education or history in the industry did very well. They started with three locations, each with a single greenhouse, and split the profits with Ben Israel Fellowship for five years, in gratitude for all that community had done for them. Then in 1996, they went fully on their own and purchased their existing facility in neighboring Bemidji, MN, renaming the business Country Greenhouse.
Growing Today
Totzauer has a few local trade secrets up his sleeve. He plants perennial shrubs and trees in ‘imported’ black dirt, preferring the peat-based soil of North Dakota’s Red River Valley over Minnesota’s siltier soil. He calls the famous farmland dirt “black gold” and even sells it to customers.
In addition to a large main building, Totzauer has 16 greenhouses on five acres. All told, his property totals 22 acres, much of which is wooded. It’s a far cry from his original single 20×100, especially with another 10 greenhouses expected to be added late this summer.
Expansion is not the only new thing at Country Greenhouse. This year, they have stocked Amber Jubilee Ninebark which has been incredibly popular. They have also tried some rose trees for the first time —Totzauer hopes the hardier tree will sell well in Minnesota’s harsh climate.
New to their growing practices is the use of organic insecticides. The organic products are much slower, taking 7-10 days to take effect versus the immediate results of conventional products, but recent concern over the decline of the bee population prompted Totzauer to switch products. “You just have to be patient with the organic,” he said. “Keeping our pollinators is worth the trade off.”
Heartbreaking Transitions
Country Greenhouse’s success was clouded in December of 2012 by Emi’s death from colon cancer. Today, a cross-shaped memorial hangs behind the counter of the business grown by her curiosity and push to try new things. “She was more than half of this place,” said Totzauer. But even in her absence, her husband — who never intended to ‘grow flowers’ — continues to run their business on the generous principles with which it began.
“Most of our employees come in with no knowledge of horticulture and we just teach them,” said Totzauer. He employs about 20 people during the summer season and about six during the fall and winter.
The employees are not the only ones who benefit from Totzauer’s green thumb education. He roams through his greenhouses, stopping customers to inquire about their project, making sure they know which varieties they need and how to properly use the products they buy. He also keeps a fridge of free treats and goodies for kids.
Country Greenhouse is now in its 23rd year. With an expanding business serving about 12,000 customers, and four daughters ranging in age from 5 to 24, Totzauer keeps busy. His journey into greenhouse growing, though unexpected, has proven life changing. “I’m very thankful,” he said.