The gift of space 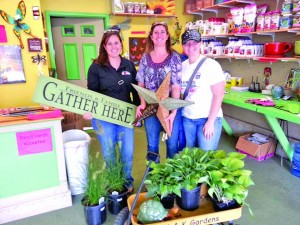 by Kelly Gates
When Keith and Kelli Kovarik began growing vegetable plants in their Hawkeye, Iowa basement and garage back in the mid 1990s, the couple never expected to turn their gardening hobby into a business one day. In fact, when they did eventually create a company, it wasn’t even their idea.
According to Keith, an elderly neighbor encouraged them to start selling their vegetable starts. She even offered up her property so they could expand several years later.
“When we first started growing plants, our neighbor, who loved gardening as much as we did, encouraged us to start selling to the public,” he told Country Folks Grower. “At the time, we were growing heirloom vegetables, which no one else was selling in this area and she believed we could have a successful business selling them to local residents. So we decided to sell for a couple of weekends each spring and the business sales at the company grew.”
K&K Gardens doubled its inventory and continued to grow quite rapidly from there.
Each year for nearly a decade as perennials, trees, shrubs, hanging baskets, annuals and other plant material was added to its list of offerings.
Cold frames were later erected on the Kovarik’s residential property to accommodate the ongoing expansion. Employees were hired to help during peak season and the business was kept open longer and longer each year until 2006, when customers were allowed in every day from May through September.
Eventually, the small growing operation ran out of room to develop further.
“We are located in the city of Hawkeye, so we were limited by the size of our lot,” said Keith. “The lots here are actually pretty deep, with around one acre each, most of which extends out back behind the homes. But when we reached the point of nearly bursting at the seams, we started looking at properties out in the country, thinking that was our only option to grow further.”
But there was another possibility K&K Gardens’ owners hadn’t considered, a simple, win-win solution suggested by their elderly neighbor.
According to Keith, the same woman who had inspired them to get into business in the first place offered to sell her lot to the Kovarik family as long as she could continue living there for the rest of her life.
“She wasn’t using any part of the property other than her home, so we were able to stay here and use her extra land for retail space,” noted Keith. “Our property now houses all of our display gardens. And we have purchased three other adjoining properties for a total of five city lots.”
Three years ago, their neighbor passed away and the Kovariks felt it was fitting to turn her house into a gift shop. After all, she had given them the motivation to start their business and gave the gift of space when it was needed, too.
Today, the gift shop is a popular place for customers to purchase everything from furniture and home décor to wind chimes, garden statuaries and unique planters.
They also come to the site to marvel at the myriad of plants in the display gardens and the various retail areas spread throughout the five lots.
“One of the five properties we acquired was converted into a parking lot while the lot where we live is still mostly filled with display gardens,” said Keith. “We will be putting up a 40 ft. x 90 ft. greenhouse on one of the lots soon that will be used to grow plants from seed or bare root, depending on the variety. The rest of the land is used for retail sales.”
Around 60 percent of the perennials sold at K&K Gardens are ordered in from suppliers, potted and grown into finished product for sale to customers. Perennials from the on-site display gardens are divided and potted up as well.
Shrubs and trees are ordered in as bare root and a selection of annuals, vegetables and hanging baskets are brought in as finished or semi-finished products, rounding out the inventory at the garden center.
Managing the company requires a staff of 10 during peak season, plus Keith and Kelli, who continue to oversee the entire operation. The owners need the extra help since they still maintain full time jobs outside of K&K Gardens.
“Kelli is a teacher and I work as a probation and parole officer,” explained Keith. “We will probably keep these jobs until our two young children are fully grown. Then, we hope to work here full time.”
While the husband and wife plan to work at the nursery exclusively some day, they don’t have aspirations to continue increasing its size. The goal, said Keith, is to expand enough to support the family without growing so large that the company has to employ a larger staff or rely on additional resources.
“When we experienced a drought that affected much of the country three years ago, we decided to downsize a little that year and again the next year,” said Keith. “Most of the downsizing was a shift in inventory from large ticket plants to high end gift items, a change that created a lot of efficiencies for us without impacting our profits.”
Other than a handful of additional alterations in the future — like adding the new growing greenhouse and tweaking the product mix from year to year — K&K Gardens will remain just as it is today, added Keith.