The sweet science of vineyard life 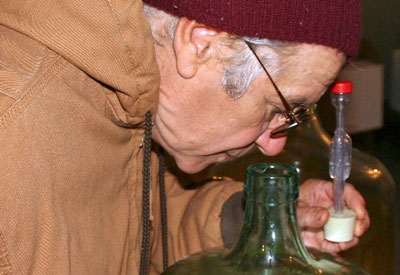 Is growing grapes an art or a science? To the Italian in Jim Verde, it’s absolutely an art. But to the biologist in him, it is most certainly a science.

“On the one hand,” Verde said, describing his grapes in a way far more paternal than professorial, “these plants all have such different personalities. They’re lovely. They’re my babies. And my name, Verde, means ‘green’ in Italian. I was meant to grow beautiful things.” But then, as if mentally putting on his old white lab coat, he added, “On the other hand, you can’t deny the inherent biology and botany in the bottle.”

Verde grew up with wine, having his first taste at his father’s knee when he was three years old. He laughed, “Homemade wine is not uncommon with us Italians.” He studied biology and botany at Boston University, earning both an undergraduate and a master’s degree. He then embarked on a 38-year career as a biology professor at the Community College of Rhode Island. He retired in 2002, and at a time when most people might be looking to slow things down a bit, Verde dove headfirst into his next passion. He purchased two and a half acres in Johnston, RI, 10 miles west of Providence. With that, Verde Vineyards was born.

“It is very much a vineyard,” Verde is quick to point out. “A lot of places are wineries, and there’s nothing wrong with that. But wineries can get their raw materials from somewhere else and produce their wines. Vineyards like mine are responsible for the cultivation of the grapes. We really have to get into the science of it all.”

When talking about the science of it all, the old professor emerges and begins an engaging lecture.

“Having a background in botany can be a real benefit when raising your grapes. That knowledge and experience can make understanding the nature of the fungi that can damage your crop easier. Now, there are over 1,000 breeds, which we call varietals, of grapes used in winemaking,” he said. “One of the problems we encounter is that different fungi attack different varietals at different times and at different temperatures. There is no one-size-fits-all method of spraying or treatment to address all that. You have to be well versed in the mycology of it all and be vigilant and proactively treat your grapes.”

Verde spends long hours walking among his vines, turning over leaves and looking for the first signs of any downy mildew. “If you wait until it’s obvious, you’re too late,” he stated. Verde is a firm believer in integrated pest management (IPM) methodology, consisting of preventative action, identification, analysis, treatment, monitoring and documentation. Whenever possible, he uses organic sprays. “A well planned and consistent spraying program is crucial,” he noted. 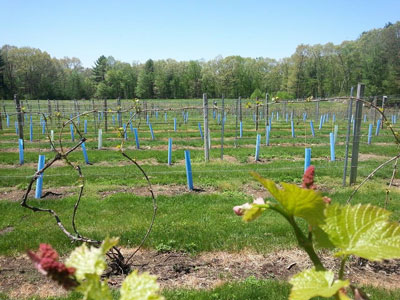 According to Professor Verde, American grape varietals tend to grow downwards, so tying them up gives them the space they need to grow.

A study of the differences between European and North American climates and varietals is also essential when planning what grapes to cultivate. According to the professor, “A lot of the varietals that make great wines in Europe do not like the cold. Here in Rhode Island, we lost 50% of our merlot last season due to the havoc our winter wreaked upon the European grapes growing here.” He stated that certain wild American varietals are hardier and can better withstand a falling thermometer. “The American grapes grow much more rambunctiously than the Europeans, which grow straight upwards and are easier to prune. The American ones want to grow downward. They can get to be 15 to 18 feet long here, so we have to tie them up to give them the space they need to grow.”

Increasing temperatures have also presented new challenges to viticulturists. “Too much heat can be harmful to the grapes, but addressing this by covering them up can cheat them of the sun they need,” Verde explained. “Grapes need sunlight to produce enough sugar. There’s a range you want to be in. If wine has over 20% sugar content, we say it has foxiness. Foxiness is associated with the sweet taste of Welch’s grape juice, and you don’t want that. But if you have less than 17% sugar, the wine will be too acidic.” Verde said many vintners in New England ameliorate this acidity by adding sugar during winemaking.

Always keeping abreast of how academia is addressing the problems grape growers face, Verde said a number of schools are developing new hybrid varietals that are better able to thrive in this climate while still producing the tastes oenophiles desire. “Cornell University gave us the Cayuga hybrid grape that’s quite disease resistant. The University of Minnesota has developed the Itasca and the La Crescent hybrids. They’re both cold hardy grapes and do rather well here,” he said. He also mentioned that Purdue University is working specifically on grapes that are best suited to Indiana vineyards.

Asked what his favorite varietal or wine is, the old professor quickly exclaimed, “Oh, no! You can’t ask me that! You might as well ask a parent who their favorite child is.” He admitted it’s a question he is frequently asked. He immediately counters with his diplomatic and well-practiced response. “Well, what food are you pairing it with? I can’t say which wine is best, but I can tell you what goes best with what.”

Verde is very happy with his small operation. “I’m sure some people thought I was mentally unstable when I got into this after retirement, but it’s a nice little vineyard. I know I’m never going to be written up in the Harvard Business Review, but this is a labor of love.” Verde Vineyards is open year round, but it sees most of its guests between May and the autumn harvest, which is Verde’s favorite time of the year.

He is also glad he gets to see the vast majority of his customers face to face. “We’re local, and while do have a small presence in a few nearby retail stores, most of our sales are here on site. We like it that way. We like having people come here for the experience of it all.”

And with that, class is dismissed. For more information visit www.VerdeVineyardsRI.com.