The Tree of 40 Fruit 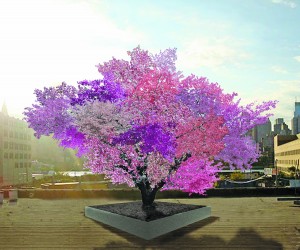 by Al Dorantes
In a 1,700-square foot orchard, hidden away in what used to be a junkyard for the sculpture department at Syracuse University, is the remarkable Tree of 40 Fruit. Initially, the Tree of 40 Fruit sounds like something from a fairy tale. But it’s not. It’s real — and it’s important.

The Tree of 40 Fruit is a tree that grows 40 different types of stone fruit, including peaches, plums, apricots, nectarines, cherries and almonds. The tree was created via the grafting process. Each fruit is specifically chosen and grafted onto a stock tree. In the spring, the Tree of 40 Fruit will blossom in various shades of pink, crimson and white. In the summer, it will bear a multitude of fruit. The Tree of 40 Fruit is made up of a variety of native and antique stone fruit trees, making the Tree of 40 Fruit a vehicle for conversation, preserving fruit varieties that are not commercially produced or available.
Syracuse University art professor Sam Van Aken grew up on a dairy farm in Reading, PA. In 2008, he started working with grafting. Sam followed in the footsteps of his grandfather and was guided by Jay Freer and Ken Livermore, who passed on decades of orchard knowledge to Sam. Van Aken found a multitude of stone fruit, native, heirloom and antique varieties not commonly grown in commercial orchards in an orchard at the New York State Agriculture Experiment Station in Geneva, NY. This orchard contained, pretty much, the history of the past 150-200 years of stone fruit cultivation. It was set to be torn out due to lack of funding. Van Aken picked up the lease on the orchard and preserved it until he came up with the idea of the Tree of 40 Fruit.
The orchard in Geneva had stored up what amounts to the history of stone fruits in America since the time of the Pilgrims. If Sam allowed the orchard to simply be razed, all that information would be gone. Van Aken said, “Syracuse University is super supportive. They helped with arranging the lease of the orchard.”
The lease allowed Van Aken time to preserve the varieties until they could be grafted onto a Tree of 40 Fruit. The Geneva orchard now lives on in the Tree of 40 Fruit.
Most modern stone fruit are grown for commercial purposes. A small green plum is relegated to the back corners of orchards while big, juicy, purple plums are grown by the bushels. If Sam Van Aken had not thought to preserve the stone fruit orchard, then plums like the Wangenheim plum may have fallen to the bulldozer. The Wangenheim plum was brought to America more than 200 years ago by German immigrants. If that plum was lost to “progress”, not only would the fruit be lost, but also all the history behind it. Who brought that small plum all the way from Germany? Why did they bring that one?
The process of creating a Tree of 40 Fruit starts with a stock tree. Van Aken uses chip grafting — a small chip of the bud is grafted onto the stock tree — to create the Tree of 40 Fruit. Van Aken takes a similar-sized chip out of the stock tree and places the chip bud into the stock tree. With chip budding, you want the size of the scion and the rootstock to be about the same size because it is easier to match up the green layers when combining the two trees. Sam controls the blossoming of the Tree of 40 Fruit with the direction of grafts. Each tree is like a snowflake, with its own map of grafts. Van Aken plans to do more than 2,000 grafts per year.
The Tree of 40 Fruits is also an exercise in patience. Each tree is a 10-year project. It’s a six-year process to get the tree grafted to have 20 varieties. Once a tree has 20 fruits on it, Van Aken will start to look for a home for the Tree of 40 Fruit. The cost for a Tree of 40 Fruit is $28,000. That seems like a lot of money, but most of the expense is involved with return visits. Van Aken will make six additional visits to prune and graft the tree to its final shape.
Van Aken said, “One of the reasons I got into this is because the farming community where I grew up is now a housing development. In some way, this is my way of preserving. If I can get these trees into the public then that would be pretty awesome.”
With over a dozen Trees of 40 Fruit already sited, Van Aken explained that a portion of the proceeds goes to starting an orchard of heirloom and native varieties in southern Maine, near Portland. The grove of four Trees of 40 Fruit will grow into an orchard that will be open to the public for fruit buds, stock and scion wood.
The Tree of 40 Fruit is an art project with its heart rooted in conservation. Every time Sam Van Aken grafts a bud onto a stock tree he is not only preserving stone fruit, but also a part of America’s past.