The twain enterprises of Tom Sawyer 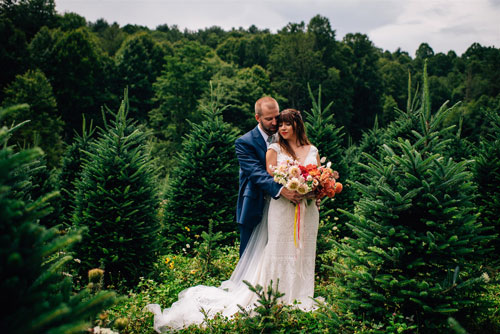 Let’s get this out of the way – Mark Twain is indeed his favorite author. Lamentably, his best friend is not named Huckleberry.And while he has never been on the Mississippi River, it is most definitely on his bucket list.

“Fortunately, I was always one of the biggest kids on the playground as a kid,” Tom Sawyer said, “so I never got too much grief about my name from the other boys growing up.” In fact, Sawyer has embraced the Americana inherent in his name. The logo of Tom Sawyer Christmas Tree Farm features the silhouette of a suspiciously familiar boy, wearing a straw hat and carrying a fishing pole over his shoulder against the backdrop of a white-washed fence. “Why run from it?” he laughed. “It’s a wonderful book!”

Sawyer is, in his own words, a “half-back” – a New Yorker who moved to Florida for a time, but when moving back north, only made it about halfway back. Sawyer stopped to put down roots in Lake Glenville, NC.

A certified public accountant for over 30 years, Sawyer found that his work in accounting allowed him a more flexible schedule to pursue outside interests other than the standard nine to five work week. Like his literary namesake, Sawyer can’t seem to help getting into misadventures on the side, which is really what his tree farm appeared to be in the beginning. “When we got the property, it was 80 acres of nothing whatsoever. There were no Christmas trees, no barns, nothing. It was a forgotten piece of property,” he said. Today, he is proud to say, “We’ve really built it up. We have a number of buildings on the property now, and over 40 of those acres are now actively used for agriculture.” 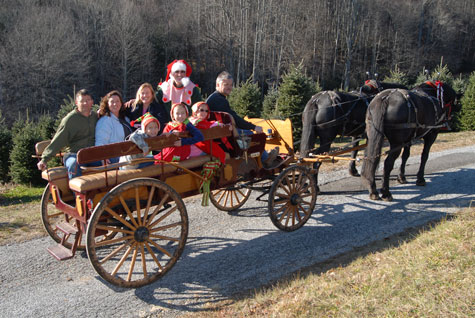 The business grew by leaps and bounds over the years. At one point, Sawyer Farm had retail locations in Florida, Georgia, North Carolina, South Carolina and Tennessee. In recent years, they have cut back and decided to channel their energies more intently on operations in the immediate area. “We used to sell the trees wholesale, but we’ve stopped doing that. I’m less interested in trying to do everything and more interested in doing the best at the things we do,” he stated. What they do, in short, is retail sales of Christmas trees (both at their North Carolina location and a secondary retail spot located 175 miles away in Chattanooga, TN), the holiday elf village and hosting weddings.

Sawyer Farm focuses on the Fraser fir, a perennial Yuletide favorite. The Fraser grows best above elevations of 3,500 feet, and Sawyer Farm’s 4,000 foot altitude is the ideal spot to cultivate the Christmas conifers. Sawyer Farm grows a great many Frasers – in fact, Sawyer has to add 60 seasonal employees to his usual staff of six in order to keep up with the demand they get between Thanksgiving and Christmas.

In 2009, Sawyer Farm added what has now become a featured attraction, its holiday elf village. “People come all the way up the mountain to get here,” Sawyer explained. “They pass plenty of other places where they could get their trees. They’re doing it because it’s about more than just the tree. It’s about the trip, the experience. It makes for a nice family day.” Sawyer and his crew have built up a little village with cottages for visits with Santa, face-painting, arts and crafts, storytelling, hot cocoa and cider and roasting marshmallows. Carriage and hayrides are also a big draw. Elf costumes are de rigueur, and are available for both parents and children to don for the day. The elf village is open on weekends from Thanksgiving through Christmas.

Nine years ago, Sawyer and his family decided to make their farm a destination venue for weddings. Sawyer Family Farmstead hosts both wedding ceremonies and receptions. According to Sawyer, “At the time I had an event planning business on the side. When I sold it, we kept a lot of the tables and chairs and things, so we had a lot of what we would need to open our own venue on the property.” Sawyer Family Farmstead offers a panoramic view of the Blue Ridge Mountains and Lake Glenville. The outdoor hilltop ceremony site is surrounded by green Fraser fir Christmas trees, mountain laurel, blueberry bushes and grapevines. A newly-built reception barn can fit 240 guests and has a spacious dance floor. The wedding venue is available from mid-April through mid-November.

Now in his seventies, Sawyer expects that he will retire in the not too distant future. As for his plans, he is noncommittal but sanguine; “Oh, I don’t know. Maybe I’ll just relax on a riverboat, signing copies of ‘The Adventures of Tom Sawyer.’ It’s not my book, but it is my name!”