The USDA battles with invasives 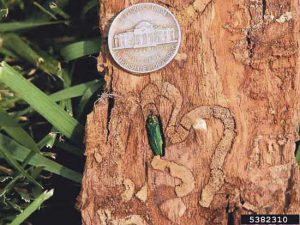 by Laura Rodley
Kate Aitkenhead and Ryan Vazquez of the USDA’s Animal and Plant Health Inspection Service (APHIS) Plant Protection and Quarantine (PPQ) spoke at the Invasive Insect Certification Program for Landscape, Nursery and Urban Forest Pests provided by UMass Extension in early February.
Faced with having 90 percent of invasive wood boring pests entering the United States on wood dunnage and solid wood packing materials (SWPM) at ports of entry, stopping pests before they enter and become established is part of the work of APHIS and the U.S. Custom and Border Protection.
In 2003, the Department of Homeland Security was created and the inspections of agricultural products at U.S. ports of entry were transferred from USDA APHIS PPQ to U.S. Customs and Border Protection (CBP). USDA-APHIS continues to implement new regulations and works cooperatively with CBP at the ports of entry. If an insect pest is intercepted by CBP, USDA will identify the pest and determine if action is required to mitigate the risk of pest introduction. If action is required, some options for the commodity include treatment, re-exportation, or destruction. Other treatment options are available for different commodities or solid wood packing materials. For example, heat treatment or fumigation with various chemicals may occur on SWPM in order to prevent the movement of wood boring insect pests. USDA also has programs overseas to monitor commodities and conduct treatments like hot water treatment or cold treatment before the import lands in the U.S.
USDA-APHIS monitors for the potential introduction of invasive insects in various ways. These include but are not limited to monitoring research facilities, universities and exotic butterfly conservatories.
Certain plants the USDA monitors must be quarantined, segregated, and grown for two years before they are allowed to be released. This allows the USDA to inspect the plant material for possible non-native pathogens which might not have been visually detectable prior to the 2-year period.
Using a technique known as biosurveillance, the USDA and collaborators monitor native wasps (Cerceris fumipennis) which bring back buprestid beetles they capture to underground nests. The beetles can then be sampled and identified. “It’s a really successful program,” said Aitkenhead. This system has been used to detect the invasive emerald ash borer and can be used to detect other target pests in this insect family, such as the gold-spotted oak borer.
When Boxwood Blight was detected, one affected nurseryman decided to destroy his whole seven acres of boxwood as a precaution against this pathogen.
There are domestic quarantines in place to not spread gypsy moth or Japanese beetles. Make sure if moving trailers, lawn furniture, or other equipment kept outdoors to inspect for egg masses of the gypsy moth, to prevent moving them to new areas.
Emerald Ash Borer (EAB), has been confirmed in 30 states. Trying to implement the components of quarantine surveys “to determine the extent of an infestation is a federal/state regulatory challenge,” she said.
“We do regulate all hardwood firewood, not just ash.” One way to stop the artificial spread of EAB through the moving of firewood and other regulated articles is to issue compliance agreements and/or certificates, once potential EAB host materials have been properly treated or safeguarded.
While not eradicating EAB, the USDA does have approved regulatory treatments to deal with EAB regulated articles which are: remove the bark, plus an additional half inch of wood, or a kiln sterilization treatment or fumigation with methyl bromide using a USDA approved fumigator. Heat treatments at 140 F/60 C at core for one hour in a USDA approved facility or chipping material to less than 1 inch in two dimensions are other options along with ISPM-15 (International Standards for Phytosanitary Measures No. 15) for packing material made of ash lumber, at 132.8 F /56 C for half an hour. At this time there is no approved treatment for Ash nursery stock and it cannot be moved outside the quarantine.
Ash can also be a host for Asian longhorned beetle (ALB), so it poses a double whammy.
The USDA is focused on eradicating ALB first found in Worcester, MA in 2008 by a concerned resident, from a 12 to 15 year old infestation on a tree.
The initial ALB culprit was found in Brooklyn, NY in 1996. “The beetle has a one to two year life cycle which gives us a heads-up to prevent infestation of twelve host trees, including maples, birches, horse chestnuts, elms, willows, poplars, and katsura,” said Vazquez.
ALB infested trees show compartmentalizing of exit holes and fresh eggsites. One tree was found to be infested for seven years with over 700 exit holes. “All it takes is one piece of firewood to start an infestation,” said Vazquez.
In a study in Ohio, monitoring infestation on tops of trees have been assisted by Unmanned Aircraft Systems or devices to take close-up pictures of the tree tops. Their effectiveness is affected by battery life and other variables inherent in the equipment, but useful where it is too dangerous for human climbing teams to ascend.
Massachusetts had 609 traps to monitor for Asian longhorned beetle in 2016. No beetles were detected in those traps and no adult beetles were submitted to the program from concerned citizens in the regulated area 2016, a decrease from previous years. “One of the options we evaluate is full host removal,” said Vazquez, including all regulated host genera. They also have conducted chemical treatments with imidacloprid as a part of the eradication program in the past, predominantly by injecting the insecticide into the trunk of uninfested host trees as a preventative measure.
Citizen beetle sighting is invaluable. To report a beetle sighting, call 866-702-9938 or access www.AsianLonghornedBeetle.com .