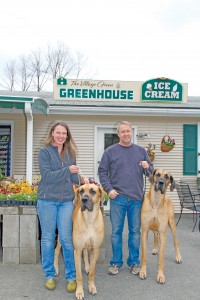 by Laura Rodley
Do what you like, like what you do and the rest will follow. That certainly works for husband and wife Mark and Annette Larareo. Enthusiasm is their middle name as they put out plants to sell in front of their business, The Village Green Greenhouse in Haydenville, MA; its been family-run for 29 years. Over the season they will sell 400,000 individual plants started in their greenhouses. Locals and those that drive by on busy Route 9 consider their opening on April 1 to be the first sign of spring.
“We’re the robins,” said Williamsburg resident Mark. His parents Joseph and Jean Larareo started the business and are still owners but not working owners. However, his father comes in for a few hours each day, and “hasn’t missed a day since we started planting. It keeps him alive, a reason to get up every day. My mom, she’s the public relations person, she sits outside at the picnic tables and talks to the customers.” Indeed, they consider all the longtime, repeat customers to be their friends even if they don’t know all their names, just their faces.
They also know their plants. They have three greenhouses, with 10,000 square feet of space. His favorite greenhouse, a 75’ by 25’, has stood on the property since the late 1800s, converted with polycarbonate. “It lasts 20 years, which is good for me; it’s my smallest greenhouse, most efficient, wind-proof because of the way it was shaped, the greenhouse I start my season in. I have a brand new heater in there, very economical to heat. Best covering, newest heater; I love that greenhouse.”
In 1987, they opened the ice cream shop to the right of the building, selling 24 kinds of ice cream. “That started the ball rolling, making it a destination.” Success even follows the food businesses that they rent space to beside them, with picnic tables to sit down, as customers are drawn in by the flowers, vegetable plants, gardening tools and ice cream. The seasonal Williamsburg Snack Shop that rented from them, serving lunch and dinner, became big enough to be open year round further down the road. Now Local Burger from Northampton, owned by fellow Williamsburg resident, Jeff Igneri is coming in.
Maintaining 16 feet of cleared space around their greenhouse this winter was challenging. With a foot of snow and more coming down, he had to make sure the bases remained clear. “I don’t lose greenhouses; in January, February, all I have to do is keep these greenhouses safe.”
“My wife gets right in here, she can do anything a man will do; she’s absolutely rugged. We’re the best team you can imagine. She does all the planting. In one day she planted 11,000 seedlings, 21 trays of 500. She’s like a machine. So in shape, we are just great together.”
They start planting in February, working 7a.m. to 7 p.m. and continue through Christmas. Last year they sold 700 Christmas trees, plus 500 wreaths that Annette decorated.
They are both constantly upbeat, even after the long winter. “We’ve got it down to such a science, can’t even call anything hard,” said Mark. Annette pointed out that the weather not cooperating might be the only drawback. It’s still cool, so ice cream selling is a little slow. However, as soon as the sun comes out, customers arrive in droves.
Though everyone’s wearing jackets, some people can’t stay away.  Longtime customer Angela Gewecke bought herself an ice cream and deliberated over the plants. “I love the plants, just love the ice cream and I love the people that are responsible.”
Annette has yet another draw. She raises and shows Great Danes, Ipo, and his son Oha that accompany the couple to the store. They both have long ears, rather than traditional cropped ears. Once bred to hunt wild boars, Great Danes’ ears were cropped to keep boars from biting them, and breeders kept that in fashion. Oha is the American Kennel Club’s “first ever natural” fawn Grand Champion, due to his having intact ears. “If Annette puts a picture of a plant up on facebook, no one ‘likes’ it. If she puts a picture of the dogs up, she gets 200 ‘likes,’” Mark said.
Great Danes, happy people, plants, ice cream, and soon, hamburgers, what’s not to like?