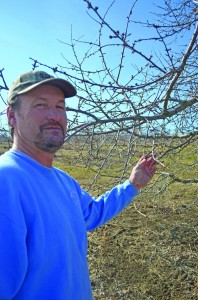 by Sally Colby
Families who operate successful farm businesses often hope that their children or other family members will be interested in continuing the farm. However, the process by which the transition occurs isn’t easy, and can be awkward and difficult.
Communication throughout the transition process is critical, and can prevent worry and extra expense. Many families avoid the planning process simply because they don’t know where to start.

Three Springs Fruit Farm in Aspers, PA, has undergone several transitions. From partnerships/sole proprietorships in the 1800s, to father and son partnerships and to the current structure that includes several LLCs, the Wenks have remained solid in their commitment to producing the best possible produce for customers.
Dave Wenk, who is in partnership with his brother John at Three Springs Fruit Farm, says the business has undergone several transitions. “The first was when my father created a partnership with me and my brother,” he said. “When each of us expressed interest in coming back to the farm, his strategy was to keep us from getting away. He incorporated us into the partnership before we got out of college. My family was very willing to turn over the reins.”
Changing times and business models equate to a need for a different business structure. “You start as soon as there is interest in the next generation returning to the farm,” said Dave as he explained the early process. “You have to ask a lot of questions: what do you want from this, how are we going to do this? You can have a lawyer and a separate accountant, but you need them as part of a team.”
When Dave’s son Ben decided to join Twin Springs Fruit Farm as the seventh generation, Ben wanted to start a different and separate business. Dave says throughout the process of bringing Ben into the business, the family was fortunate to have a consultant who had knowledge of accounting, legal matters and business management. “Once you start meeting with a consultant, you wonder how in the world you ever did without one,” he said. “We’re busy, and we don’t want to stop and talk. We don’t want to plan, we don’t want to pull back and look at our business from a distance. But once you start doing it, there are numerous advantages.”
John Wenk explained that the land is owned by the partnership, and that businesses are set up as LLCs. “The LLC is the operating entity of the business,” said John. There’s a gradual conversion of assets from the partnership to the LLC.” In addition, there is a rent-to-own agreement for the non-land related assets to make sure there’s equity in the LLC.
Ben, who graduated from Penn State University in 2006 with a B.S. in agroecology and a minor in horticulture, had significant experience in several areas of horticulture leading up to his role on the farm. However, he didn’t have a clear idea of exactly what he wanted to do after graduation. An email from a Philadelphia farmers market seeking vendors helped him find direction.
“That struck me as the thing I wanted to do,” said Ben, adding that Three Springs Fruit Farms hadn’t sold at farmers markets in the past. “It’s now our best market, and we do six markets a week during peak season.” Ben admits he didn’t know a lot about farmers markets prior to starting in Philadelphia, but he immediately started to learn from other successful growers. “We took everything we could to market — tree fruit we were already growing and about a quarter acre of vegetables,” he said. “Then we started growing small fruits, apricots, and other fruits we weren’t already growing.”
Ben’s formal education helps when he’s dealing with customers who have questions and requests. “I’m a big supporter of learning the science of agriculture in school,” he said. “When customers asked us for table grapes or strawberries, I knew I could figure out how to grow them.” Ben also believes that building relationships with customers is a key factor in a successful market. “We get more questions each year,” he said. “We were forward thinking about those issues, and in 2010 we were certified through Food Alliance. It’s part of the story when I talk with customers about our growing practices.”
The farmers markets play a direct role in helping the partners make decisions about what will be grown on the farm. “Crops for market are a major consideration as we’re deciding which blocks should come out and what we should add,” said Ben. “If it’s something that works well at market, and we can have a good wholesale market and we can get it packed, that’s an attractive option. We were already growing peaches, pears, apples and sour cherries, and also some sweet cherries, apricots and blueberries. We weren’t starting at ground floor level, but we were wise to get crops like asparagus and berries in the ground so we’d have them the next year.”
Although Dave and John have focused on the production side and Ben concentrated on the farmers’ markets, that arrangement will soon change. Ben wants to spend more time on production, which means he will turn the farmers market reins over to someone for this season, and guide that person as they take over market management.
What made Ben realize that he wanted to have a more active role in production? “It’s what the farm needs,” he said. “And being on the road all the time wasn’t what I wanted. There’s a lot more production for market that wasn’t part of the operation when we started doing farmers markets.”
“Communication is a big part of the process,” said Ben. “These are not conversations that come easily to anyone. It has a lot to do with more clearly defined roles, what do you want to do, and what you don’t want to do. These can be uncomfortable conversations at first, but for us, they were valuable in defining expectations as we moved forward. Hopefully we provided an example and encouragement for others in my generation that if they have an idea for the business related to the farm, this is how you can do it.”
Visit Three Springs Fruit Farm on line at www.threespringsfruitfarm.com or visit their Facebook page.