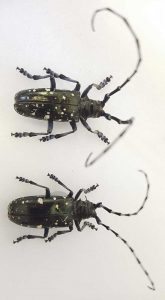 by Laura Rodley
Trade growth and enhanced commerce have aided many invasive organisms in their spread to new ecosystems.
Human mediated introduction is the way invasive insects and pathogens have entered and continue to enter the U.S. Ninety percent of the recent wood-boring insects arrived in the U.S. via solid wood packaging, or dunnage, and 70 percent of all damaging invasive insects have entered through agricultural shipments. Larvae can survive for months or years inside wooden dunnage or spools.
Sixty-three percent of the nation’s forestland is at risk of loss of basal area, notes Dr. David Orwig, of Harvard University’s Harvard Forest, speaker at the Invasive Insect Certification Program provided by UMass Extension. “Twenty-eight point four million (24.8) hectors will lose 20 percent of their basal area in the next 20 years.”
Once it enters a suitable microenvironment, the invasive pests feed, drop litter, and wipe out the native species, establishing a different ecosystem with short and long term impacts.
Prior to 1850, there were a dozen or so pests damaging trees. Since 1850, there are over 400, arriving at a rate of over four established per year. Loss of trees cost $2 billion in local government and $1.5 billion is borne by the homeowner in lost property values.
The Asian longhorned beetle (ALB), emerald ash borer (EAB) and hemlock woolly adelgid (HWA) are all invasive insects.
The ALB was first found outside its native range of China and Korea in Worcester, MA by a concerned grandmother out in her yard. “It was believed to have gone undetected in Worcester, MA for at least 10 years,” said Orwig. It leaves visible exit holes on its host tree. It is not a great flyer, and a tree can live up to a decade with ALBs. Worcester was quarantined and over 3 million trees were surveyed. There were also six ALB infested trees found in Boston, which have been removed.
Over $1 million was spent and from 2008 to 2016, with 34,000 trees removed. There was a subsequent loss of $489,814 in energy savings since the trees no longer provided shade or lowered temperatures, and a further loss of $905,769 in property values. Tree canopies and roots were no longer available to reduce storm water run-off.
By the Quabbin Reservoir, there was a $25 million drop in property values due to dead oaks affected by the gypsy moth, brought over from France by Etienne Leopold Trouvelot to his Medford, MA home with the hopes of determining a way to harvest its silk. “It escaped into his back yard accidentally after he brought it into Massachusetts on purpose,” said host speaker Tawny Simisky, UMass Extension. “We had a brutal year with gypsy moths this past season and are primed for another difficult year this season.”
Our version of the gypsy moth, the females cannot fly and are biologically different from gypsy moths in other parts of the world. The young larvae are transported by wind through a process known as ballooning. Some studies show that through this process, they can travel up to almost four miles. The females lay eggs on staircases, lawn furniture, and trailers with egg masses holding 75 to 1,000 eggs.
Good dispersal techniques aid the EAB. Adults can fly half a mile from the tree from which they emerged and sometimes go up to 12 miles. In immature stages, they can travel concealed while a person moves firewood from an effected tree, noted Simisky.
EAB has already killed 50 million trees, and threatens a further $8 billion loss. “The damage from EAB is unprecedented,” said Orwig.
“There’s too much trade going on. [We] have to try to find ways to curb these invasive pests,” said Orwig. Bottom line is importing using TreeSMART trade guidelines: Switch to non-solid wood packing materials such as plywood, foam, plastic and metal frames; minimize other outbreaks by expanding early detection and rapid response programs; augment international pest prevention; report violators; and tighten enforcement penalties for non-compliance. Current guidelines allow importers to violate wood treatment regulations five times per year before penalization. Stacked against 90 percent of wood boring pests arriving on imported wood dunnage, expectations are that these methods could be effective, “50 percent of the time, but still provide 11 billion in benefits by 2050,” as estimated by Orwig and study collaborators.
Certification program attendee, Bear LeVangie, is the New England regional presence in Petersham, MA. Having previously worked for the USDA as an ALB inspector, LeVangie started a new position in April for Bioforest.
“When the USDA decided they weren’t going to eradicate [EAB] anymore, the economic burden fell on municipalities that have their heads in the sand on how to budget this.” The population of Petersham is 1,200, with the largest acreage per town in Massachusetts. “A lot of that burden falls to landowners,” said LeVangie. To deal with it, plan for treatment or budget for removal. It can cost about $50 per tree for treatment, determined by the measurement of diameter, base and height (DBH).
Invasive insect risk increases due to global climate change. The spread of the Southern Pine Beetle (SPB), a native insect in the southeastern United States, effects jack pine, red pine and pitch pine. At the Cape, there is growing concern for pitch pine, because SPB has been trapped there and in other areas of Massachusetts. No tree death due to SPB has been observed in Massachusetts yet, but the public should be on the lookout for SPB due to the general trend of warming temperatures.
The DCR and USDA rely on the public to help alert them to the invasives’ presence, such as the grandmother in Worcester did. Make sure not to move affected wood. Access https://tinyurl.com/hmcssdv or umassgreeninfo.org or massnrc.org for more information and a location to report any suspected invasive insects in Massachusetts.