Trees for the Troops and more

Tradition, tribe and the troops – commitment to these ideals have made Fleming’s Christmas Tree Farm not just a successful business but a highly valued member of its community. 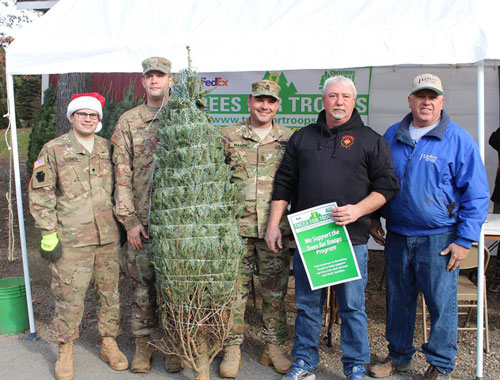 Founded in 1945, and located in Indiana, PA, Fleming’s has been thriving in the very heart of Christmas tree country. Pennsylvania is the fourth largest producer of Christmas trees in the nation, behind only Oregon, North Carolina and Michigan. Indiana, PA, itself is perpetually locked in a friendly but competitive rivalry with Estacada, OR, for the bragging rights of being the “Christmas Tree Capital of the Country.” While Estacada’s tree production is prolific and praiseworthy, Indiana laid claim to the mantle first. According to the Indiana County Christmas Tree Growers’ Association, the title arose in 1956, when a record number of 700,000 trees were cut that year in the county.

Now helmed by J.D. Fleming, the son of its founder, Fleming’s Christmas Tree Farm has been the driving force behind the family for the better part of a century. “I never had any formal training,” explained J.D. “I just grew up doing this. There was simply no way I wouldn’t be doing this my whole life.”

The farm operates on a 175 acres, filled with Canaan, Concolor, Colorado Blue Spruce, Douglas and Fraser firs. “Frasers are our most popular,” J.D. said. Fleming’s season starts as early as the first week of November, but according to J.D., “things really get moving the Friday after Thanksgiving. After that, it’s pretty much non-stop action until the Christmas holiday.” The farm offers both pre-cut U-cut options.

The farm is mostly worked by J.D., his wife Cindy and a cadre of local cousins. There is a small seasonal staff brought on during the busiest of times, particularly when large shipments to nearby Pittsburgh, just over 70 miles away, have to be processed. Over the course of a busy season, Fleming’s can process over 14,000 trees. 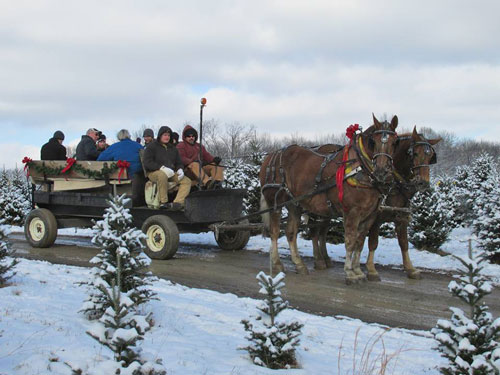 A longstanding tradition at Fleming’s Christmas Tree Farm is its horse-drawn wagon rides.

Fleming’s is now preparing for its 15th annual “Trees for Troops” event. Taking place the first Saturday in December, the event features food vendors, face painting, live music, photos with Santa and the “Meet a Soldier Tent.” J.D. explained, “Meet a Soldier is a big draw. People from the local community can shake hands with and thank soldiers, sailors, airmen, Marines and coast guardsmen. In order to pull this off, we work closely with our local elected officials, state legislators, Chamber of Commerce, tourist bureau, volunteer groups from nearby schools and of course the men and women at Fort Indianatown Gap National Guard Base. People have a wonderful, family friendly time … and they’re able to help out military families by buying a tree, writing a personalized message on its Christmas tag and having it delivered to a military base or to the home of a military serviceperson. It’s a great event.”

This season is something of a bittersweet one for J.D. He is actually in the process of selling the farm soon, and starting his well-earned retirement. “It’s a little sad, because the farm’s been in the family for 75 years,” he said. He promised to help the new owner in keeping up with Trees for Troops and other Fleming’s traditions, especially the horse-drawn wagon rides. “People might think it’s just for special events, but we have those throughout the entire season,” he said. A staple of Fleming’s Family Fun Weekends, guests are treated to an old-fashioned ride around the tree-lined property in an antique red carriage. “It’s an experience and a reminder of a simpler time,” J.D. said.