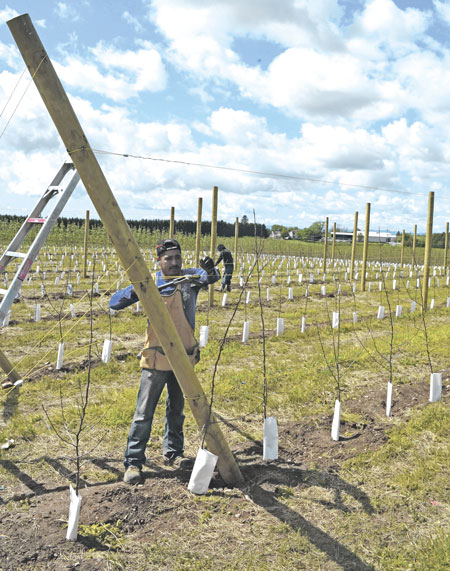 Posts should be set in the ground four feet (deeper depending on soil type). A deeper post provides a more stable base.
Photos by Sally Colby

Establishing a new orchard is no small feat, and comes with significant expense in materials, time and labor.

Thanks to improvements in rootstock and technology for many aspects of orchard management, growers often opt to establish orchards as high-density or tall spindle systems.

Don Seifrit, Penn State horticulture educator in Berks County, said although putting in a high-density orchard isn’t for beginners, both short and long-term payoffs make the investment worthwhile. Since tall spindle orchards are planted with varieties on dwarfing rootstock, the return on investment is faster.

Many growers consider new plantings when they need additional production of a certain variety or when they’ve taken blocks out of production. When asked which varieties to plant in a high-density orchard, Seifrit advised growers to define their market. “There’s no reason to put in a high-density block of Red Delicious if no one is buying them,” he said. “If you have a market for Honeycrisp and need more Honeycrisp production, that’s a great option for a high-density system because you’ll get a nice crop if they’re managed properly.”

The success of a high-density planting depends on variables such as soil type, wind load and planned canopy type. It’s worth spending time planning prior to establishment to make sure all aspects are considered. Seifrit encouraged growers to plan for irrigation if possible. “It’s another establishment cost,” he said, “but you want to make sure trees have water when they need it.”

Prior to starting a high-density planting, it’s beneficial to maintain a cover crop for as many years as possible to help knock back residual inoculum and nematode populations. Soil tests should be up to date, with the appropriate amendments applied at the correct time. 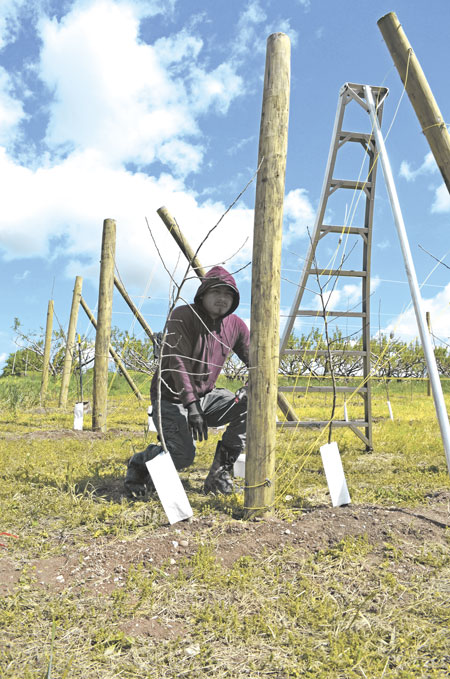 The success of a high-density planting depends on variables such as soil type, wind load and planned canopy type. It’s worth spending time planning prior to establishment to make sure all aspects are considered.

Plan the crop that will become the sod row middle. Seifrit suggested establishing a mix that will stand up to traffic, including tractors for various operations throughout the season, bin trailers and foot traffic during pruning. “A long-term perennial grass is best,” he said. “Depending on what was planted there prior, start with an annual/perennial blend to get the sod established quickly, then a perennial that eventually becomes established.”

Consider soil type and drainage, both of which influence post spacing and depth. Posts should be pressure-treated wood, five to six inches in diameter, driven into the ground with a hydraulic or vibrating post driver. In-line posts (the posts that support the crop between the end posts) should be four to five inches in diameter and placed three to four feet deep. Spacing for posts is critical to the integrity of the trellis, and should be no further apart than 30 feet. If the terrain is particularly hilly or row length exceeds 500 feet, posts should be placed closer than 30 feet.

Posts should be set in the ground four feet (deeper depending on soil type). “A deeper post provides a more stable base,” said Seifrit, adding that there’s math involved in determining where to place anchor posts in relation to in-row posts for maximum stability and proper wire tension. “More posts provide a more stable base and more places to anchor wires, but every post added increases the cost.”

Several methods are used for end of row anchor posts, and growers should select the method that works best for their terrain and soil conditions. If a mechanical planting system was used to plant young trees, posts should be placed after trees are planted. Many growers maintain protection of some kind at the base of young trees to prevent mechanical damage that may occur from mowing or spraying operations.

Wire for the trellis should be high tensile class 3, 12.5 gauge, .01-inch galvanized steel. Wire should be rolled from a spinning jenny that’s properly mounted and secured to avoid potentially injurious recoil as well as kinks that weaken the structure. Workers handling wire should wear gloves, eye protection, tightly woven clothing, long pants and boots. Workers drilling posts should be equipped with ear plugs and hard hats.

Wire tension should be 200 to 250 psi, and not over tensioned or there’s potential to weaken wires. The first wire (closest to the ground) is usually placed at two to 2.5 feet from the ground, and the subsequent four or five wires are placed with the same spacing up the height of the trellis. The height of the top wire, usually around 10 feet, determines the eventual maximum tree height.

Many growers rely on U-pick for greater profit, but are high-density systems suitable? Seifrit said that’s a current topic of discussion in the industry, one that doesn’t yet have a clear answer. “The question is ‘How should we construct a trellis system that’s safe for consumers, safe for employees and maintain structural integrity for trees?’” he said. “At minimum, rows may have to be shorter to accommodate customers and designed for ease and safety in moving wagons in and out of the area.” Shorter rows, and perhaps wider row middles, would add cost to the system, so growers would have to determine if the additional cost would be worthwhile.

Seifrit said it’s worth spending time to properly plan and establish a new high-density system. “The last thing you want is for your system to fall over,” he said. “A catastrophic failure of the trellis system is the worst you could do to it. Spend a little extra money at the start, do a good job and you’ll have something that’s stable for years to come.”