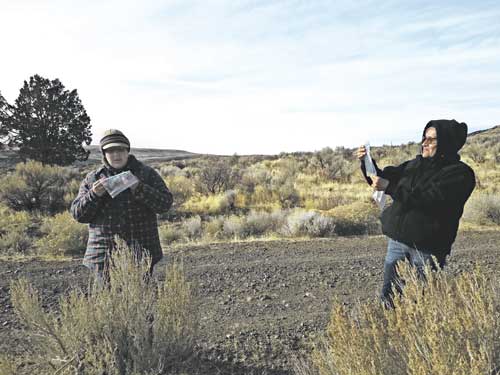 by Catie Joyce-Bulay
The nursery at the Confederated Tribes of the Umatilla Indian Reservation (CTUIR) is not your typical nursery. Sales to landscapers and home gardeners make up only a small portion of their business and they grow only native plants. The nursery’s purpose is to provide indigenous plant species for revegetating natural wildlife habitats in the high desert, upland, wetland and riparian areas of Eastern Oregon and Southwest Washington.
Native plants are of great importance to preserving delicately balanced ecosystems but they also have a special importance to CTUIR, which is made up of the Umatilla, Walla Walla and Cayuse tribes. By cultivating native plants the nursery preserves a heritage that relies on these plants as a food source, and a significant aspect of their daily lives and rituals, explains Gail Redberg, nursery manager.
The nursery, opened in 1996, grows 62 different plant species, ranging from shrubs, forbs and trees from seeds they gather. It is important to gather seeds from the location of the restoration project or at least the same elevation or watershed whenever possible. “The plants that have survived those particular conditions for thousands of years have the genetic ability to thrive in that type of soil and weather conditions,” says Redberg. “The specific traits needed to face the challenges of that site are present within each seed because those are the plants that did well enough to reproduce.”
“Working with native plants requires a lot of thought, planning and care and it’s really rewarding,” says Redberg, a retired science teacher. “When you’re carefully collecting and you’ve been there and know their community, where they’re successful, and try to duplicate that in an artificial environment — it’s challenging and inspiring.” The nursery is always trying to improve their growing techniques and strategies.
Many of the plants are used for restoration sites on tribal lands and along streams to increase salmon habitat. A recent project involved collecting seeds to grow out some culturally significant plants for the Wanaket Wildlife Mitigation Area, about 45 minutes from the nursery. Those collected seeds include Indian celery, turpentine parsley and hemp dogbane, an important fiber Native Americans used to make fish nets and many other items.
The nursery also contracts with county, state and federal agencies as well as private landowners to provide plants for other projects, such as the Whitman Mission, a National Historic Site in Southeast Washington. The National Park Service wanted to increase the number of plants that had cultural uses for the Indians at the time of the missionary settlement, says Redberg. Some of these plants include arrowhead, arrowleaf balsam root, Indian blanketflower, prairie smoke, seep monkey flower, green rabbitbrush and white alder.
The Oregon’s Sage-grouse Initiative is a large project the nursery is working on, in collaboration with the U.S. Fish and Wildlife Service, the Oregon Department of Soil and Water Conservation, the U.S. Forest Service and landowners. The nursery will provide plants for more habitat for the threatened sage-grouse. Sage-grouse are an important indicator species of the overall health of the region’s ecosystem. The nursery was selected in 2016 as the pilot nursery for the project, which would then scale to other regional tribal nurseries.
They are currently working with Roaring Springs Ranch in Central Oregon, the Rocky Mountain Research Station and U.S. Fish and Wildlife Services to select research plots on the ranch’s property to determine the most successful way to revegetate these areas. Revegetation strategies used in the past include broadcasting seed and planting cones. “We’ve recently been discussing planting in island communities. They have all of the components that would be in that area, not just the shrubs, but also the forbs,” says Redberg. The idea is that island communities would then reseed the areas around them.
The nonprofit nursery is using up its remaining 2017 grant funding to complete training and the initial sage planting, and will have to wait and see what comes next. “The word is out that the Department of the Interior is no longer in support of it,” says Redberg, who says it is unfortunate for more than just the sage-grouse.
The nursery also sells excess plants to the general public. When they have the time and capacity, educational outreach and youth training is an important aspect of the nursery, which employs five full-time staff and five seasonal. In the past they have hired and trained tribal youth to work during the summer, and they give tours to community groups and nearby Whitman College classes.
“I really admire [native plants] for their resilience and I think they’re really inspiring,” says Redberg. “They’ve spent a long time becoming what they are, I learn a lot of life lessons from them. They just surprise me all the time.”