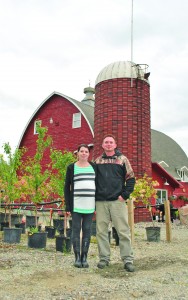 by Emily Enger
Fall planting in the Midwest has seen an increase in perennial purchases this year, according to Turf Technology owner Talya Hein. Though this is good for business, the reason behind the increase isn’t a positive one: last year’s difficult winter killed a majority of people’s plants and trees. “A lot of people lost a lot of stuff,” explained Talya. “There’s a lot of microclimates in northern Minnesota. We are Zone 3, but some people can get away with Zone 4 stuff. But not necessarily this year, if you didn’t properly mulch it.”
Turf Technology (or Turf Tech), in Walker, MN, is a family business owned by Lorne and Talya Hein. Lorne is an arborist and Talya’s background is in retail. What do you get when you combine those skills? A landscaping business and garden center.
The garden center’s most popular products include hostas, Karl Foerster grass and liatris. “We sell a lot of bulk products, too,” said Talya. “Mulch, rock, bark, Class Five. And a lot of dirt.”
But the garden center only makes up about one-eight of Turf Tech. “Landscaping is most of the company,” said Talya. “It’s hard to have just a garden center in this area.”
“Ya,” agreed Lorne. “If we were to try to survive on the garden center alone, it would be very tight, a big change in lifestyle.”
Despite its proportion in the business, Turf Tech does keep the garden center open year-round. During the fall, they bring in pumpkins and straw to sell. They also have store-wide discounts. Of their mums, only a few are left. “Purple is always the most popular color and always the first to sell out,” said Talya. “You’d think it would be yellow, because it’s so bright, but for whatever reason, people prefer purple.”
The end of the summer is a slower season for most garden centers, but for Turf Tech it is even more significant due to Walker being a tourist town. “Every summer we go from a town of 1,000 people to 30,000,” explained Talya. “So we are mostly relying on tourism and people with lake homes.”
But even as autumn sees lake homes closed up, it doesn’t stop these homeowners from doing their fall planting — it simply alters the type of work they want done. During the summer, this crowd buys a lot of pre-made items, such as hanging baskets.They also need irrigation systems, since they aren’t always around to water themselves. “We’ve installed a lot of drip irrigation systems recently,” said Talya. “Drip zones for planters and hanging baskets are the new thing.”
This fall planting is looking good so far, though Talya is cautious. “I don’t always agree that fall is for planting. Last year, for instance, we had a really dry fall but spring was really wet. It’s really what mother nature gives us. I wouldn’t say either/or is better.”
Location, Location, Location
Turf Tech is run out of an iconic red barn, located along the main highway. It is one of the oldest buildings in Walker, put up by a cattle farmer in the 1920s. Since its days as a farmstead, the barn has been a consignment store and a bar, as well. “If you ask anyone in the area, ‘Do you know where the old red barn is?’ they’d know,” said Talya.
Today, the barn serves as office and work space for Turf Tech, with upstairs apartments that the Heins’ rent out. Their gift shop is located in an addition built off the back of the barn.
“The barn really helps us,” said Lorne, in terms of attracting customers. “Also, we’re 30 miles from the nearest box store, which means we get all the impulse buyers.”
Social Media
The social media craze has had its impact, too — especially Pinterest. Although Lorne designs most of the landscaping himself, customers of the garden center will often come with ideas they saw on the internet. Talya says most of it is in regard to planters.
“I think it’s great,” said Talya. “Because often people come in and they have an idea in their head but you’re not exactly sure what they want. So Pinterest makes it easier. I’ve had clients email me a Pinterest picture and say, ‘Can you make me this?’”
And social media isn’t just for customers. Turf Tech operates a Facebook page to keep in contact with its clients. They are also in the middle of a website re-design.
Talya finds her personal social media to be a benefit to the business, as well. “On my personal Pinterest page, I follow other garden centers across the country, just for merchandizing ideas. We also did a wedding recently that was a combination of the bride’s and my Pinterest pages.”
It’s been a good fall for Turf Tech, with many items selling out. And though the weather trends are wetter than last year, that is not necessarily an omen for an easier winter. Whispered predictions of another harsh winter have begun, which means Turf Tech may see a repeat of this year.