Twilight meeting focuses on fertility and weed control in apples 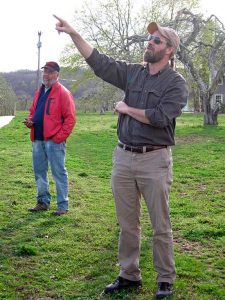 by Kristen M. Castrataro
The Fruit Growers Associations of Rhode Island and Massachusetts held their first combined twilight meeting of the season on April 20, 2017 at Phantom Farms, Cumberland, RI. The focus of the evening was options for controlling weeds in apple orchards and other perennial fruit crops.
Kerri Stenovitch has owned Phantom Farms for six years. Prior to that, she managed the farm for over a decade. The orchard has been in operation for 60 years, and many of the original standard-sized trees are still on the farm. As the old trees started dying out, Stenovitch replaced them with a block of trellised dwarfs on Bud 9 rootstocks.
Stenovitch expects to move increasingly towards the trellis system with one exception. By the driveway she chose to replant standards for aesthetic reasons. “I like the looks,” she admitted with a smile.
The standards certainly create an impressive appearance, but Jon Clements of the University of Massachusetts had praise for her trellis as well. He remarked the block was a “pretty exemplary tall spindle.” Barring a repeat of last April’s freeze, Clements estimated the block would yield half a bushel per tree this fall.
When pruning trellised trees, Clements recommends just cutting out the bigger branches every year. One concern with tall spindle is breakage of leaders. Terry Bradshaw from the University of Vermont advises running twine vertically between the trellis wires and using clips to stabilize the tops. Should some breakage occur, growers can consider it natural growth control.
Growers need to exercise care when pruning. Over-pruning can result in excessive shoot growth which will then create nutrient deficiencies, particularly calcium deficiency. This can lead to bitter pit, which causes dark spots and accelerated decay of the fruit late in the season or in storage.
Nutrient management is challenging in perennial tree crops, so properly preparing the soil prior to planting is essential. According to Bradshaw, it is ideal to till the soil two years prior to planting, treat it with a weed killer, and plant a cover crop like Sorghum Sudangrass to eradicate the weed seedbed. A weed-free soil reduces nutrient loss and pest pressure.
Once the trees are established, foliar analysis should be undertaken every two to three years to assess the presence of both macro and micronutrients. Boron and calcium are two commonly-deficient nutrients.
Clements observed April is the ideal time for a nutrient multi-vitamin. “Why not take the opportunity to put some calcium in the soil? You can’t count on lime as a source of calcium,” he said.
Supplements can be added to the soil or as a foliar spray, but Stenovitch is trying fertigation this year. Bradshaw notes growers are “feeding for the following year” in orchards, so conscientious fertilization is important. Fertigation can be especially effective in supplying micronutrients if delivered weekly from green tip to petal fall.
Stenovitch is also experimenting with weed control this season. She would like to reduce the amount of herbicides she uses as well as to minimize mid-season labor. Since she has more help in early spring and late fall, she decided to lay weed barrier.
A concern with weed barrier is the potential for rodent problems. In organic systems using mulch, Bradshaw has had to use mouse guards on every tree at a cost of $1,600 per acre. In conventional systems, he prefers heavily baiting for mice and voles. He also advises pulling up the weed barrier pre-harvest to allow a chance for natural predation of rodents by coyotes and raptors.
Studies performed by Ian Merwin, Professor Emeritus Cornell, have shown orchards perform best when the area around the trees is growth-free for eight-12 weeks a year. He compared three weed control methodologies: bare earth, mowed sod, and mulched with a post-emergent herbicide. The bare earth resulted in degraded soil health over time. The mowed sod looked attractive, but actually produced the least yield and tree growth. The mulch with post-emergent herbicide demonstrated both an increase in soil health and optimal tree growth and yield.
Some participants expressed a concern about mulch tying up nitrogen needed for the trees. Bradshaw admits it may tie up nitrogen in the top half inch of soil, but has not seen it affecting the deeper soil profile. He uses whole-tree chips in his trial orchards and feels it is a better alternative to trunk-only mulch. He believes the pieces of leaves and the combination of fine and coarse chips adds valuable micronutrients to the soil.
Conventional growers can use a variety of herbicides, though care must be taken not to harm trees. Herbicide damage often does not show up until the following year, so long-term consequences must be considered.
Organic growers technically have the option of organic herbicides, but Bradshaw claims they are ineffective in apple orchards. He remarked, “Don’t waste your money…forget about it.”
Bradshaw does have suggestions for organic growers. “Flame weeding is fun!” he declared. Drawbacks include short-lived efficacy and the fact fires are nearly unavoidable.
Cultivation is also an option, though he believes hand-hoeing is “not worth it.” Bradshaw has worked with a couple of different cultivation machines and offered his assessment of both. The Weed Badger™ is very aggressive and works well in sandy soils, but he has inadvertently ripped up young trees from a moment’s inattention. “You’ve have to be sharp. There’s no room for error,” he said.
The Wonder Weeder is gentler on trees and is reputed to work well in gravelly soils. There are times when multiple passes or additional hand work may be required.
Regardless of your approach to weed control, Bradshaw contends weed control, nutrient management, and tree care must be managed as a whole unit. “Ideally you’re going to use this in an integrated system,” he said.