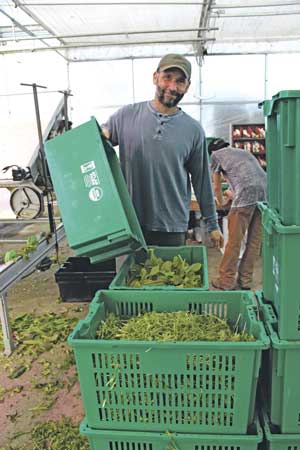 Atlas Farm provides two million pounds of produce year-round for its community, with some brought to Copley Square Farmers Market in Boston during summer. Their produce is sold at farmers markets throughout Western Massachusetts and distributed wholesale to local grocery stores. They also provide produce to the iconic Deerfield Inn, Sunderland’s Blue Heron Restaurant, UMass and to local schools.

Their hub is the Atlas Farm store which is open year-round. “It’s the only one that does that,” said Beth Fraser, farm store manager.

Though snow is on the ground, the farm store offers freshly grown cilantro, spinach, bunched greens and lettuce as part of their salad mix program. One of their greenhouses is currently being seeded with basil, cucumbers and tomatoes for planting in mid-April. They sell root crops of turnips and carrots that were kept in storage in Shelburne so they have root crops consistently.

The farm store opened in 2013 and celebrates its fifth anniversary in May. The owner, Gideon Porth, started his farm in Montague in 2004 on 2.5 acres of rented land, selling CSAs to a growing customer base. His farm’s success allowed him to purchase a 40-acre section of choice river bottom land in South Deerfield, MA and transfer his customer base to the Atlas Farm store. They employ about 25 people year-round and another 25 seasonally.

Instead of the CSAs, customers buy shares with a 10 to 20 percent discount at sign-up, to spend at the farm store. Shareholders receive a newsletter with special discounts, a spring greenhouse tour, a fall appreciation day with sample tastings from vendors at the farm store and haywagon rides twice a year.

“It started small and took off quickly,” said Porth, who finds the store’s success very gratifying.

“The focus is local and organic. It’s very important to [Porth] that he offers space for other farmers and that he can sell their produce,” said Fraser. They seek to carry products with a B Corp label, “the ultimate in sustainable certification. It’s a mecca, if you will,” continued Fraser. “I say to my mother, ‘you’ll never find a lime or a banana at our farm store because they aren’t grown in Massachusetts’.” However, customers can find fairly traded and organic products as well as products made or grown in Massachusetts.

They sell produce wholesale to local companies. Cabbage, carrots, cucumbers, tomatoes and herbs are some of the produce sold to those companies. Then the farm store carries the finished products to sell. “It’s a full circle program,” said Fraser. “That’s one of the best stories, in terms of a farm-shed, to create an added value product that we sell at our store.”

In 2012, they installed a 24-kW photovoltaic system that powers three quarters of the farm’s electricity at their River Road location. This March, in between snowstorms, a new 65kW ground-mounted PV system was installed provide power to the farm store and a greenhouse. They received an Ag-Energy grant from Mass DAR that provided 15 percent of the project’s costs.

They have a few different styles of greenhouses. Their newest one, nicknamed the “big greenhouse”, is a four-bay gutter connected greenhouse measuring 84’ x 144’ with many modern systems in it. It also contains energy curtains and a rolling container system for the benching. “We are also in the process of designing a supplemental lighting plan for this greenhouse to install this summer or fall. Our other five greenhouses range in size from 30’ by 96’ to 35’ by 144’. They are typical ground-to-ground hoophouses,” said Porth.

Greenfield resident Joe Salisbury is greenhouse manager. He noted that they release a quart of ladybugs almost weekly for pest control.

Outside, they use standard sprinkler irrigation, some drip irrigation and an irrigation traveler.

“Our irrigation traveler is a Kifco T30-660 with a Nelson gun. We love it. It allows us to irrigate a very large area with minimal set-up time and once irrigation is complete the field doesn’t need to be broken down like traditional sprinkler irrigation requires. It does have some limitations. It’s not very good for germinating small seeded crops like carrots and it takes a long time to complete a run, but all things considered…it’s improved our operation greatly.”

What is the best thing about the progression of the farm? Porth said, “Seeing the growth at our farm store and enthusiasm from our local community about what we are doing.”