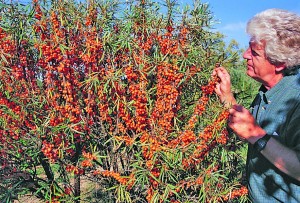 by Bill and Mary Weaver
Jim Gilbert, of One Green World Nursery in Portland, OR, has devoted 35 years of his life to tracking down, studying, and working with unusual, very cold-hardy fruits. He has traveled to Siberia, China, northern Japan, Germany, and the Ukraine, among other countries, to find promising cultivars and confer with breeders about very cold hardy unusual fruits that would do well in the Midwest.
Gilbert recommends that growers who try unusual fruits set up a sort of festival at the time of their harvest, generating excitement in the orchard. In addition to samples of fresh fruit, offer ice cream, jams and jellies, and juices made using the fruits.
Honeyberries
Honeyberries are little known in the U.S. Native to Japan, Russia, and Siberia, the attractive honeysuckle-related shrubs are hardy to -40°F and below. Some honeysuckles are invasive, but this one is not.
“Northern Japan has made an industry out of honeyberries,” commented Gilbert. “They look like an elongated huckleberry, with juice that’s dark like ink. In northern Japan, you can buy jam, juice, and other products made from them.
“No diseases bother honeyberries that we’ve discovered, but you do need to protect the berries from the birds. Our company was one of the first to bring honeyberry plants to the U.S.”
Cornelian Cherries
Cornelian Cherries also have definite possibilities for growers. These relatives of the dogwood tree are hardy to -30 F. “The fruit is beautiful. When you sit down to a dish of them, it looks like you’re eating red jewels.”
Those “jewels” are about 1 1/2 inches long, with an elongated seed in the middle. “They make great preserves, and taste a little like a cherry.”
The plants are attractive enough to grow as an ornamental shrub, but in eastern Europe and the Ukraine, breeders have developed varieties with quite delicious fruit.
Sea Berries
Sea berries, or Sea Buckthorn, are another little-known fruit with a lot of potential. Hardy to -40 F, they’re popular in Germany for juicing, making a substitute for orange juice that is high in vitamins A, C, and E, and both the fruit and the seeds contain a healthful oil.
The tart, tiny berries literally cover the branches, making them look like a wall of orange. In addition, this useful plant also fixes nitrogen, and therefore requires no fertilization and improves the soil in which it is grown.
The sea berry plant is bothered by no pests or diseases, and its only requirement is drip irrigation if the soil gets dry.
The tiny berries, which grow on second year fruiting twigs, could be time-consuming to pick, but the German growers have developed a method of harvest that neatly solves this problem. Half the plants are picked every year.
Harvest workers cut off the berry-covered branches and freeze them. They shake the frozen branches with berries against the side of a bucket or barrel, and presto! All the tiny berries fall off the branches. The fruit is run through a blower to get rid of the leaves and twigs.
In two years, new fruiting twigs will bear more berries on the harvested plants. In the meantime, the next year, the other half of the plants will be harvested.
The self-supporting shrubs are wind pollinated, so male plants are planted around the orchard perimeter, and every fifth plant within the orchard is a male. A mature female plant, pruned to 8 ft. tall by 5 ft. wide, can yield 70 to 80 pounds of fruit.
Breeding work has been done on sea berries in Canada, Russia, and China, and an International Conference on sea berries was held in Germany this past October.
American Persimmons
American persimmons, a native American fruit, are, Gilbert believes, “underutilized and under-researched. It’s a larger tree, so you must keep the trees pruned,” he cautioned.
Fortunately for the future of this useful tree, an amateur enthusiast, Jim Claypool, established a 10 acre persimmon collection in Illinois. The collection is currently maintained by Claypool’s son and interested friends.
“Some varieties we found in that collection,” said Gilbert, “appear to be self-fertile and have no seeds. From this collection, we have selected and named two varieties. Both are early ripening, and hardy for the midwest.”
Quite a few growers in Illinois, Indiana, Kentucky, and other states sell the persimmon fruit. One grower in Indiana is shipping persimmon pulp to markets in Chicago and the midwest. “They shipped 6,000 pounds to that market last year, and can’t meet the demand,” commented Gilbert.
Pawpaws
Pawpaws, hardy to -25 degrees, are the largest native American fruit. “You can pick them when they first start to ripen, and they’ll ripen off the tree, so the very tender skin and flesh of the fully ripe fruit aren’t yet a problem for handling and shipping.”
Research has been done on pawpaws at Kentucky State University, and they have developed their own varieties. Neal Peterson has also developed several varieties.
“The flavor of pawpaw is sweet and fruity, almost banana-like, and it makes delicious ice cream. The tree is a relative of the tropical custard apple.”
Hardy Kiwi
Hardy Kiwi is native to eastern Russia and China. Hardy to -25 F, Hardy Kiwi is not as well-known as its fuzzy cousin. The fruit is smaller than the fuzzy Kiwi, but has smooth, tender skin and is eaten like table grapes.
“They should be easy to grow in the midwest,” Gilbert commented. “They are pest and disease resistant, and they’re very productive. One female plant can produce 100 pounds or more of fruit, and they’re planted 200 plants to the acre, although one out of eight plants needs to be a male for pollination.”
As they are all vines, the main expense in establishing the orchard is the trellis. Once the vines are established, all they need is normal maintenance and pruning.
“To determine when to pick the fruit, measure the brix. When the brix hits 8 percent, pick everything. You can store the fruit for over a month in cold storage.”