USDA’s Local Food Marketing Practices Survey: What Can We Learn? 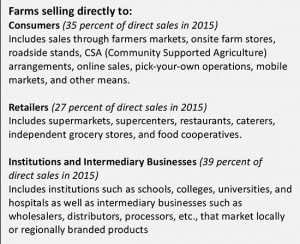 by Kristen Park
The 2014 Farm Bill directed the United States Department of Agriculture to survey the efforts of farmers who produce and sell product directly to consumers, retailers, and institutions. Surveys were completed in 2015 and the USDA released their report in December 2016.
The report indicates that more than 167,000 U.S. farms produced and sold products using direct marketing practices. Direct marketed sales from these farms totaled $8.7 billion. Foodstuffs sold included fruits and vegetables, protein, dairy, and value-added products.
To put these numbers into greater context, in 2014 (the latest year these numbers are available), the USDA reported consumers spent $1.6 trillion on all food and beverages, including food purchased for home consumption as well as for away from home consumption. Direct marketed sales are approximately one-half of one percent of total consumer dollars spent on food and beverages.
Regardless of the fact that direct sales are a fraction of the total food sales, $8.7 billion creates jobs and investments and helps fill a demand for locally-produced food.
Some people are very interested in distinctive food items offered through direct-to consumer purchasing opportunities. Additional benefits to the farm sector can include maintaining heirloom breeds and unique varieties of animals and plants that otherwise might not be sustained by commercial producers. These direct marketers may also introduce consumers to new varieties that are not being produced in large enough quantities to be sold through large retailers.
What can we learn from the survey?
A wide array commodity products are sold through direct marketing channels, including raw commodities as well as value-added forms. Products from meat cattle were sold by more operations. Although some farms marketing direct may grow and sell both fruits and vegetables, if fruit and vegetable operations are combined, the number of fruit and vegetable farm operations would be over 92,000.
California, with the largest population of over 39 million and also one of the largest states with a landmass of 163,696 square miles, topped the direct marketing charts with $2.8 billion in sales (Table 2). At a glance, these leading states have strong agricultural production and reasonably dense populations to support direct sales.
The greatest portion of direct-marketed sales, 38.7 percent, went to intermediaries and institutions that market and sell locally-branded products (Figure 1). These intermediaries and institutions are wholesalers and hubs that may aggregate, market and distribute locally-branded products. Another third (35 percent) were sold directly to consumers and the remainder, while 26.7 percent were sold to retailers, which includes grocery and restaurant retailers.
The survey results state, “that more than 80 percent of all direct market food sales occurred within 100 miles of the farm.” Most farms selling to consumers were less than 20 miles from their largest grossing marketplace. These findings suggest that the majority of sales generated by these direct marketing activities are within a 2-hour drive from the farms and that the economic activity is closer to home.
Of those farms selling directly to consumers, on-site farm stands generated more sales (43.7 percent) than other venues or practices. Farmers markets generated roughly one-quarter of total sales (Figure 2). Community Supported Agriculture, or CSAs, contributed only 7.5 percent of the total direct marketing sales. CSA sales are not for every farm, but for those farms who do sell CSA shares, these shares contribute a sizeable portion, 26.2 percent, of their income.
Farms selling food directly to institutions and intermediates, such as wholesalers or food hubs who locally-branded the product, brought in the most revenue at $3.4 billion. Approximately 115,000 operations with direct-to-consumer sales, e.g. on-farm stores, U-pick, farmers markets, etc. had total sales of $3 billion. Sales directly to retailers were $2.3 billion from over 23,000 operations nationwide.
Most respondents, 59 percent, had direct marketed sales of less than $10,000 per farm, and only 16.3 percent of respondents generated direct marketed sales over $50,000 (Figure 3). Not reported are sales that are not direct marketed.
The operators with direct marketed sales of less than $10,000 generated only 3.5 percent of the U.S. directed marketed sales, while operators with over $1 million in direct sales generated 28.7 percent of U.S. directed marketed sales.
This project was the first to survey farm operations about their direct marketing practices. This information can serve to benchmark the activities of direct marketers and can help generate ideas and discussion around marketing potential of firms marketing source-identified foods.
The Local Food Marketing Practices Survey was conducted in cooperation with USDA’s Know Your Farmer, Know Your Food (KYF2) Initiative. You can find local and regional supply chain resources on the KYF2 website and use the KYF2 Compass to locate USDA investments in your community.
For additional survey results, visit www.agcensus.usda.gov/Publications/Local_Food/index.php or the Quick Stats database at https://quickstats.nass.usda.gov.
Past articles are available at http://dyson.cornell.edu/outreach/smart-marketing-newsletter.