Using biological fungicides in the greenhouse: tools to make you a better grower 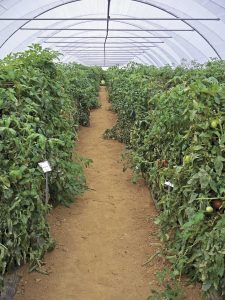 by Steve Wagner
Since Steve Bogash arrived at the Penn State Extension, and started doing a lot of applied research work at the southeast farm, he and his team had been looking for tools to manage some of their most difficult diseases. “We just don’t have fungicides from the commercial world, from the conventional world, to manage them,” he says. “And when we do, often times they are very expensive and you have to reapply again and again. Moving to biological is kind of a natural way for us to go, first in doing tomatoes, bell peppers and cucumbers in high tunnels, but we also use them in our transplant production house. They just seem to solve problems that we don’t have other answers for, and they last for so darn long.” In learning to use them, he added, the curve can be very steep.
Bogash then referenced what is commonly known as the Disease Triangle:

Bogash says diseases are very nimble; they mutate and evolve, so the battle must be constantly waged. New diseases are hunted and found. By introducing the right fungicide, you can attack the pathogen and rid the plant of disease. “We do everything we can to manage diseases like Phytophthora,” Bogash said. “We use clean plants, we use clean potting media, all the rest of it. By introducing one of the biologicals — generally we’re talking RootShield, RootShield Plus more likely — I believe we can get a modicum of phytophthora control. We really have a long way to go with Phytophthora.”
Turning to long-term disease control, Bogash says, “because they colonize, they infect the epidermis or they live in the rhizosphere; they loom around the root zone, and they grow out with it.” Bogash mentioned competition, whereby largely beneficial fungi occupy the root zone. There’s just no way for an organism to get in because of the occupation of the beneficial fungi. That means you are using it pre-emptively.
“Most of my experience is in vegetables. Well, there was a tomato greenhouse that I got into; it was one of the first clients that I was assigned to when I came into the Cumberland Valley. Every year in that greenhouse they were growing in the same soil, every year they were planting their tomatoes, and they would lose about 10 percent of them by the time they got to the end of the growing season. I took some of the plants up to the Department of Agriculture, and they diagnosed it as Verticillium, which is really tough to manage. Their response to this was to fumigate the soil using methyl bromide.” Methyl bromide presents its own challenges. It was only getting 10 to 14 inches deep in the soil, which works well at the beginning of the season. But once the tomato plants got to be three feet tall their roots would reach into the zone that never got fumigated. Every year the same thing happened with Verticillium, and they would start to lose a plant here and three plants there. “So,” Bogash says, “I talked them into trying the original Root Shield product. The first year we tried it, we lost zero plants with no fumigation.” Enter antagonisms. Antagonisms can be parasitic where the biological control agent attacks and feeds on the pathogen. A bio agent must be present before or at the same time as the pathogen. “One of our master gardeners came to me a couple years ago while I was still down in Chambersburg, and they were losing a row of bell peppers.” The culprit was Fusarium, a fungus known for its wilting properties. “We took the plants to PDA because one plant after another was dying,” Bogash recounted. “I gave them a couple tablespoons of my precious Root Shield, and they stopped losing plants in that row. These products work in unusual ways.”
In referencing antibiosis, Bogash mentioned that while working with transplants at the Landisville research farm, he would not grow or transplant without inoculating the pot.
He said, “Many plants when exposed to certain biological products will produce salicylic and jasmonic acid pathways which use all of these things inside the plant to make them a lot tougher. There is a potential to protect the plant from Botrytis on aerial parts when inoculated with a beneficial through the roots.”