It seems like an oxymoron, right? A healthy virus? But that’s what researchers at the University of California-San Diego and Case Western Reserve University are looking at. They discovered a plant virus is able to deliver pesticide molecules deeper below the ground – to places normally beyond pesticide reach.

This breakthrough could help growers better manage difficult pests such as parasitic nematodes, which prey on plant roots, with less pesticide.

Nicole Steinmetz, a professor of nanoengineering at UC San Diego, admitted, “It sounds counterintuitive that we can use a plant virus to treat plant health. This is an emerging field of research in nanotechnology showing that we can use plant viruses as pesticide delivery systems.” She said it’s similar to how doctors use nanoparticles in medicine to target drugs toward sites of disease and reduce side effects in patients.

Pesticides tend to be very sticky molecules when applied in the field, Steinmetz explained. They bind strongly to organic matter in the soil, making it difficult for them to penetrate down into the root level where pests like nematodes reside. So, to make pesticides work, growers end up applying larger amounts, which cause harmful residual build-up in the soil which can then leach into groundwater.

To address this problem, Steinmetz and her team discovered that a particular plant virus, tobacco mild green mosaic virus (TMGMV), can easily transport small amounts of pesticide deep into soil. TMGMV carried an insecticide 30 centimeters below the surface in their study. 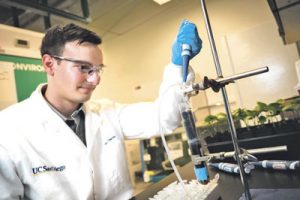 Other plant viruses were tested as well. Cowpea mosaic virus also carried insecticides 30 centimeters below the surface, but it can only carry a fraction of the payload TMGMV can. The research team is hypothesizing that nanoparticle geometry and surface chemistry could play roles in how it moves through the soil. TMGMV’s tubular structure might partly explain why it travels farther than other nanoparticles that are spherical in shape.

“We’re taking concepts we’ve learned from nanomedicine, where we’re developing nanoparticles for targeted drug delivery, and applying them to agriculture,” Steinmetz said. “In the medical setting, we also see that nanocarriers with skinny, tubular shapes and diverse surface chemistries can navigate the body better. It makes sense that a plant virus can more easily penetrate and move through the soil – probably because that’s where it naturally resides.”

The bad news: TMGMV can infect plants of the Solanaceae family such as tomatoes, potatoes and eggplants. The good news: It is benign to thousands of other plant species. Additionally, the virus is only transmitted by actual contact between two plants, not through the air. Therefore, if one field is being treated with TMGMV, nearby fields would not be at risk for contamination, the researchers said.

The research team has also developed a computational model that will help them predict how other pesticide nanocarriers behave in the soil, which will greatly cut down on their experimental workload and help them hone in on useful nanoparticles more quickly.

As for what’s next, Steinmetz and her team are testing TMGMV nanoparticles with varying pesticide loads. The goal is to test them in the field in the near future – and hopefully discover some solid solutions for those dealing with those pesky nematodes.