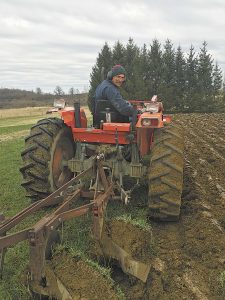 by Sally Colby
Sometimes a farm seems close to perfect, but needs just a bit of help.
That’s what Will and Judy Stevens found when they purchased a former dairy farm in Shoreham, VT. “Prior to buying this farm in 1984, we grew apples, so we were learning about apples,” said Judy. “When we got married, we asked for apple trees as a wedding gift. We were interested in cider and old time varieties, and Golden Russet was one of those.” Although they have a small orchard of primarily disease-resistant varieties, the focus of the operation is organic vegetables.
After the required three-year transition, Golden Russet Farm & Greenhouses became certified organic in 1987. The farm includes 84 acres; 10 of which is loamy soil used for vegetable production. Some of the remaining ground is in crop rotation for insect and disease control, and the heavy clay soil ridge is used for pasture and hay.
To build the soil, the Stevens’ started adding compost. “We established relationships with area dairy farms to obtain materials for composting,” said Judy. “It took about three years to bring soils back to life. At the same time, we were figuring out the markets for our vegetables.”
Judy recalls that as they were starting to farm, there was a national increase in people asking for organic produce. They were growing organic because that’s what they knew and were comfortable with.
Will and Judy start seedlings in early March in two greenhouses that are used primarily for bedding plants, which have also become a big part of their business.
The first crops are alliums, including onions, leeks and shallots. Other early seed starts include pansies, rosemary and asparagus. Next, crops such as tomatoes, peppers, cucumbers, melons and brassicas are started for transplants. Weekly seedings into July ensure an extended growing season.
Bedding plants are started in the greenhouse and are ready for customers when Golden Russet Farm opens for the season in late April. “We have a steady, loyal following of people who come to purchase plants,” said Judy. “We’ll cut back hours in late June, and by the time we reach the end of July, the greenhouses are empty.
Having empty greenhouses is convenient for the farm’s garlic crop. “We grow a lot of garlic here,” said Judy, adding that garlic planted at the end of October to early November is harvested in mid-to late July. “Part of our garlic harvest involves spreading it out on the tables in the greenhouse for curing. Once it’s cured and the stems are dried down, we bundle it and store it in a shed until it’s sold.”
Soil tests are taken on various fields every few years, but the Stevens have seen a steady increase in quality since composting, plus cover crops, including rye, wheat, red clover, vetch and buckwheat also help build the soil.
After the soil is prepared, raised beds are formed. The Stevens have been growing on more raised beds since the big storms of 2011 and 2012 when summer brought heavy rain and drowned many crops. “Since then, we’ve been creating higher raised beds,” said Judy. She added that water tends to pond on low spots in heavy soils, so plants are healthier when they’re off the ground.
Golden Russet Farms also grows a variety of winter squash and pie pumpkins, which they have been selling to a local brewing company for pumpkin ale production.
Cucurbit crops are protected with floating row cover. “It keeps them warm and keeps the striped cucumber beetle off,” said Judy, adding that the pest can really hammer a crop. “Then when the plants get tall, we’ll pull the cover off for one weeding, put it back on, then pull it off when the plants start to bloom. At that point, the row cover stays off. We’ll come through and cultivate once more, then undersow with hairy vetch – just before the pumpkins start to run. Then while they’re running, the vetch is germinating, and at the same time the entire field fills in with pumpkins. When the pumpkin foliage dies back in fall, the vetch is thick and lush. In spring, the field is nice and thick and green, then it’s plowed under.”
Golden Russet Farms includes a 35-share CSA. Judy says while that aspect of the farm isn’t large, it’s important, and has a loyal following. The CSA, which starts in mid June, allows subscribers to come once a week and bag up produce they select according to a blackboard list. Members can choose items according to what they like, and can also pick field-grown flowers, cherry tomatoes and herbs. The farm also offers a fall share, which customers pick up every other week.
Both Will and Judy are active civically, and involved in a variety of agricultural organizations including the Champlain Valley Farmers Coalition, Vermont Fresh Network, NOFA (Northeast Organic Farming Association) and the Vermont Vegetable and Berry Association. The farm is certified organic through VOF (Vermont Organic Farmers). Judy believes it’s important to be involved with such organizations to learn about the latest in growing and to network with other growers. “From the very beginning, it’s how we learned to do what we’re doing.”