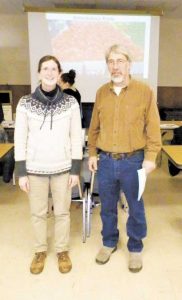 by George Looby
Recently the UConn Extension team of Jude Boucher, Extension Educator and Joan Allen, Assistant Extension Educator serving as plant pathologist, presented informative sessions designed to bring growers up to speed regarding the latest in control measures against the wide range of pests.
The common spotted asparagus beetle was the first pest covered. One rule that applies across all species and varieties is to maintain a high level of sanitation in the garden. Old plant material and debris should be cleaned up and disposed of. Depending on the particular plant material involved, some may be composted, but if it is infected with a pest with a long life cycle it is important not to compost. It is important to know the life cycle of the pest being discarded. If you’re not familiar help is available through the staff of your local extension.
Cabbage is a member of the Brassica family and as such is afflicted by several moths that give rise to caterpillars that render the heads unsalable due to the unsightly holes in the leaves. Scouting is the term used for visually inspecting all plantings to insure that there is no evidence of pest damage. Any evidence of abnormal activity should prompt the inspector to take immediate action and initiate control measures. Those operators with organic programs need to develop a sense of what their customer base will tolerate in the way of visible damage before looking for alternative markets. The use of selective insecticides is helpful to avoid harming the natural enemies of the pest involved.
The cucurbits are a most important family of plants including cucumbers and squash and they are prone to a variety of problems that include mildews, beetles, borers and wilts. From the standpoint of broad overall preventative management it seems that trickle irrigation is by far the preferred method of watering, wet leaves are an invitation to a host of problems. Good air circulation goes hand in hand with good irrigation practices, in the absence of moisture many fungal problems become less of an issue. Jude strongly suggested that Phytophthora blight is the worst problem in this group of plants. It appears as a flour-like growth on fruits and vines progressing to fruit rot and vine collapse. One of the characteristics that make it difficult to manage is that it can survive as resting spores for up to 10 years in the soil. A good preventative program should include crop rotation, avoiding any areas where water might tend to accumulate even for short periods of time. Water control at all levels is critical to the management of this pest. Soil applied fungicides can be incorporated into the control program depending on the severity of the problem.
Tomatoes are one of the most popular crops grown and probably one of the more closely watched of any. Crop rotation remains one of the most cost effective practices that can be used to prevent any number of problems. Early blight can be less of a problem if this practice is employed. Pruning and weed control can assist the plant in directing needed nutrients to the fruit and in addition allow for good air circulation — so important in preventing air borne diseases on the plant. Late blight in tomatoes can be one of the most devastating plant diseases. In the matter of a few days all of the plants in a plot can be wiped out along with all of the profit. At the first sign of any suspected late blight the information should be forwarded to Extension so the information can be widely disseminated quickly. All suspect foliage should be destroyed and not composted. Samples should be forwarded to a diagnostic lab for confirmation. Keep potato plantings as far as possible from tomatoes and use only locally grown transplants. There are a number of fungicides available on the market that will aid in the control of this aggressive fungus.
Sweet corn is probably the most widely grown vegetable crop in New England and certainly contributes greatly to overall vegetable farm income. UConn has developed an action scale that signals when spraying should begin based on the amount of infestation observed on the ears and the species of worm being observed.
The onion thrip overwinters as either an adult or in the nymph stage. It grows rapidly from egg to adult and feeds at the base of the leaves, which makes reaching them with sprays difficult. It is interesting that plant resistance to this pest is based on color, with red onions most susceptible, yellow intermediate and white the most resistant.
Basil is an increasingly popular crop widely favored by gourmet chefs. This crop can be highly lucrative when grown to meet the needs of the trade but it too can have its problems. Downy mildew can be seed borne so heat-treating the seed is a useful tool in prevention.
Beets, chard and spinach have some pests that affect their growth and their salability. Included in this group are Cercospora leaf spot, flea beetles and leafminers. Among the control measures suggested for the leafminer is a biological control in the form of a wasp parasitoid. Highly specialized insects, often wasps are increasingly used for the control of several plant pests. Great care is taken in the evaluation of these insects to insure that their beneficial attributes far outweigh any potential harm they might do where they are newly introduced. For those producers who operate under organic standards kaolin clay, pyrethrin and azadirachtin are suggested as control materials.
The meeting served to provide those in attendance with a strong platform on which to build a good pest control program.