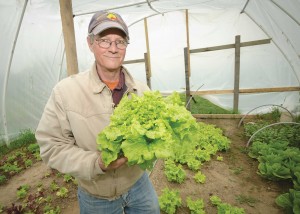 by Sally Colby
Mark Kastner’s corporate job led him to seek a stress-relieving hobby, so he pursued propagating perennials. But he credits his grandmother’s influence for the main reason he’s a successful year-round greenhouse vegetable grower today. Kastner and his wife Gayleen grow a variety of vegetable crops year-round at Hillcrest Farms in Eaton Rapids, MI.
“We cut our teeth on low tunnels,” he said. “We grow greens all winter in those. We didn’t make enough to pay the bills, but we learned enough to know that we could. From there we went to open field farming.”
Because of the extremes in climate from year to year, Kastner knew he’d have to deal with a variety of weather conditions. “We started with a small homemade high tunnel, about 24’ x 48”, made of PVC plastic,” he said. “That blew away the first year. We replaced it with a steel frame, and we’ve added a high tunnel every year.”
Hillcrest Farms is situated near the Grand River, and Kastner says that soil types vary widely. “There’s sandy soil and a lot of muck, and I have heavy clay that I’ve been amending for about seven years,” he said. “We will be using some organically certified compost from a large operation north of the farm, and we also make our own compost.”
Kastner has the compost tested every year at Michigan State University for nutrient content, then adds amendments such as potash, kelp and green sand as indicated by test results. In the past, part of the compost included animal manure, but Kastner eliminated that when he started to work toward certified organic status.
Winter crops include spinach, chard, carrots, beets, radishes and three kinds of kale. “We’re known for our Romaine lettuce,” said Kastner. “That’s the one crop that won’t grow in January or February because its one of the few crops that can’t grow in less than ten hours of daylight.
Kastner explains that the limiting factor for what he can grow isn’t temperature, but hours of daylight. “In our latitude, we go below ten hours (of daylight) around November 10th, and we don’t come back until February 5th,” he said. “The goal is to have the crops 80 to 90 percent mature going into November first. They slow down, and they’ll hold their maturity in the cold months so we can harvest all year long. The ground inside the houses never freezes. The plants can freeze and survive, but they cannot tolerate frost. What the row cover does is protect from frost.”
Right now, Kastner is growing year-round in three high tunnels, none of which are heated. A fourth tunnel is framed and ready for plastic, and will be partially heated for a nursery. In past years, Kastner has used a single sheet of plastic over the hoops, but plans to re-cover the tunnels with two layers of plastic with three inches of air between the layers.
Seeds are started in a germination room with artificial lighting. Kastner recently planted alliums, including onions and leeks, for transplant in about ten weeks. He’ll start direct seeding the first week of February. Also recently started are four varieties of head lettuce, three kale varieties, beets in flats for transplant, collards and Asian greens. “We mix Asian greens with baby lettuce for a spring mix,” he said. “It’s a brassica salad mix, and the lettuce takes some of the bite out of it. It goes over real well in February.”
After harvesting the last of a crop such as baby lettuce, Kastner starts to prepare for the next crop that will be direct seeded. He incorporates compost, keeps the bed watered and encourages weeds to grow. “We let the weeds germinate, then just before we direct seed, we use a torch to flame the weeds,” he said. “We’ll plant a brassica salad mix, carrots, more baby lettuce and radishes the first week of February. Then the following week, in the germination room, we’ll start more head lettuce, eggplant, tomatoes, peppers and scallions. Peppers and cucumbers don’t like cold, but with tomatoes, as long as I can maintain 46 degrees, they’ll be fine. I can transplant tomatoes the second week in April under row cover and they’ll be fine.”
Tomatoes are started from seed, and are ready about the second or third week of June, and he starts peppers both early and mid-season for a wide harvest window. Kastner grows most tomatoes and peppers in tunnels to keep diseases at bay. “The premium tomatoes are ready about a week before July 4th,” he said. We grow several bush type tomatoes outdoors but they are still under a row cover to keep spores out.”
The Kastners sell produce at three farmers’ markets during the summer growing season, and sell through three wholesale accounts. They also grow produce for a small rural school system, and for the kitchen of a small community hospital. Hillcrest Farms has a small CSA, and also markets online. “Every week I publish a menu of what’s available, and the customer emails me back with an order,” Kasten explained. “We have four distribution points where we deliver the produce. We like that in winter because it’s very efficient –we only harvest what has been sold, so there’s minimal waste. The customer is very happy because the product is less than 24 hours old.”
As a Vietnam veteran, Kastner is involved in the newly-launched Veteran Farmer Coalition chapter in Michigan. He’s willing to help any veterans who might want a mentor or need help starting a similar business.
Although Kastner has been growing for six years, he notes that many practices have changed. He and his wife Gayleen are in the process of becoming GAP (Good Agricultural Practices) certified. “I’m one of the oldest growers around here,” said Kastner. “But I’m also willing to change through the years.”