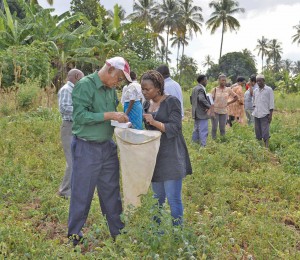 BLACKSBURG, VA — The rapid spread of a highly destructive invasive species has prompted a Virginia Tech scientist to lead the charge in issuing a set of recommendations, including quarantine measures, designed to thwart the advance of the pest around the globe.
The insect, established in Panama and Costa Rica, is moving northward but has not yet arrived in the United States. Its potential arrival is a big concern among U.S. government agricultural officials.

“Our domestic tomato industry could be severely affected,” Devaiah Muruvanda, senior risk manager for the U.S. Department of Agriculture, says. “The United States is taking it so seriously, we haven’t even given permits to do research, in order to prevent any possibility of the insect’s escape.”
The pest in question is the South American tomato leafminer, Tuta absoluta. No larger than an eyelash, the tiny moth spread from its native Latin America to Europe in 2006 and later crossed the Mediterranean to Africa.
Now threatening Asia, the moth strikes at the world’s most commercially important horticulture crop, the tomato, valuable to small-holder farmers around the world. Its path is destructive and its advance rapid.
“When the tomato leafminer strikes, it can cause between 80 and 100 percent crop loss unless proper management technologies are adopted,” says Muni Muniappan, entomologist and director of the Virginia Tech-led Integrated Pest Management Innovation Lab. “The moth can’t be completely eradicated. The best you can do is control it.”
Muniappan convened a group of plant protection scientists at the 18th International Plant Protection Congress in Berlin in August. Scientists and policymakers who attended represented the Middle East, Latin America, Europe and the United States.
The team’s recommendations include:
• Educate administrators, scientists, and the public about the impending danger of the coming Tuta absoluta invasion.
• Adopt quarantine measures to prevent its introduction. These would include such steps as not allowing the import of tomatoes with stems, leaves, or a calyx.
• Set up monitoring programs in border areas using pheromone traps.
• Explore the effectiveness of using natural enemies of Tuta absoluta, imported from South America, home of the moth, to control the pest.
• Form regional and global networks to inform each other and the world about Tuta absoluta discoveries.
World production of tomato is approximately 163 million tons annually, and production of the crop covers 10 million acres worldwide, Muniappan says. In 2011, Tuta absoluta infested 404,000 acres of cultivated tomato, representing 40 percent of the world’s crop. In the United States, the tomato industry accounts for more than $2 billion in annual farm cash receipts, according to the USDA.
The economic impact of this insect has already been severe in countries where it has become established. In Spain, its presence led to an increase of $209 per acre per season related to pest management. In central Argentina, management of Tuta accounts for 70 percent of the pest management costs for late-season tomato crops.
As director of an agricultural development program funded by the U.S. Agency for International Development, Muniappan noticed the insect’s arrival in Senegal in 2012, where the program conducted research. Since then, the program has held half a dozen workshops to raise awareness about the invasive species and help public officials and farmers prepare to minimize the destruction. “We have held workshops on Tuta in Senegal, Ethiopia, Nepal, Bangladesh, Kenya and Tanzania in order to sensitize administrators in countries where it’s set to invade and to provide management information to countries where it’s already established,” he said.
The scientists also recommended setting up a working group, which was formed in the days following the Berlin symposium. Expected to participate are Shoki Al-Dobai, the regional crop protection officer of the Food and Agricultural Organization of the United Nations for Near East and North Africa, based in Rome, and Ahmed Hussein El-Heneidy, an entomologist with the Plant Protection Research Institute, based in Egypt.
The working group will help raise awareness of the urgency of combating the pest and will serve to establish a place to share new discoveries regarding its control, Muniappan says.